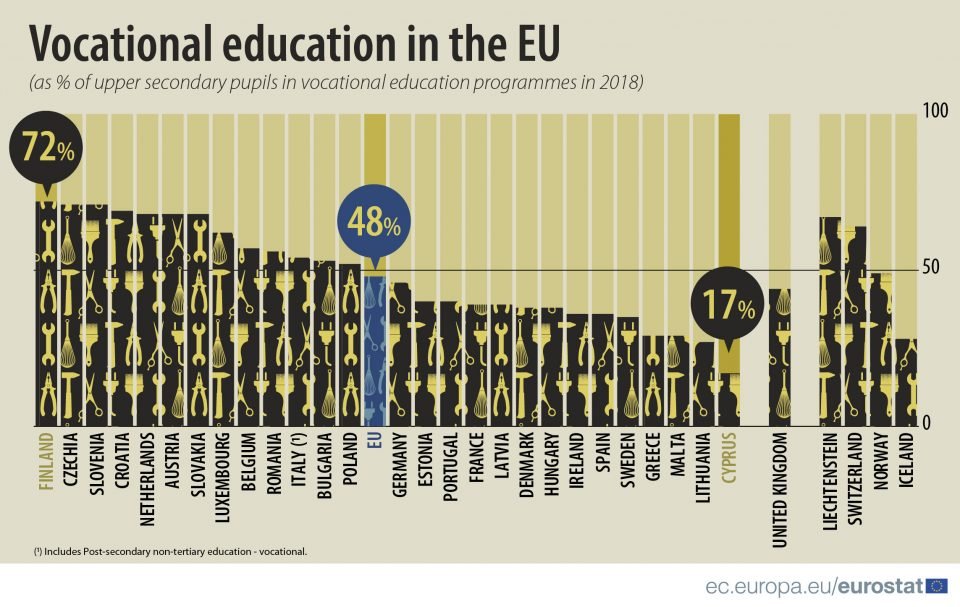 Cyprus has by far the lowest proportion of upper secondary pupils enrolled in vocational education in the EU, the latest Eurostat figures show.

Figures of less than a third of pupils studying such programmes were recorded in only four EU member states in 2018: in Cyprus (17 per cent), Lithuania (27 per cent), Greece and Malta (both 29 per cent).

In 13 EU countries, more than half of all upper secondary pupils studied vocational programmes in 2018. Finland registered the highest proportion of pupils at upper secondary level, 72 per cent, ahead of Czechia and Slovenia, both with 71 per cent.

Eurostat not only looked at countries, but also compared regions. This does not change the position of Cyprus however.

In 2018, a peak of 76 per cent was recorded in Severozápad (Czechia), more than four times the lowest share, 17 per cent, recorded in Cyprus.

17.7 million pupils were studying at upper secondary level in the European Union, out of which more than 8.5 million (or 48 per cent) were enrolled in vocational education.

Vocational education at upper secondary level was somewhat dominated by males, who accounted for 58 per cent of pupils on this type of programme.

In Cyprus, by far most of them are male. Of the 4,711 students involved in vocational studies in Cyprus two years ago, just 1,090 were female.

Students usually enter upper secondary school programmes between the ages of 14 and 16, the Eurostat report explained.

“Such programmes may have work-based components (e.g. apprenticeships, dual-system education programmes). Successful completion of such programmes leads to labour market-relevant, vocational qualifications acknowledged as occupationally oriented by the relevant national authorities and/or the labour market.”