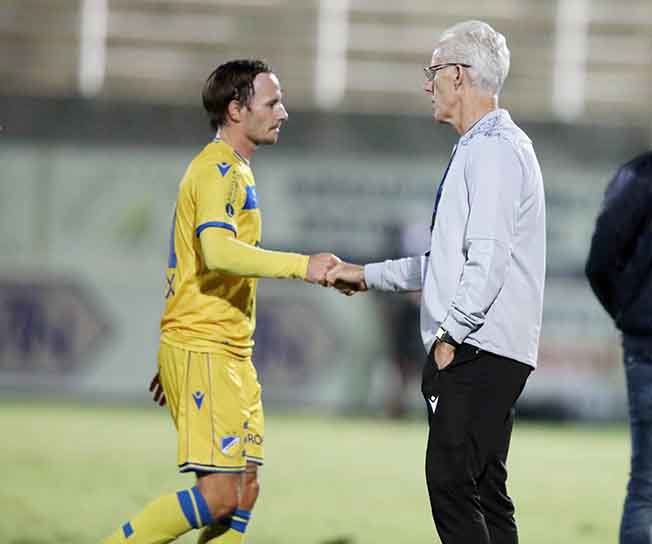 In what was newly-appointed manager Mick McCarthy’s first game in charge of Apoel, the Nicosia club dropped more points as the game against Ethnikos in Achna ended in a goalless draw

One of the most unpredictable, competitive, and intriguing seasons in the Cyprus first division continued over the weekend.

After setbacks for all but one of the top five clubs in the league and a stuttering start to Mick McCarthy’s Apoel tenure, it has become nearly impossible to pick a heavy favourite for this year’s title.

Apollon Limassol, the club who topped the table before the tenth round of games had begun, lost at home to newly-promoted Karmiotissa. In an oddly deflating performance, the hosts took the lead in the first half only for the visiting minnows to flip the game on its head after a brace from midfielder Mohamed Sassi.

The Tunisian player was the source of post-match ire as certain fans used their social media accounts to voice their complaints against Sassi’s celebration during the second goal, with fans claiming that Sassi alluded to the Grey Wolves, a Turkish far-right organisation.

Sassi quickly clarified things by using his own Facebook account to explain that the gesture he made during his celebration was paying homage to a rapper named Mabe 7ocho whom Sassi is friends with.

“I have been informed by my club that my celebration was linked to a Turkish organisation. I want to clarify that I have nothing to do with them and that I did not want to offend any Cypriot citizens. It was an unfortunate incident as the celebration was a message to a friend of mine”, Sassi said.

On Apollon’s side, coach Avgousti said that the result was an accurate reflection of both teams’ performances.

“Congratulations to Karmiotissa for a fair win. We were not good”, Avgousti said in the post-game press conference.

“Things are different this year. Teams don’t have major differences between them and more points will be dropped by all of the clubs. Today we had a major setback and we will not hide from our performance. We apologise to our fans”, the Apollon manager later added.

In what was newly-appointed manager McCarthy’s first game in charge of Apoel, the Nicosia club dropped more points as the game against Ethnikos in Achna ended in a goalless draw. It would of course be naive and unreasonable to demand a noticeable improvement in performances from McCarthy with the manager having had so little time to work with his squad.

McCarthy provided comprehensive replies to the questions posed to him by the journalists attending the post-match press conference.

“It was a difficult game for us as the opponent fought very hard and deserves congratulations for their performance. This was my first game and it’s not easy to change everything in five days. Some things pleased me while other things didn’t. I always say if you can’t find a goal then at least try not to lose”, said McCarthy in his brief summary of the game.

McCarthy was asked to comment on Apoel’s current table position, with the 28-time league winners finding themselves in tenth place with ten points, the same as Karmiotissa, albeit with a game in hand.

“I know full well where Apoel usually are and where they need to be. This cannot be done with their name alone. You have to win that right on the pitch and be the best team and we’ve obviously not done that as of yet”, McCarthy said.

“We are in a difficult period. Only myself, the players, my colleagues and the rest of the staff can take us out of this situation. People think we’ll win just because we are the most successful club. It doesn’t go like that. We have to win, we have to work hard and be better than we were tonight”, the Irishman added.

Speaking on his first impressions on both Apoel and Cyprus, McCarthy was complimentary but focused on the future.

“Apoel are a fantastic club, from the training centre to the professionalism that exists within it. There is respect across Cyprus and Europe due to its European success. This is a competitive league with some very good players. I look forward to my time here and I hope it’s long and successful”, McCarthy said.

Elsewhere during the weekend, Anorthosis proved to be the major winners of the round after their 1-0 win over AEK Larnaca. Kostakis Artymatas’ thumping volley from distance was the major highlight of the game, with the Cypriot player scoring a very special goal for his club.

Pafos put an end to AEL’s winning streak with a 1-0 win at home, although AEL manager Dusan Kerkez can take some positives from his side’s performance despite the negative result. AEL created enough chances to have merited an equaliser which bodes well for their upcoming fixtures.

The same cannot be said for Omonia, whose form appears to be in freefall since their win over Ethnikos Achnas on October 18. Since then the Nicosia club have drawn three times and lost an equal number of games. Domestically, Omonia have taken two out of an available nine points over the past three games.

Following Omonia’s goalless draw with Doxa on Sunday, manager Henning Berg acknowledged his side’s dip in performance in the second half. “The way we finished the game was disappointing”, Berg said.

“I’m worried we’re not scoring as a team. It’s not a matter of one position but a general issue. We have to improve. It’s too early to be talking about the January transfer window”, the Omonia manager added.