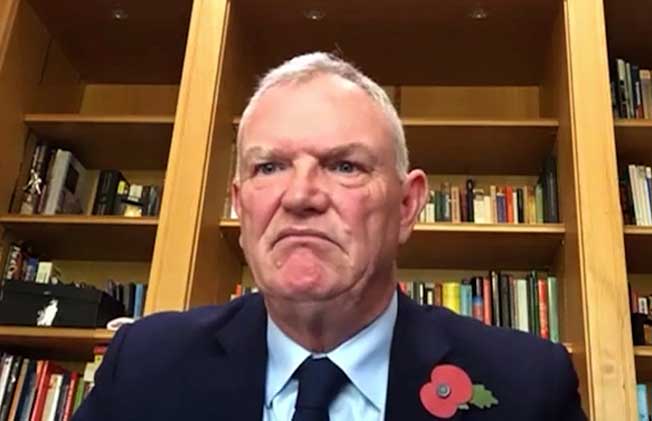 Screengrab taken from PA Video of Chairman of The Football Association Greg Clarke speaking to the Department for Digital, Culture, Media and Sport select committee via video link

Greg Clarke was met with a storm of criticism for the offensive remarks which led to his resignation as chairman of the Football Association.

The 63-year-old was earlier forced to apologise after he used the word “coloured” to describe black players and insinuated that being gay was a “life choice”.

His controversial comments, before a Digital, Culture, Media and Sport committee, were branded “harmful”, “archaic” and “deeply offensive”.

Clarke was also condemned by anti-discrimination group Kick It Out after saying that black and South Asian people had “different career interests” from each other, and drew complaints for saying a women’s coach had told him that the lack of women’s goalkeepers was due to girls not liking the ball being kicked at them.

Bhandari said on Sky Sports News: “We are not just talking about anybody here, we are talking about the leader of our national game on a really major strategic issue for the FA, which is driving greater diversity and inclusion, making everyone feel they belong in the game.

“These were archaic attitudes which were really revealing themselves in comment after comment – a well-briefed chair or CEO would know exactly how to navigate that.

“It is not as if this is the first time, there have been previous incidents – like referring to institutional racism as ‘fluff’.

“What it shows is there is an attitude underlying which is really not the right attitude to be leading the English game.”

The FA found itself embroiled in major controversy just two weeks after it launched a new diversity code, which aims to ensure more candidates from ethnic minorities can land top jobs.

In announcing Clarke’s departure, the FA said: “We would also like to reaffirm that as an organisation, we are absolutely committed to doing everything we can to promote diversity, address inequality, and tackle all forms of discrimination in the game.”

Clarke revealed he had already been actively considering standing down for some time.

He added in a statement: “My unacceptable words in front of Parliament were a disservice to our game and to those who watch, play, referee and administer it. This has crystallised my resolve to move on.

“I am deeply saddened that I have offended those diverse communities in football that I and others worked so hard to include.

“I would like to thank my friends and colleagues in the game for the wisdom and counsel they have shared over the years and resign from the FA with immediate effect.”

Clarke is also one of three FIFA vice-presidents representing UEFA and reports on Tuesday night suggested he will step away from that role, too.

He said: “I will reiterate my point that we do still have a very, very long way to go, and there is no shame in that.

“Football is such a diverse community that we have to be aware of what is appropriate for one another and we have to be careful and mindful of the terminology which we use.

“I won’t comment too much on that, but I am sure there will be other people around the country who are angry as well.”

Former Aston Villa forward Gabriel Agbonlahor tweeted: “So the FA chairman now calls us coloured footballers. How will racism end with people like him at the top?”, while former West Ham defender Anton Ferdinand said: “Clearly education is needed at all levels.”

Equality campaigners Stonewall UK said: “The language we use matters, which is why it’s a shame Greg Clarke used such a harmful phrase like ‘life choice’ to describe being gay.

“It was also deeply upsetting to hear the archaic words and stereotypes he used to describe Black and Asian people, along with sexist stereotypes about players from the women’s game.”

Football v Homophobia said: “The idea that being gay is a life choice is an outdated concept that many people will find deeply offensive.

“There are some people who will use a statement like this from the FA chairman as a way to prop up their homophobia.”

Peter McCormick, chairman of the FA’s professional game board, has been named interim FA chairman.

Collins said on Twitter: “Greg Clarke’s departure as FA chairman should be a moment for fundamental reform of the governance of football in England.

“We need a body that shows real leadership on player development and welfare, fan engagement, inclusion and financial sustainability.”