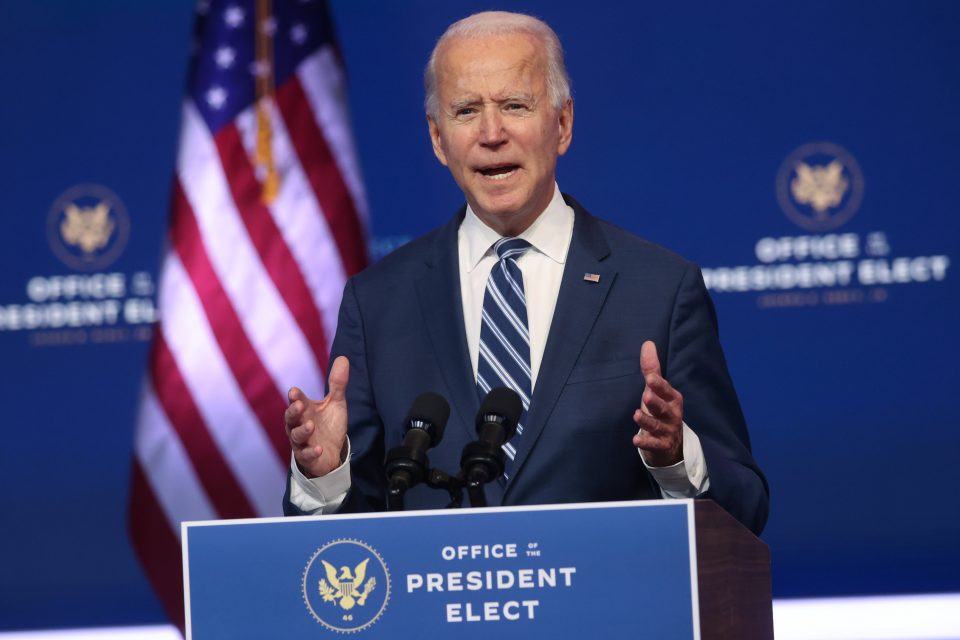 US President-elect Joe Biden during a brief news conference in Wilmington, Delaware on Tuesday

President-elect Joe Biden said on Tuesday that nothing would stop the transfer of power in the U.S. government, even as President Donald Trump says without evidence that last week’s election was marred by fraud and some of his Republican allies back investigations.

Biden smiled when asked about comments by Secretary of State Mike Pompeo predicting a second Trump administration, as world leaders including British Prime Minister Boris Johnson offered the Democrat congratulations and pledged to work together.

Biden secured the more than 270 votes in the Electoral College he needs to take the presidency by winning Pennsylvania on Saturday after four tense days of counting, which was delayed by a surge in mail-in ballots due to the coronavirus pandemic.

Trump has made baseless claims that fraud was marring the results. Attorney-General William Barr and Senate Republican Majority Leader Mitch McConnell have signalled they back Trump’s right to launch a legal challenge to the result in several battleground states such as Pennsylvania.

Biden said in a speech in Delaware that his team was pushing ahead with forming a new administration to take over on U.S. Inauguration Day, Jan. 20, 2021, no matter what.

“We’re going to be going, moving along, in a consistent manner, putting together our administration, the White House, and reviewing who we’re going to pick for the Cabinet positions, and nothing’s going to stop that,” he said. Biden said it was an “embarrassment” that Trump has not conceded the election.

A Trump loyalist, Pompeo told a news conference at the State Department on Tuesday that once every “legal” vote was counted, it would lead to a “second Trump administration.”

“I think the whole Republican Party has been put in a position with a few notable exceptions of being mildly intimidated by the sitting president, but there’s only one president at a time,” he said.

Britain’s Johnson, a conservative like Trump whose blustery style is often likened to that of the president, said he spoke to Biden on Tuesday by phone about working together.

“I look forward to strengthening the partnership between our countries and to working with him on our shared priorities – from tackling climate change, to promoting democracy and building back better from the pandemic,” Johnson tweeted.