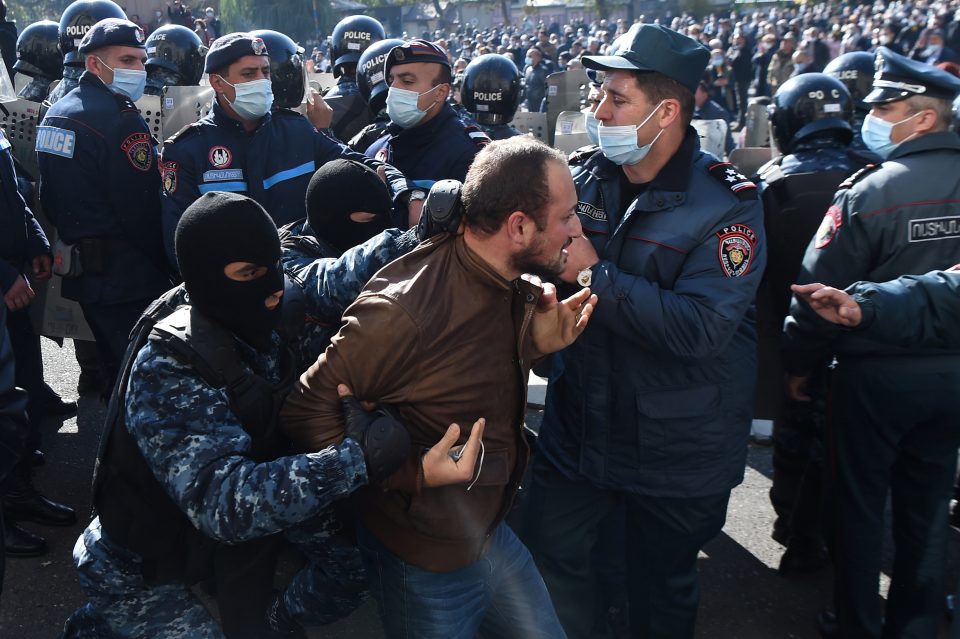 A man is taken away by law enforcement officers during an opposition rally to demand the resignation of Armenian Prime Minister Nikol Pashinyan following the signing of a deal to end the military conflict over the Nagorno-Karabakh region, in Yerevan, Armenia November 11, 2020. Lusi Sargsyan/Photolure via REUTERS ATTENTION EDITORS - THIS IMAGE HAS BEEN SUPPLIED BY A THIRD PARTY.

The fate of Armenia‘s prime minister hung in the balance on Wednesday after parliament agreed to discuss protesters’ demands for his resignation over a ceasefire that secured territorial advances for Azerbaijan in Nagorno-Karabakh.

The ceasefire, announced on Tuesday, ended six weeks of fighting – the worst in the mountain enclave for decades – and has been celebrated as a victory in Azerbaijan.

Thousands of Armenians protested in the capital Yerevan, demanding Prime Minister Nikol Pashinyan step down, and several hundred marched on parliament. Some chanted “Nikol is a traitor”. Others shouted: “Nikol, leave.”

Pashinyan has said he had no choice but to sign the agreement to prevent further territorial losses.

But, after protesters set a midnight deadline for Pashinyan to quit, parliament announced it would hold a special session on Wednesday evening to discuss the calls for his resignation.

The ceasefire halted military action in and around Nagorno-Karabakh, an enclave internationally recognised as part of Azerbaijan but populated by ethnic Armenians. Under the agreement, 2,000 Russian peacekeeping troops are being deployed to the region.

Since the early 1990s, ethnic Armenians had held military control over all of Nagorno-Karabakh and substantial swaths of Azeri territory surrounding it. They have now lost much of the enclave itself as well as the surrounding territory.

Pashinyan said he concluded the peace deal under pressure from his army. Nagorno-Karabakh’s leader said there had been a risk of Azerbaijan taking control of the whole enclave following the fall of its second biggest city, Shushi, known by Azeris as Shusha.

“This is a big failure and disaster,” Pashinyan said on Tuesday. He said he was taking personal responsibility for the setbacks, but he rejected calls to step down.

A number of protesters were arrested, including Gagik Tsarukyan, leader of the opposition Prosperous Armenia party, according to a Facebook post by Hripsime Arakelian, a member of his party. Prosperous Armenia is the second biggest faction in parliament.

Russian peacekeepers – who are due to stay in the region for five years – started leaving Russia on Tuesday and are now controlling the Lachin corridor, a mountain pass linking Armenia and Nagorno-Karabakh, the Russian army said.

For Russia, which has a defence pact with Armenia and a military base there, securing the ceasefire deal sent a signal that it is still the main arbiter in the energy-producing South Caucasus, which it sees as its own backyard.

Turkey also flexed its muscles during the conflict, providing diplomatic support and arms supplies for Azerbaijan. It was not involved in mediating the ceasefire deal and has not contributed any peacekeepers.

But Turkey and Russia signed an agreement establishing a joint centre to monitor the ceasefire in Nagorno-Karabakh on Wednesday and will work together there, Turkish President Tayyip Erdogan said.

Though Azerbaijan has hailed the ceasefire agreement as a victory, some Azeris are frustrated that Azeri forces stopped fighting before regaining control of all of Nagorno-Karabakh. Other Azeris are wary about the arrival of peacekeepers from Russia, which dominated the region in Soviet times.

Diko MP says he has evidence of migration dept corruption