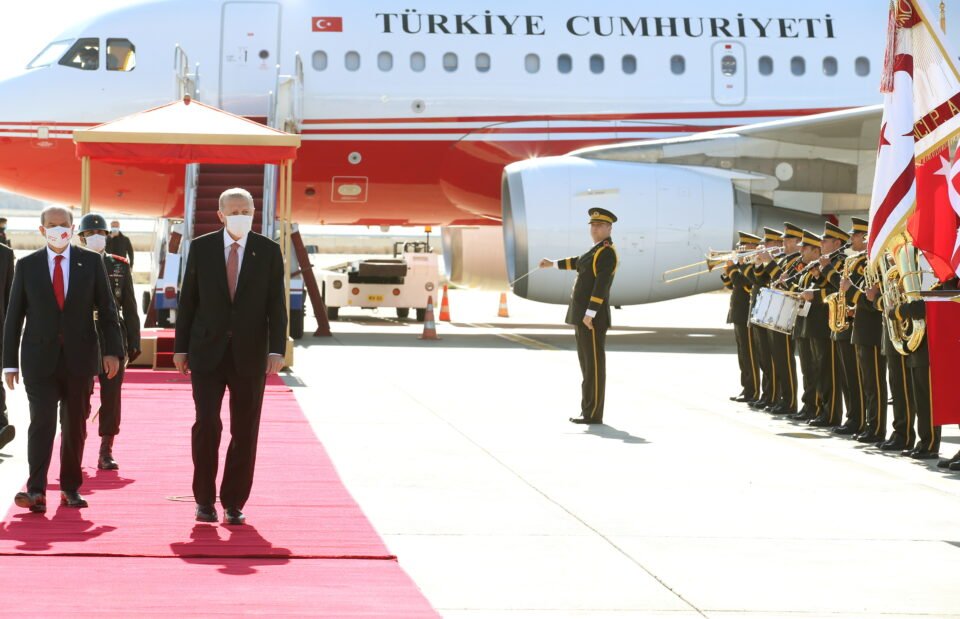 Turkish President Tayyip Erdogan arrived in the north at about 12.30 on Sunday, where he is to view a parade to mark the 37th anniversary of the unilateral declaration of independence of the ‘Turkish Republic of Northern Cyprus’.

Erdogan was accompanied by his wife Emine, former president of the Turkish parliament, former prime minister, the minister of defence and the communications minister. Foreign Minister Mevlut Cavusoglu arrived in Cyprus on Friday.

An hour earlier chairman of the Nationalist Movement Party Devlet Bahçeli arrived on a different plane.

At around 2pm Erdogan is expected to visit the recently reopened area of Varosha beach, where he had suggested a picnic be held.

Draconian security measures have been set up in Varosha and anyone entering has to provide a negative PCR test.

A coast guard frigate is stationed in the water off Varosha.

He is also expected to officially open several buildings.

Organisers of a rally in the north protesting the visit by Erdogan were told the by the police there that it was illegal.

But in a post on social media, Abdullah Korkmazhan said the rally would go ahead as planned.

It is due to start at 2pm from central Nicosia before moving to the ‘parliament’ in the north and the Turkish ‘embassy’.

Erdogan will be accompanied by newly elected Turkish Cypriot leader Ersin Tatar, who was backed by Ankara during the recent election in the north.

Turkey is alone in recognising northern Cyprus as an independent state.

Turkey’s government said Erdogan and Tatar would discuss how to strengthen ties and also the situation in the broader Eastern Mediterranean, where Turkey has clashed this year with Cyprus, Greece and the European Union over offshore territorial rights.

The EU has threatened to impose sanctions on Turkey next month over illegal oil and gas exploration at sea.

Erdogan has said separate administrations were the only solution after UN-mediated peace talks broke down in 2017. Ankara has proposed an informal meeting between Turkey, Greece, Turkish and Greek Cypriots and the United Nations.

Meanwhile, Diko organised a collection of signatures in Larnaca against the opening of Varosha beach.