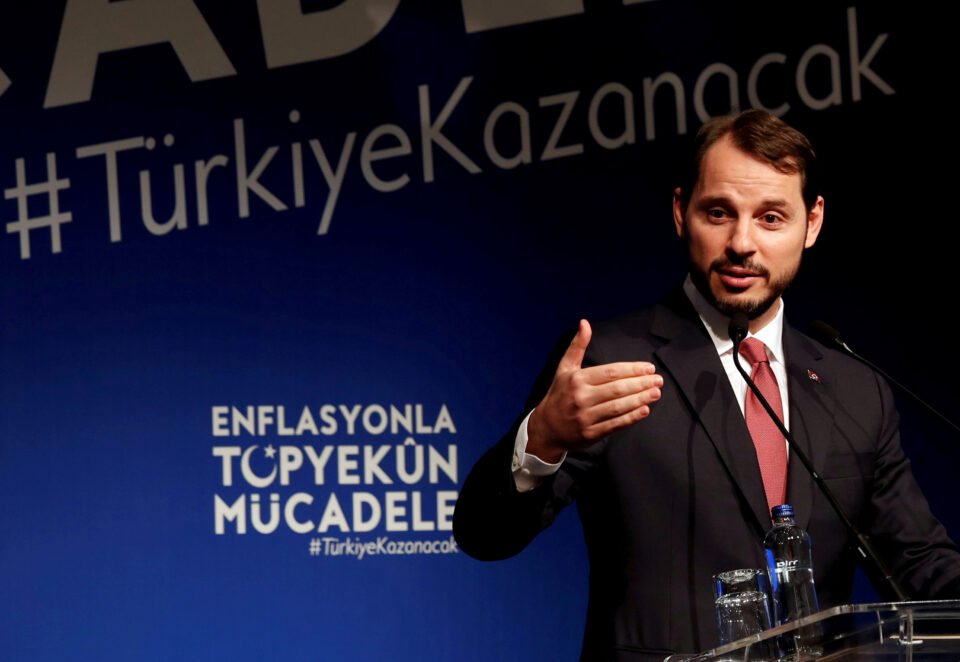 When news that the former had been fired and the latter had resigned reached the trading floor, ‘good riddance’ seems to have been the general response.

The battered Turkish lira regained some of its earlier losses, while international investors – who had been fleeing Turkey while Uysal and Albayrak were in post – put some $2.7 billion back into Turkish assets, according to Turkey’s President Recip Tayyip Erdogan.

That statistic was the only public comment the Turkish leader – Albayrak’s father-in-law – made on his son-in-law’s resignation, too, further showing just how far Albayrak had fallen.

Indeed, as Erdogan’s widely tipped successor, long-time close confidante and ally within both the presidential family and the ruling Justice and Development Party (AKP), Albayrak’s position had long seemed unassailable.

Leader of a faction within the AKP known as the Pelikan (‘Pelican’) group, named after the website he ran that once brought down a prime minister, Albayrak also had major business connections and powerful friends, both inside Turkey and abroad.

“It’s a tectonic shift,” Ozgur Unluhisarcilik, the German Marshal Fund’s Ankara Office Director, told the Cyprus Mail. “Albayrak had placed his own people all over the Turkish bureaucracy and in private and state companies and corporations. His removal is therefore something much bigger than just a change in finance minister.”

Indeed, his departure signals a growing crisis within the AKP and the presidential palace in particular, as a continuing failure to address the troubled Turkish economy batters public support for Erdogan’s 18-year rule.

The career of Turkey’s now former finance minister is closely bound up with the trajectory of much of recent Turkish politics.

A 2004 marriage to Erdogan’s daughter, Esra, cemented Albayrak’s place in the Erdogan family, while a long association with one of Turkey’s largest conglomerates – Calik Holding – placed him at the centre of the construction and energy-driven boom that characterised the early years of AKP rule.

In 2015, he was elected to parliament for the party and almost immediately became energy minister. In 2018, Erdogan then merged the finance and economy ministries and put Albayrak in charge of this new and powerful combined entity.

Yet, this rapid rise was not without its shadowy side.

Albayrak’s name appears in the ongoing Halkbank case in the US, which alleges official Turkish involvement in Iranian sanctions busting.

In 2016, a slew of e-mails was also released by Wikileaks, allegedly showing him to be connected to a company involved in oil smuggling from Isis-controlled territories in Syria and Iraq.

Yet, despite the disquiet these cases caused, Albayrak was also repeatedly able to demonstrate his usefulness to Erdogan.

Albayrak’s connections to Donald Trump’s son-in-law, Jared Kushner, for example, are widely alleged to have helped stall prosecution of the Halkbank case during Trump’s administration.

At the same time, where there was criticism of ‘the Groom’, as Albayrak was also known, little of this could appear publicly, as Albayrak’s brother, Serhat, controls a range of pro-AKP media, such as Sabah, Turkey’s highest circulation newspaper, and ATV television.

Yet, “There were a growing number of disgruntled voices within the AKP against Albayrak’s leadership of things he was not supposed to be leading,” Erdem Aydin, director of RDM Advisory in London, told the Cyprus Mail.

This included organising the ‘palace coup’ that deposed former prime minister Ahmet Davutoglu in 2016, along with pushing for the re-run Istanbul municipal elections last year. This badly backfired on the AKP, as the opposition gained votes. Albayrak also announced September’s Black Sea natural gas discovery, overshadowing the energy minister himself.

For all the criticism, however, Albayrak continued to have Erdogan’s strong support.

In particular, the two saw eye-to-eye on the economy, which has long been the backbone of popular support for Erdogan and the AKP.

The early years of party leadership saw major growth in Turkey’s GDP and standard of living. In recent years, however, that GDP has been in steady decline, falling from $950.6 billion in 2013 to $754.71 billion in 2019, according to World Bank figures.

In recent years too, Erdogan has insisted on an unconventional economic policy based on low interest rates and cheap credit. Much of this credit has gone into sectors dominated by conglomerates like the Calik Group.

“There are basically five construction companies that get all the public private partnership contracts,” says Aydin, “and they are all linked closely to the presidential palace.”

Erdogan has often ordered central bank governors – who are supposed to be independent – to keep rates low, even when economic orthodoxy dictates they should be given a hike. Refusal to follow orders, however, has often led to dismissal.

This appears to have been what happened to Murat Uysal – and, many believe, may also have happened to Albayrak.

The finance minister appears to have begun distancing himself recently from Erdogan’s low interest rate policy, sensing growing criticism within the party of how the economy was being managed.

This has been voiced by both the conservative wing of the AKP – represented by old lslamist ‘grey beard’ Bulent Arinc – and the more liberal wing, many of whom were reportedly threatening to leave the AKP and join splinter parties headed by former economy minister Ali Babacan and former prime minister Davutoglu.

At the same time, “Erdogan began to realise the economy was losing him votes,” says Aydin.

The appointment of Agbal as new central bank governor and Lutfi Elvan, a party veteran and Erdogan loyalist, as the new finance minister may therefore be part of a move by Erdogan towards more conventional economic policy.

This view will likely be tested as soon as November 19, though, when the central bank decides whether or not to hike interest rates.

For some analysts, though, these moves are unlikely to be more than a short term fix, as Agbal and Elvan will continue to answer to Erdogan – and “Erdogan is the party and the government – he dominates the state,” Soner Cagaptay, author of Erdogan’s Empire: Turkey and the politics of the Middle East and Turkey Programme director at the Washington Institute, told the Cyprus Mail.

“Erdogan pulls all the strings,” agrees Aydin. “Erdogan is all about cheap credit to finance construction and economic growth, so he’ll continue to push for lower interest rates and when the lira falls again, he’ll just sack another governor.”

How long this process can continue, however, remains uncertain.

Meanwhile, Albayrak continues to have a powerful network around him.

“He and Erdogan will have to find some kind of modus vivendi,” says Unluhisarcilik. “But the balance has shifted – and the outcome is still uncertain.”

Tales from the Coffeeshop: Martial law and the olive pickers

Erdogan’s Varosha visit another spur for rethink over refugee properties