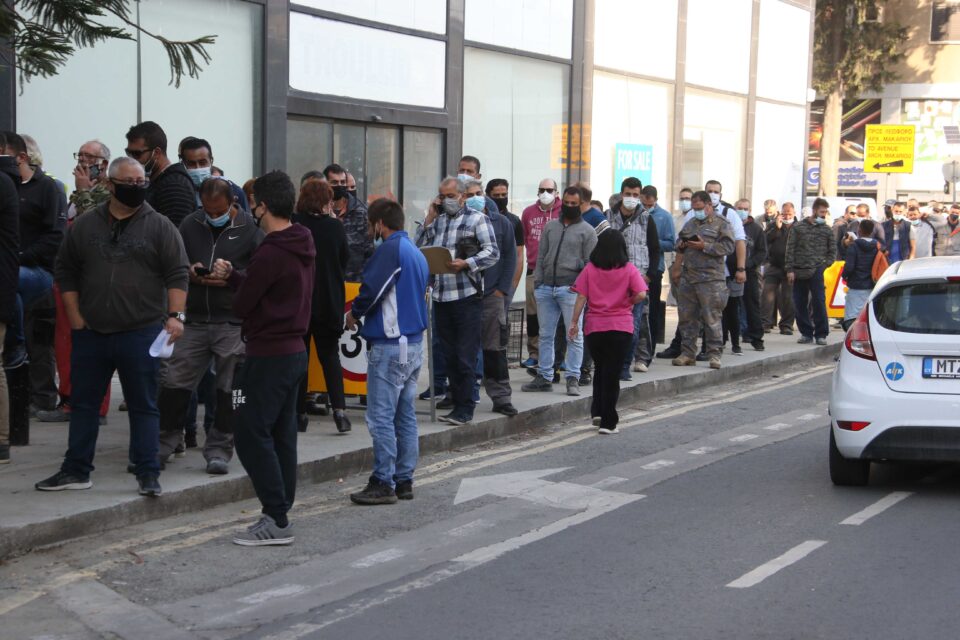 The government was slammed on Monday for its lack of preparation as thousands of people queued up for Covid testing, and kilometres-long queues of motorists clogged up the highway to and from the lockdown district of Paphos and Limassol.

The health ministry later apologised to the public but said its primary aim was to protect public health.

So bad were the queues that political parties jumped in to criticise the government for its lack of preparation ahead of what would become draconian checks, which they announced last week but still could not seem to manage.

“Photos of queues on the highway, overcrowding outside coronavirus test laboratories, and lack of information on key measures raises questions about the government’s readiness to handle the crisis, eight months after it began,” the Green Party said in a statement.

“At a time when the majority of Cypriot citizens are trying to do the right thing against this invisible enemy, the government is called on to do the obvious, not to subject citizens to unnecessary suffering due to poor organisation and management.”

According to the newest measures, as of Wednesday, those moving to and from Limassol and Paphos for work in addition to having a note from their employers must also have a negative PCR test not more than a week old. The issues began on Sunday when huge queues had formed along Spyros Kyprianou Street in Limassol of people needing to have the tests, which ran out by lunchtime.

The chaos continued Monday morning in the affected areas, and in the capital, as photos of long lines of people waiting to get tested were widely shared on social media. Monday afternoon thousands of people, according to CNA, were still queueing up in Limassol either in their cars or on foot to be tested at a special station in the car park of the former Pissarides supermarket. Testing was due to end at 7pm and reopen Tuesday morning. Some who had queued up told the news agency they feared they would not be able to get the test. Some also expressed concern over that the situation made social distancing impossible.

The early-morning fiasco prompted Justice Minister Emily Yiolitis to try and quell people’s fears that they would ultimately not be able to travel to or from the lockdown areas to go to work.

Speaking by the roadblock near Governor’s Beach in the Limassol area, Yiolitis acknowledged that the situation was unacceptable. Workers should not have to wait in such long queues and efforts were underway to reduce the load, she said.

She made special mention of teachers trying to get to work on time, only to get stuck in the queues.

At the same time, Yiolitis did however reiterate that the ban on movement to and from Paphos and Limassol was essential – emphasising that journeys to the districts should only be made in exceptional circumstances.

“I understand that some people need and must [travel], for our country to function, and we will assist them,” she said. “I have given instructions so as to avoid queues forming.”

She said checks would become more randomised – at least during peak hours, rather than checking every motorist. “During peak hours, controls will involve sampling. There can be no long queues or allowing people to suffer,” the minister added.

The director of traffic police, Yiannakis Georgiou, said that delays were observed at specific times and as indepth checks were being carried out.

“The traffic jam was from 6:45am to 7:15am and then from 7:45am to 8:15am,” he said, adding that after the new instructions were implemented the issue was eventually resolved.

He also called on drivers to have all the necessary documents readily available and advised the paperwork to be placed on the car’s dashboard.

Socialist Edek said in a statement that people in Limassol were perfectly justified in protesting the situation and urged the government to think again.

“It is now self-evident that the way in which the measures were implemented is causing incredible inconvenience to citizens. We call on the government to reconsider and propose other measures,” the party said.

Diko said the Disy government was clearly unprepared to manage the pandemic.

“Every passing day shows how unprepared and inadequate the government is,” the party said. 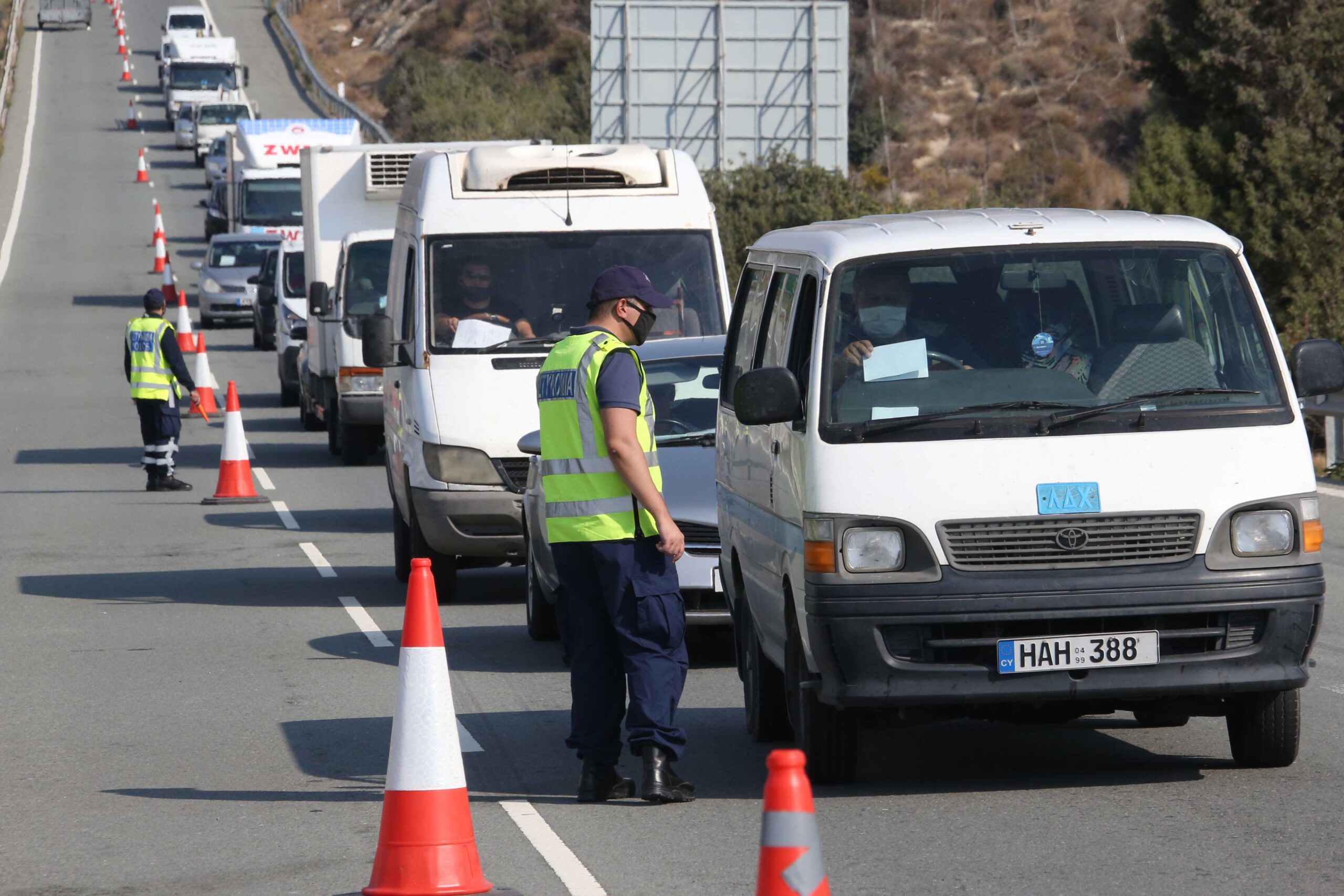 “Due to the terrible handling of the situation, thousands of our fellow citizens are suffering, waiting for hours in queues either outside labs and on the roads,” the party said. “Tests have run out prematurely, apparently because the government has once again miscalculated.”

Diko said it was also unacceptable that the government had issued lockdown decrees and did not even does not even know under what conditions they should be applied. “The situation is critical both in terms of public health and in terms of the effects that restrictive measures have on the economy.”

The health ministry said later on Monday that following the widespread criticism, it wanted to clarify that its sole and primary objective was to protect public health and that the measures were decided in accordance with the recommendations of the European Centre for Disease Control and Prevention (ECDC) and the government’s scientific advisory committee

“The focus of the measures is on minimising contacts with the ultimate goal of limiting and controlling the virus,” it said, adding that “due to the volatile nature of the pandemic, in many cases decisions need to be made under time pressures”.

The ministry said that precisely because of the “extremely dynamic situation”, the individual elements of the strategy are adjusted according to the developments in order to be compatible with the real-time data.

It said the specific decision was taken on Thursday, was implemented within 24 hours and was based on the estimates of competent officials of the ministry but added that although specific estimates were made regarding the number of tests that would be required to be done, during the practical implementation of the procedure, and due to the mass turnout at the sampling point, it became clear that this number had to be increased for the Limassol district “.

The ministry said there were no real issues in other districts.

As of Tuesday there would be a second sampling unit set up in Limassol with eight testing points, the ministry said.

“The ministry of health apologises to the public for the suffering and assures that it remains vigilant so that solutions can be given quickly where and where the gaps are identified,” it concluded.

Sewage ends up in the sea in Paphos