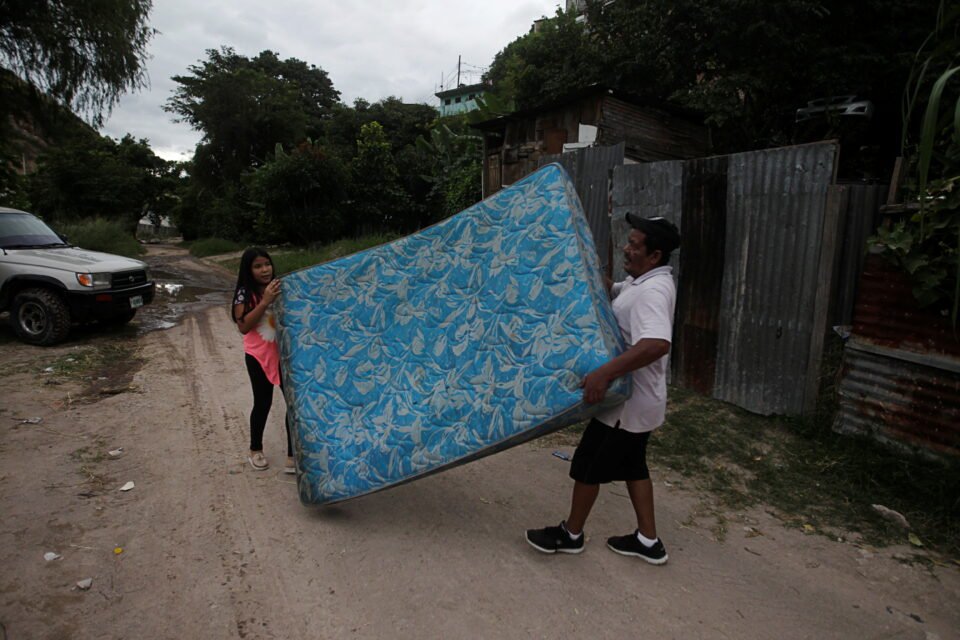 Residents carry a mattress as they evacuate their house in anticipation of heavy rains as Hurricane Iota approaches, in Tegucigalpa, Honduras November 16, 2020. REUTERS/Jorge Cabrera

Hurricane Iota sent zinc roofing flying into the streets, toppled electricity poles and flayed palm trees as its core approached a remote Central American coast on Tuesday, the second giant storm to tear at the area this month.

Iota reached northeastern Nicaragua late on Monday with sustained winds of nearly 155 miles per hour (250 kmh). It is expected to weaken after moving westward into neighboring Honduras, according to the National Hurricane Center (NHC).

Puerto Cabezas, still partly flooded and strewn with debris from the force of Hurricane Eta two weeks ago, again bore the brunt of the storm. Frightened residents huddled in shelters and worried about food and their lives.

“There is nothing to eat at all,” she said, adding that the area’s farms were wrecked by Eta.

The wind tore the roof off a makeshift hospital. Patients were evacuated, including two women who gave birth during the first rains of the storm on Monday, and others in intensive care, Vice-President Rosario Murillo told a news conference.

About 40,000 people in Nicaragua have been evacuated to shelters, authorities said. Many coastal areas are at risk of storm surges of as much as 20 feet (6 meters) above normal tides. In Honduras, 80,000 people were moved to safety.

“It’s the strongest hurricane that has touched Nicaraguan soil since records began,” said Marcio Baca, director of the Nicaraguan Institute of Earth Studies.

This is the first time two major hurricanes have formed in the Atlantic basin in November since records began in 1851.

Iota was also the first category 5 storm of the hurricane season before losing a little wind speed off the coast to reach land as a category 4.

Even after weakening, Iota’s rain – with up to 30 inches (76 cm) expected – could cause landslides and more flooding across the water-logged region, the NHC warned, compounding the damage wrought by Eta across Central America.

“We are in the hands of God. If I have to climb up trees, I’ll do it,” said Jaime Caal Cuz, 53, a farmer in Guatemala’s southeastern province of Izabal. After taking his family to a shelter, he stayed to guard the house and their belongings.

“We don’t have food, but we are going to wait here for the hurricane that we’re asking God to stop from coming,” he said.

Biden: US must work with allies to set rules for global trade