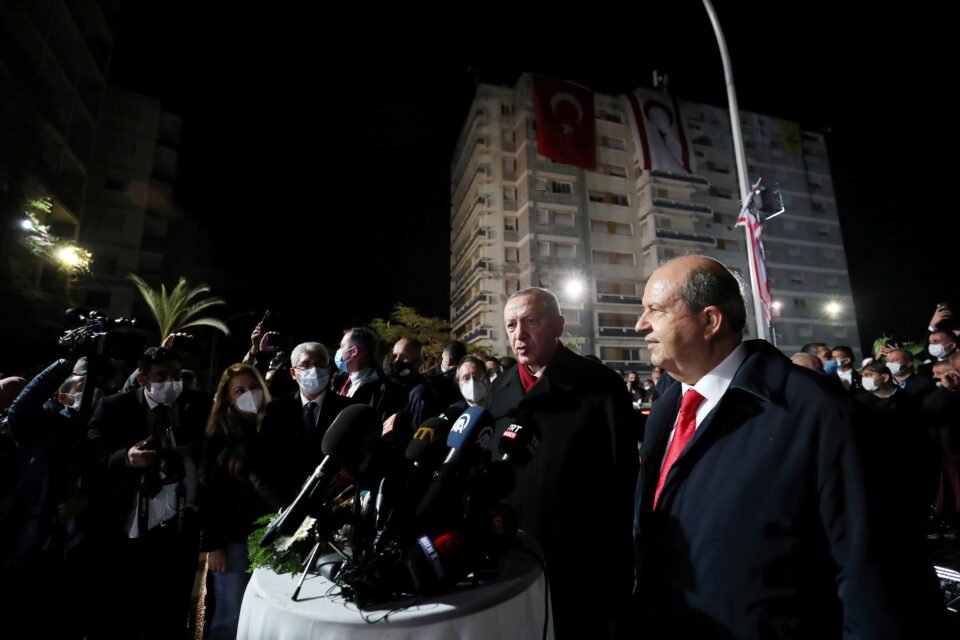 In the end, President Erdogan’s much-trumpeted visit to the north for, among other things, the picnic in Varosha turned out less of an event than had been billed, the rain bringing the picnic to an earlier than planned end. He still attended the military parade to mark the 37th anniversary of the unilateral declaration of independence and opened a recently built mosque.

Greek Cypriots, who were anxiously waiting to hear what Erdogan would say, in the hope of having an indication of what happens next in Varosha, heard nothing new. This does not mean that what they heard was in any way reassuring. On the contrary, the Turkish president repeated the plans to open Varosha for all and told Greek Cypriots to appeal to the immovable property commission over their properties.

His visit was not just about Varosha. It was to mark the anniversary of the establishment of ‘TRNC’, but also to underline, paradoxically, that the occupied area is Turkish territory, a message mainly directed at Turkish Cypriots who have been protesting about the Turkish government’s interference in the elections and the their affairs. Their 83 million Turkish brothers were celebrating with the Turkish Cypriots the anniversary of the establishment of the ‘state,’ he said.

Indirectly, the visit was also a clear message to the Greek Cypriots, who may have chosen to ignore it, in keeping with official policy of the last two decades. We were reminded that the north is Turkish territory in all but name and that the so-called dividing line will at some point become a border without a peacekeeping force to police it. This is what the two-state settlement Turkey and Ersin Tatar have been advocating, and many Greek Cypriots also support, will be about.

A more positive message from the visit was that it did not close the door on a federal settlement that would reunite the country. While we were shown what lies ahead if there is no deal – Varosha would be lost as well – we also heard once again that efforts to reach a federal settlement failed because Greek Cypriot could not accept political equality.

In other words, if the Cyprus government was prepared to accept a federation based on political equality, a bizonal bicommunal federation would still be on the table. Of course, it would have to convince the Turkish side that it fully supports political equality, something that might not be as easy as it sounds given the position expressed on the matter by President Anastasiades in the last couple of years.

There is still a choice between reunification or two-states, and although the former might be much more difficult to achieve today than three years ago it is not off the table, assuming Anastasiades can show commitment to it.

Coronavirus: Praying for a Christmas miracle