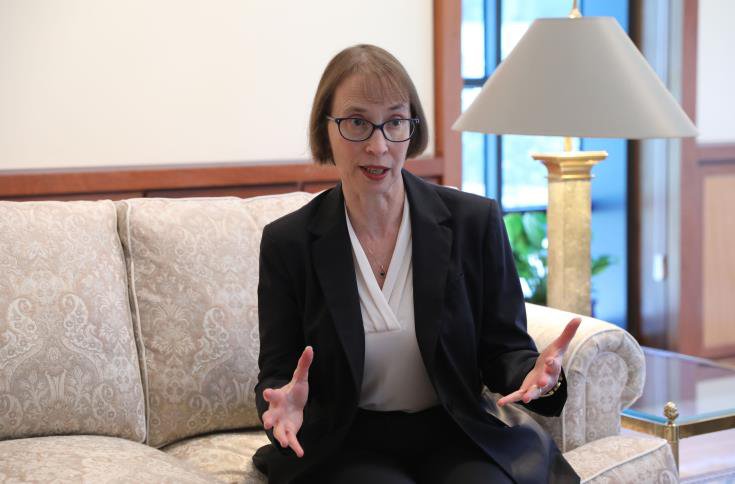 UN Security Council resolutions on Famagusta must be respected, US ambassador Judith Garber said on Tuesday while reaffirming that Washington supports the right of the Republic of Cyprus to exploit its natural resources.

According to a House of Representatives announcement, Garber who was received by House President Adamos Adamou, also underlined that the positions of the US are clear, both as regards the Cyprus problem and the Turkish activities in Cyprus` Exclusive Economic Zone (EEZ).

Moreover, she underlined the US’ firm position of principles in favour of a comprehensive settlement for the reunification of Cyprus, on the basis of a bizonal, bicommunal federation, that will be beneficial for all Cypriots, and also for peace and stability in the broader region.

On his part, Adamou thanked Garber for the support which the US offers Cyprus, particularly in light of the worrying, as he noted, developments with regard to the illegal activities of Turkey against the Republic of Cyprus and more generally.

Adamou denounced the escalating Turkish provocations and pro-division positions expressed by the Turkish side as regards the Cyprus problem, making special reference to the opening of part of the fenced off city of Famagusta, in violation of the relevant UN Security Council resolutions.

Moreover, he condemned the ongoing illegal Turkish operations in Cyprus’ EEZ and Turkey`s destabilizing role in the broader region of the Eastern Mediterranean and beyond that.

According to the press release, the two sides also noted the upgrading of the relations and cooperation between the US and Cyprus in various fields and levels, with the US Ambassador underlining that these relations have never before been more strong.

Cyprus has been divided since 1974, when Turkey invaded and occupied its northern third. The latest UN backed round of talks took place in the Swiss resort of Crans Montana but failed to yield any results.

The European Council reaffirmed its full solidarity with Cyprus, regarding the respect of its sovereignty and sovereign rights in accordance with international law and in February 2020, placed two persons under restrictive measures, in relation to Turkey`s unauthorised drilling activities in the Eastern Mediterranean.

The Turkish side illegally opened on October 8 part of the beach of the abandoned town of Famagusta, in violation to numerous UN resolutions.