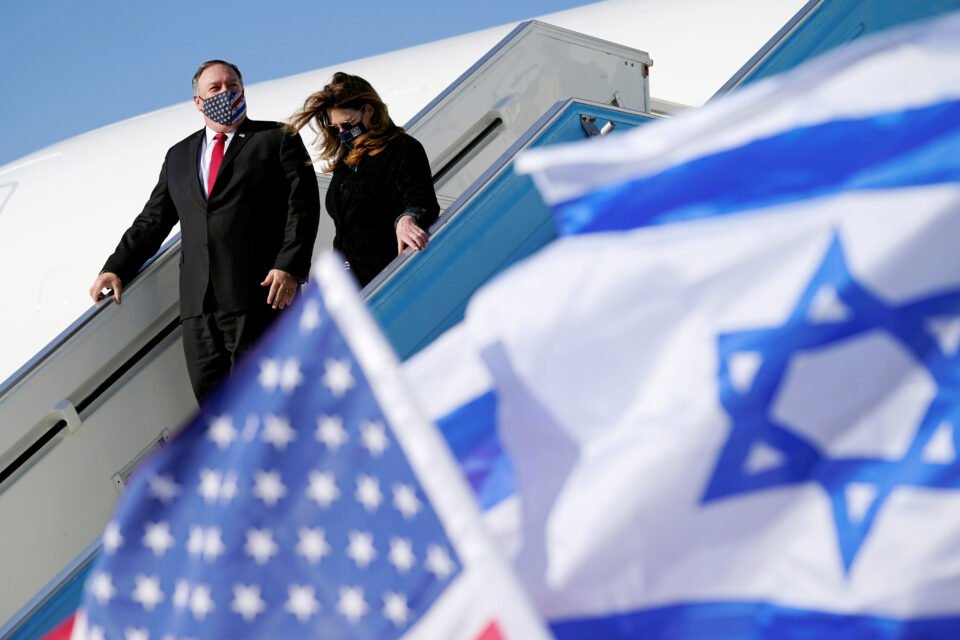 Mike Pompeo on Thursday became the first U.S. secretary of state to visit an Israeli West Bank settlement and the Golan Heights, in a show of solidarity that led Palestinians to accuse him of helping to cement Israeli control over occupied territory.

Pompeo’s trips came during the Israeli leg of what may be his last tour of the Middle East in the final months of President Donald Trump’s administration.

Trump delighted Israel in 2019 by recognising Israel’s claim to sovereignty over the area of the Golan Heights that it captured from Syria in a 1967 war and later annexed, in a move that was not recognised by most of the international community.

Last year, Pompeo, an evangelical Christian, broke with decades of U.S. foreign policy to announce that the United States under Trump no longer viewed Israel’s settlements in the West Bank as “inconsistent with international law”.

These and other decisions were greeted with dismay by the Palestinians, who boycotted the Trump White House for nearly three years, accusing it of consistent pro-Israel bias.

The Palestinians have indicated they would resume relations as normal with Washington once President-elect Joe Biden takes office, widely seen as a gesture of goodwill towards his future administration.

However it is unclear how many of Trump’s decisions will be reversed by a Biden administration.

On Thursday morning Pompeo appeared alongside Israeli Prime Minister Benjamin Netanyahu, who said both Pompeo and Trump were long-standing friends of Israel.

Pompeo said the two leaders discussed Iran, the perceived threat of which has shifted political fault lines in the region, uniting Israel and Gulf Arab states in fear of Tehran.

He also issued guidelines for Israeli products made in settlements to be labelled “Made in Israel” or “Product of Israel” when exported to the United States, removing the distinction between goods made within Israel and those produced in occupied territory.

But first Pompeo travelled the short distance from Jerusalem to the Israeli-occupied West Bank – known to most Israelis as Judea and Samaria – where more than 440,000 Jewish settlers live uneasily among three million Palestinians, mostly in fortified hilltop settlements.

He dined at Shaar Binyamin, an Israeli industrial zone just north of Jerusalem where Psagot winery – taking its name from a nearby settlement – has a blend named after him.

“Enjoyed lunch at the scenic Psagot Winery today. Unfortunately, Psagot and other businesses have been targeted by pernicious EU (European Union) labeling efforts that facilitate the boycott of Israeli companies. The U.S. stands with Israel and will not tolerate any form of delegitimization,” Pompeo wrote on Twitter.

Under EU guidelines farm and other products made in Israeli settlements and exported to EU member countries should be clearly labeled as coming from the settlements, which the bloc considers illegal under international law.

Pompeo’s visit departed from past policy that had kept top U.S. officials away from settlements, which Palestinians view as obstacles to a viable future state.

Palestinians in the area say that the Psagot winery was built in part on Palestinian land near the cities of Ramallah and Al-Bireh.

“I am a U.S. citizen, a taxpayer, educated, loyal, ok? Why do these settlers have more rights than I do?”

“I very much wanted to come here on this trip to tell the world that we have it right. That we, the United States has it right. That Israel has it right,” Pompeo said from a hilltop looking into an area of the Syrian Golan that was until recently controlled by militias fighting the Syrian civil war.

“Each nation has the right to defend itself in its own sovereignty,” he said.

Such signs of support left many Israelis backing Trump’s bid for re-election.

But Palestinian negotiator Hanan Ashrawi accused Pompeo of using Trump’s final weeks in office “to set yet another illegal precedent, violate international law and perhaps to advance his own future political ambitions”.