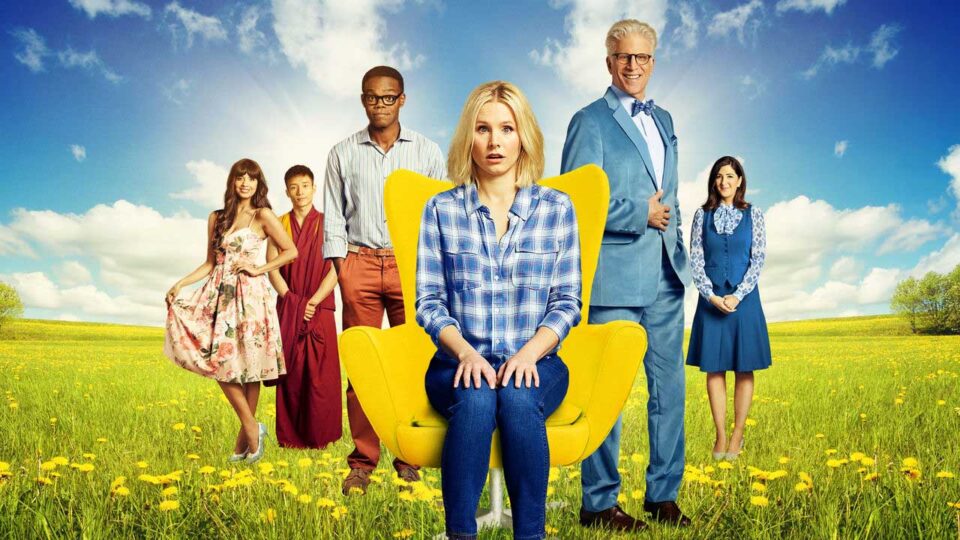 You’re dead. But relax, everything is fine. This is heaven – a.k.a ‘The Good Place’ – and your exemplary life, although now over, means you deserve to be here.

So begins The Good Place, a thought-provoking romp around the afterlife, masquerading as escapist fantasy. Kristin Bell (as protagonist Eleanor Shellstrop, a deceased human rights lawyer) is the star of the show, who awakens post-death to find herself in an idyllic village community peopled by ex-monks, deceased eco-warriors, and former philanthropists.

Everything does, indeed, seem fine. Except for this: Eleanor knows only too well that, during her life on Earth, she was not a good person. She certainly wasn’t a human rights lawyer who saved millions of lives in the Ukraine. In fact, she was a self-styled ‘Arizona trashbag’ with a penchant for shirking her responsibilities, mocking her friends and defrauding the elderly. A Mistake, she realises, Has Been Made.

But when there’s a corresponding Bad Place (where zany tortures include bees up the nose, butthole spiders, and penis flatteners) why admit the truth; if you just keep playing along, surely it will all work out? And in the meantime, there’s a whole new existence to explore, complete with hand-picked soulmate (ethics professor Chidi Anagonye, played by William Jackson Harper), ever-obliging AI (actress D’Arcy Carden as a sort of ultimate flight attendant/nanny) and more flavours of frozen yoghurt than one person could get through in an after-lifetime.

Besides, you wouldn’t want to disappoint the angel of an architect (Ted Danson, in fine form as the creator of the community) would you? He may be delightfully dithery and just a tad odd, but he’s been waiting four billion years to design his first Good Place. Why mess up his dream?

On the surface, this is a gem of a sitcom. Dig a little deeper, and it’s a treasure chest of sparkling wit and wisdom: family entertainment for the intelligent. All four seasons move along at a brisk pace, with just the right amount of wacky happenings and wild plot twists to keep us guessing as to what’s really going on…

Taking control of the right to choose