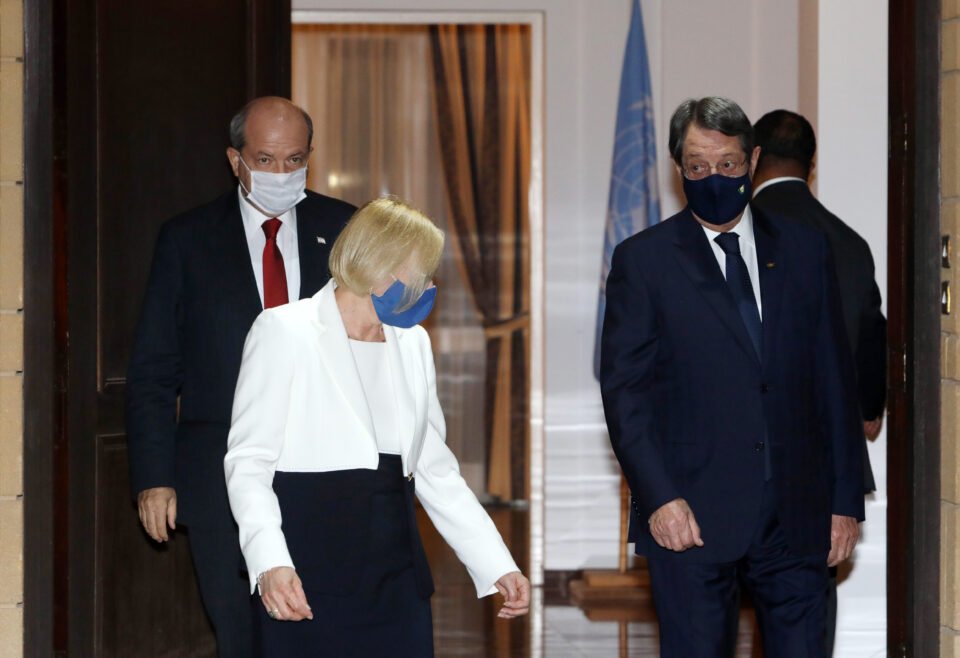 One of the basic reasons that has led the Cyprus problem into the deadlock that we are currently experiencing is the inclination of the Greek Cypriot leadership to seek comparative advantages over “the other side”, by proposing supposedly ‘smart’ ideas, such as the shift from a tightly-knit, to as loose as federation as possible.

The thinking behind this shift, which has raised legitimate concerns not only on ‘the other side’ but also among the international community, as to whether we are genuinely committed to finding a solution to the Cyprus problem, was the misleading argument that has been systematically projected by the president that “the less we have to share in terms of decision making, the fewer will be the conflicts”.

Of course, the logical extension of this thinking is the two-state solution and, conceivably, this is what has led Turkey into posing the dilemma: ‘make up your minds: cohabitation or divorce?’ and has led pro-Turkish Britain into suggesting that the gap between a loose federation and a two-state arrangement could easily be breached.

Given the stated intention of the parties involved in the process to resume Cyprus talks, which, we hope, will materialise despite the problems and the difficulties encountered, now is the time to embark on a serious discussion as to what kind of a federation we want to have.  What kind of a federation has the best chance of functioning smoothly?

It is a fact that in the world we live in, there are no two identical federations.  This makes perfect sense because the successful federations i.e. those which have survived the test of time, are those which were able to successfully adapt to the specific circumstances and needs of each individual country organised on a federated basis.

What are the peculiarities of Cyprus?  Cyprus is a very small country, both in terms of land space and in terms of population.  The principal languages spoken are Greek, Turkish and English.  Cyprus has two “motherlands”, Greece and Turkey, which, in different ways, have been involved in the past and will probably seek to get involved in the future in the internal affairs of Cyprus.

Thus, while in the case of Greece the doctrine generally followed in the past was: ‘Cyprus decides and Greece follows’, this resulted in Greek involvement being limited to the negotiation of the Zurich and London agreements and the junta coup d’état of July 1974, Turkey’s involvement has been ongoing. It was aimed at establishing a presence in Cyprus and at the military and economic protection of the Turkish Cypriot community, which culminated in the 1974 Turkish invasion.

For any federal arrangement to succeed and flourish in Cyprus, it is absolutely necessary to secure the political independence of Cyprus from any interference by the “motherlands”, which must confine their relationship to their cultural and social links with the two majority communities in Cyprus and to the development of healthy economic links with the whole of the island.  Otherwise, we are very likely to see a revival of the confrontational attitude and of the confrontational climate of the past.

The only way to secure the non-involvement of Greece and Turkey in the internal political affairs of Cyprus is by affording to both communities – by recognising their political equality – the opportunity to protect their vital interests, without the need to resort to the help of the ‘motherlands’.

These conditions can only be secured within the framework of a tightly-knit federation where the Greek Cypriot and the Turkish Cypriot communities would be able to prevent each other from taking and implementing decisions that could negatively impact vital interests of the other.  This is equally important for both communities and it is a condition that can be easily attained through the need to secure the one positive vote on the part of the Turkish Cypriot community.

You may say what are we going to do, if the Turkish Cypriot community yields to the temptation to misuse the one-positive vote mechanism for the purposes of extracting “unreasonable” advantages at the expense of the Greek Cypriot community?  The answer to this question is simple.  In such a case, there should be a conflict-resolution mechanism that would be automatically activated.

Such a mechanism already exists in the form of the European Court of Justice (ECJ), which, in fact, would hear urgent cases of an alleged violation of the European acquis, on a priority basis.  In any event, if the existing mechanisms are not deemed adequate, they could easily be reinforced so as to dispel such concerns.

In contrast, the logic of the loose, or decentralised federation is reminiscent of the song of the sirens. The argument advanced in support of a loose federation is that the fewer the issues on which agreement is necessary, the less conflict and friction and, therefore, the better.  On the face of it, the argument sounds valid but, if more carefully examined, it turns out to be hollow and unsubstantiated for the following reason.

The disagreement and the conflict are unlikely to arise in connection with issues of secondary importance.  It follows that as the field of subjects not requiring the consent of the one positive vote of the Turkish Cypriot community expands and, as a consequence, the constituent state has the authority to decide on its own, the higher the risk of Turkey – whose interests are not identical with those of Cyprus – interfering with political decisions in one of the constituent states.

In other words, a loose federation will lead, in practise, to the alienation of the right of the majority to block decisions that will have catastrophic consequences for the whole of Cyprus.  Confronted with such a risk, I would not hesitate for a second, to accept a temporary inability to take a decision on a matter of secondary importance, particularly since on matters of vital importance the risk of conflict will still be there – the securing of the one positive vote will still be necessary.

How, then, is the apparent preference of certain politicians for a loose federation justified?  The answer to this question is very simple.  In matters of corruption, collusion, rusfeti (rüşvet) and under-the-table dealings, a loose federation is a more convenient set up in that the one side does not interfere in the affairs of the other side and does not serve as a barrier to corruption.

Is it a coincidence that (with the exception of the working hours of barber shops and hairdressers) not a single specific example has been cited, as yet, of a competence, which, if referred to the constituent states, would contribute to the avoidance of conflict between the two communities?