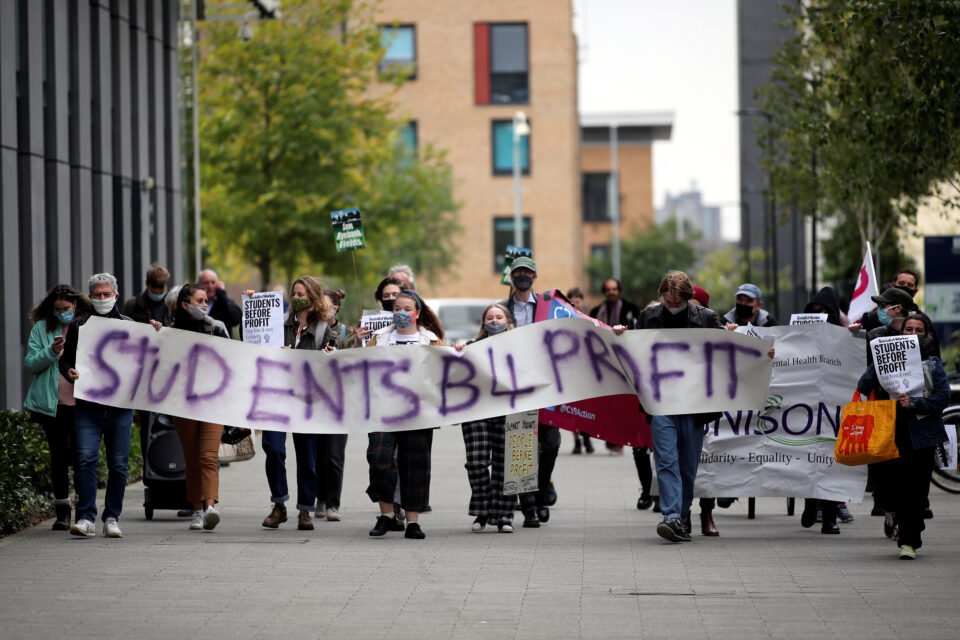 Students hold a placard as they protest outside Birley Halls at Manchester Metropolitan University, in Manchester, Britain, October 2, 2020. REUTERS/Molly Darlington

Cypriot students on a challenging term back at university

British universities have enjoyed their fair share of front-page news articles since the start of the pandemic, recently dubbed the ‘care homes of the second wave’ by the Guardian.

While a plethora of businesses and industries have been ravaged by the economic and health impacts brought on by the coronavirus, the decision of UK universities back in September to welcome and encourage students back to campus was widely criticised as a clear and dangerous prioritisation of economy over health, and has had a direct impact on thousands of Cypriots studying there.

Over summer, universities seemed unsure of what the teaching format would be if and when we returned to campus. Soon the term ‘hybrid-learning’ started to emerge. This entailed a mixture of face-to-face teaching and online materials that the universities assured everyone would be safe.

Even so, the decision to head back for many students was not an easy one. In spring, the pandemic caught us by surprise. This time, we were well aware of the dangers, and the decision to head back while the promise of a difficult winter lingered on the horizon was questionable at best. Were we heading back to a safe environment as assured, or was this a greedy and short-sighted scheme to secure rent and fees before the situation inevitably worsened?

To try and understand why the universities chose to do this, I spoke to Christos Tassis, a senior graduate teaching assistant at the University of Warwick.

“First and most obvious, in the case of students who would take a year out or simply not attend (a real risk if everything moved online) the economic blow of not collecting tuition fees would be enormous,” he said.

“Also, the lost rent for all the on and off campus accommodation would be crippling, not only to the university but to the small nearby towns whose economies predominantly rely on the student population.”

Tassis admitted that money is a big policy-driver, and while putting finances over health is generally frowned upon, calculated risks are being taken in every sector of the economy, so why not universities?

“‘A healthy academic environment was also a consideration,” he said. “It is widely acknowledged that students tend to learn more and get a more holistic academic experience when they are surrounded by their peers.”

But he added that students also simply wanted to go back.

“For modules that offer both online and face-to-face seminar slots, we have seen large numbers choose the latter option. If we can take the necessary precautions to provide a Covid-safe environment, why not enjoy a near-full learning experience?”

He is right. I would be lying if I said I felt at risk of contracting Covid in a dispersed classroom in which everyone has vigorously disinfected their table and is constantly wearing a mask. The issue is outside the classroom.

Romanos Papaioannou, a first year law student at the University of Manchester, told a harrowing story. At 3am one night in early October, he and all the other students in his 200-room accommodation block were woken and evacuated by a fire alarm. Rushing outside, they left in pyjamas, unaware of the burst pipe which had caused a flood in the building. With the problem not quickly fixable, the university offered the students alternative accommodation for the night.

“They told us we could go to Fallowfield halls. At the time this accommodation had become such an acute hotspot for the virus that it had actually been in national news. We declined.”

The university decided to try and fix the issue of flooding by the morning, and moved Papaioannou and the rest of the displaced students to a study hall until 10am.

“We had no food, no water and everyone was sleeping next to each other on the floor. Five days later, myself and the majority of my friends started developing systems. We decided to get tested. Everyone in my building was positive. I never stood a chance.”

An instance of how operating through the pandemic leaves little to no margin for error. So why did so many of us travel to university if we knew what the risks were? Alongside the fact that universities, in some cases, stringently vetted applications to work remotely, resulting in a number of people being told that their reasoning was not serious enough to merit staying at home, many students actually wanted to go.

Paying annual fees of £9,750 and attending university for just three short years, students, myself included, felt the need to return to campus to try and get the most out of this short and unique period of our lives. Couple the spring lockdown of last year with the series of teacher union strikes over the past three years and many students have already missed out on a concerning percentage of their degree. They cannot be criticised for wanting to get their money’s worth.

For those entering their first year, the issue was even more pressing. From next year, students from Cyprus, like the rest of the EU, will have to pay international fees to go to the UK which are least double the present £9,750 a year. Deferring their entry was not an option.

Despite the efforts to contain the virus, the decision to bring students back quite quickly seemed erroneous. Chloe Christodoulou, a final year journalism student at Sheffield was one of the many students who tested positive right at the start, and was disappointed with the university’s response.

“There was only one person from my department who emailed me and supported me. I told one of my lecturers I was self-isolating so had to catch up with work and he blatantly told me he couldn’t repeat live/face to face lectures online.”

So why did it spread like this when we all wore masks in class? Constantinos Iacovides, a second year psychology student at the University of Bristol told me that the spread was likely due to partying and general student conduct.

“People keep going out, public areas are often overcrowded (especially on weekends) and everyone seems to be taking the situation lightly,” he said.

To bring thousands of young people together, restrict their social movements and expect them to be fully responsible when the virus poses little to no fatal risk to them was undoubtedly misguided, and the case count at many universities has emphatically reflected this.

Coming home for Christmas is set to be equally messy. The British government, who previously told us we should not go home when lockdown was imposed, have outlined a window from December 2 to 9 in which we are to head home. The logic is that, after a month of lockdown ending on December 2, we will pose no Covid risk to our parents and families. Not only have they failed to recognise that a worrying percentage of students are not abiding by the lockdown regulations and therefore could pose a transmission risk to their families, but this window disregards the fact that most end of term tests and assignments are due in and around these dates, making the window an academically disruptive time to travel.

With widespread deployment of a vaccine still months away at best, we can only hope that lessons are learned for the start of the spring term in January.

Lute expected in Cyprus between November 30 and December 2