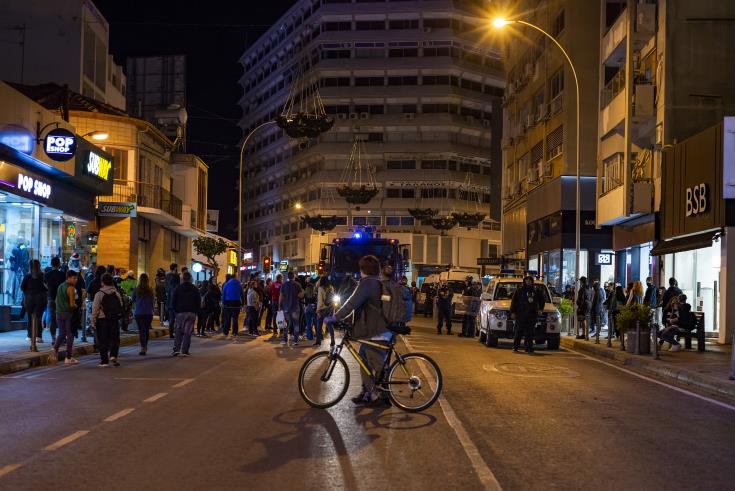 Limassol police broke up an anti-lockdown protest on Anexartisias Street on Saturday evening before it got underway, they said.

Dozens of officers with anti-riot equipment gathered after receiving information that a demonstration would be taking place outside the district administration offices.

At around 6pm, a few dozen protesters began to show up who were instructed by police to leave the area.

Police remained in the area until the 8pm curfew but continued patrols by helicopter over the city.

In a statement early Sunday police said they had learned of the planned protest from social media, a new tactic they announced during the week – scouring the internet for dissenters.

They said they came across a post urging people to gather en masse at 5pm on Saturday at various locations in the city, and in other districts.

The posts had been made by a 41-year-old woman who was arrested in Paphos around 3.30pm Saturday afternoon and charged with incitement to commit a criminal offence, violation of the infectious diseases act and negligence in spreading a life-threatening disease. She was released around 7pm and will appear in court at a later date.

Also in Paphos, around 5.30pm during a patrol, officers approached people in the town-hall square and cautioned them as to the restrictions.

One young man at the gathering, they said, started shouting and insulting the police and was arrested for causing a public disturbance. At this point , a second youth in the same place did the same. He was also arrested. The two, aged 20 and 23, were charged and released.

Two other people were arrested during the Limassol protest gathering, a 23-year-old for throwing a firecracker, and later a 54-year-old man for shouting insults at police. The man had managed to evade officers after the incident but they later tracked him down and arrested him.

Over the past 24 hours, 51 individuals and three businesses were booked for violating Covid restrictions out of 2,686 police checks.

Lebanon central bank to be audited despite ‘interest-driven roadblocks’