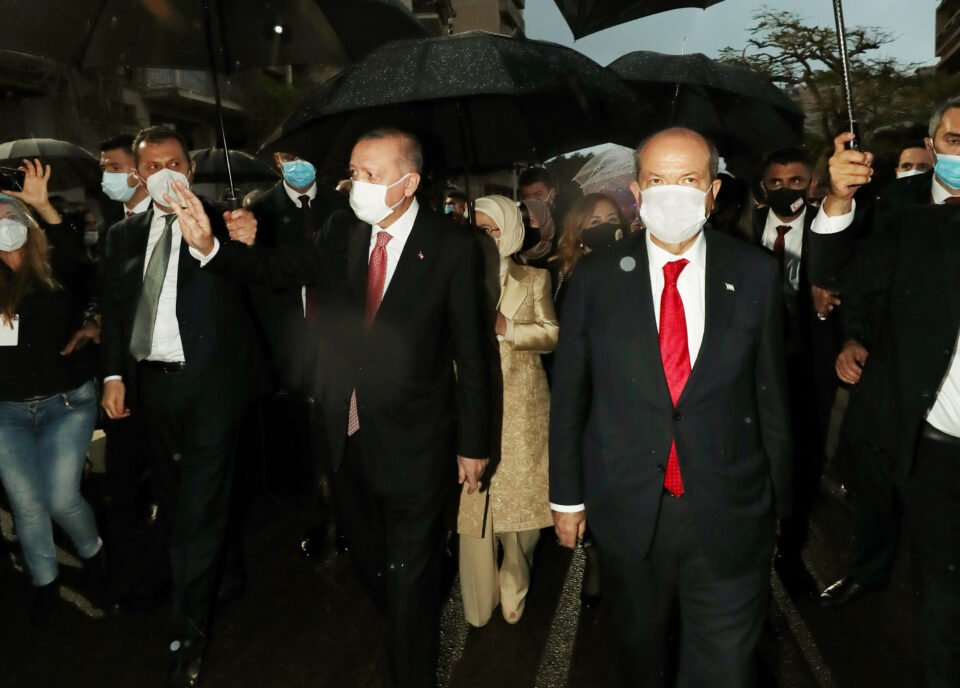 President Tayyip Erdogan and Turkish Cypriot leader Ersin Tatar visit the fenced-off by the Turkish military Varosha, a suburb of the town of Famagusta.

Turkish President Recep Tayyip Erdogan’s picnic at Varosha last Sunday was a bit of a damp squib. It served no purpose other than to add insult to injury to its Greek Cypriot inhabitants that was unbecoming a president and head of state.

The visit of US Secretary of State, Mike Pompeo, to Israeli settlements in occupied Palestinian land was of a piece with Erdogan’s visit to Varosha and should be deprecated for the same reasons.

They both set a bad precedent in the conduct of foreign policy. Illegally occupied lands are no go areas for leaders and high-ranking officials of states as important as the US and Turkey.

Erdogan was visiting northern Cyprus to celebrate the unilateral declaration of independence (UDI) of the ‘Turkish Republic of Northern Cyprus’ (‘TRNC’) on November 15, 1983. But as every international lawyer knows, such unilateral declarations do not go down well with other states. They tend to destabilise the territorial integrity of states, which is why aside from colonial secession, very few breakaway states have been accorded recognition by the international community at the UN.

In the case of the ‘TRNC’ the UN Security Council passed a resolution against secession from the Republic of Cyprus (RoC). The resolution branded the ‘TRNC’ UDI illegal and invalid and called on other states not just to withhold recognition and assistance to the ‘TRNC’ but to respect the sovereignty and territorial integrity and unity of RoC.

As for Varosha the UN Security Council ruled that the settlement by people other than its inhabitants was inadmissible and called for the transfer of that area to the administration of the United Nations.

As if that were not enough the International Court of Justice (ICJ) in an Advisory Opinion of July 2010 on whether the UDI in respect of Kosovo was in accordance with international law opined that although UDI was not unlawful per se, it was unlawful in the case of northern Cyprus.

Paraphrasing from the Advisory Opinion the ICJ reasoned that the illegality in Cyprus stems not from the unilateral character of the ‘TRNC’s’ action, but from the unlawful use of force or other egregious violations of general international law of a peremptory character.

So for all practical purposes the international community and international law are dead against breakaway states that seek to go it alone without the consent of the metropolitan state.

Many Turkish Cypriots believe international law is unfair to them as they have been isolated and embargoed when in fact they are are the underdog in Cyprus.

The trouble is that international law is about relations between states leaving it to internal constitutional law to regulate disputes between communities.

That said, international law recognises the right to self-determination of peoples that could be engaged provided third states are not involved, which is why it was held that UDI in and of itself is not contrary to international law.

For example, Catalonia declared UDI without the consent of metropolitan Spain in Madrid and remained part of Spain. No other countries were involved. The EU did not recognise Catalonia as separate from Spain and the UDI had no legal consequences internationally but it was not contrary to international law. The same would happen in Scotland if she declares UDI without the agreement of the UK government at Westminster.

The secession of all the former Soviet Republics and the Baltic states was done with the consent of the Soviet Union, whereas in Yugoslavia the metropolitan state of Yugoslavia itself imploded so there was not metropolitan entity from which to secede.

Other examples such as Biafra, Kashmir, Tamil Elam, Kurdistan, Chechnya, Akbazia, South Ossetia and Nagorno-Karabakh all failed to get international recognition.

So it is important for the Turkish Cypriots to understand and appreciate that a two-state solution requires the agreement of the RoC, and most Turkish Cypriots do not need me to tell them that such agreement is just not going to be forthcoming ever – period.

Turks in Turkey may have misunderstood rhetoric from Greek Cypriot politicians and took it as fact that they too prefer a two-state solution, but nothing could be further from the truth – no Greek Cypriot leader can survive one day in power if he so much as thinks about a two state solution.

So I am afraid the Cypriot leaders will have to try again and see whether they can sacrifice a few sacred cows and reach agreement on some sort of federal arrangement.

The first sacred cow ready for the cull is this ridiculous business that “nothing is agreed until everything is agreed.” It is all very well in negotiations between parties keen to compromise, but not when parties think compromise an anathema.

As I see it Varosha should have been returned to its Greek Cypriot residents years ago. The Greek Cypriot-run foreign ministry of the RoC is paranoid about allowing formal dealings with the TRNC, which has pushed the Turkish Cypriots into ever greater dependence on Turkey. That sacred cow has to go as it is counter-productive with no upside to speak of other than to foment bitterness and distrust.

Most Greek Cypriots can live with pockets of recognition here and there like the opening of Tymbou (Ercan) airport and Famagusta harbour, if Varosha were returned to its residents in exchange.

The other two scared cows are sides of the same coin. The idea that the Turkish Cypriots are a minority only entitled to minority status ignores the realities of the Cyprus problem. Put another way: if that were true the Cyprus problem would not exist like it does not exist with the Maronites and the Armenians.

It is true that the Turkish Cypriots are in the minority but they are too significant politically to be relegated to the status of a minority.

The other side of that coin is the Turkish Cypriot obsession with and misunderstanding of political equality. It derives from the days when the Turkish Cypriots were accorded a privileged position under the 1960 independence arrangements. That was done primarily to ensure they had the power to block enosis – union with Greece.

All the Turkish Cypriot really need nowadays when enosis is off the agenda is a federal arrangement in which there is political equality between two states that is reasonable and proportionate.

Like the US, Cyprus could have a House of Representatives that is proportionate to the population of the constituent states, and an Upper House with equal representation between them, with powers distributed and adjusted with checks and balances to ensure a smooth functioning apparatus even when the states are in disharmony, and an American style Electoral College to elect the president rather than a rotating presidency.

Most people prefer less rather than more government, and closer and more accountable governance rather than one that is distant and less accountable.

A settlement is not an exercise in providing jobs for the boys be they Greek or Turkish Cypriot. Small, honest, accountable government is what people really care about; the ethnicity of the president is just a sacred cow of little practical importance to the average Cypriot.

First visit but we’re not impressed