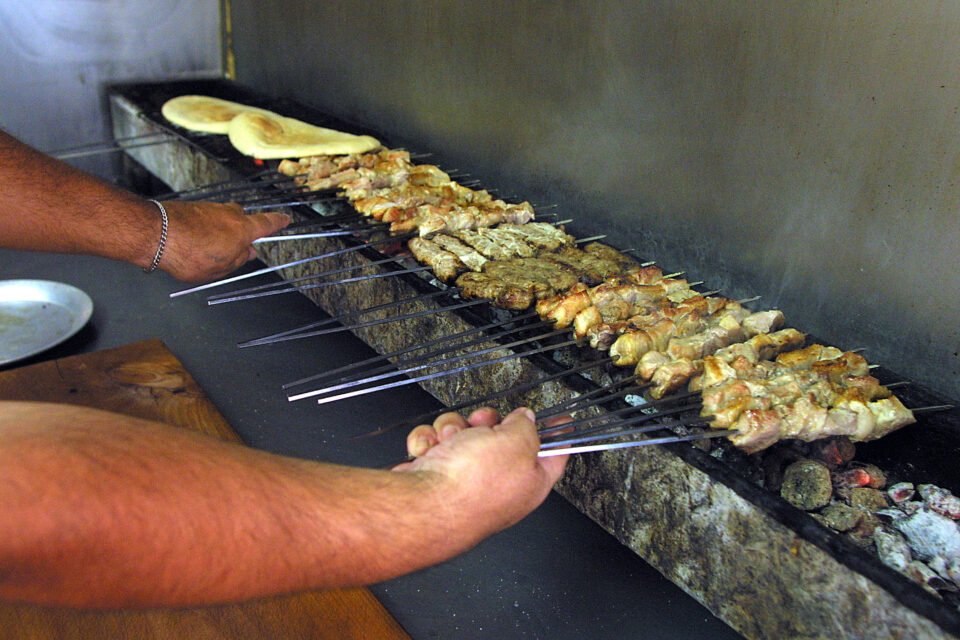 THE TINY probability of Kyproulla experiencing a shortage of pork for a few days spurred the government into emergency action, Prez Nik shunning the idea of his subjects having nightmares of visiting the butcher and not finding any pork chops to buy or kebab shop owners reducing the minced pork content in their sheftalia.

You can take away the right of a Cypriot to drive to Limassol, you can force him to lock himself in his house at 8pm, you can make him wear a face mask in his bed but do not take away his meat-eating right for a day because unrest and violence would spread faster than the coronavirus and no face mask will protect you.

As soon as the owner of Cypra slaughterhouse announced he would be closing down his abattoir and the first murmurs of discontent were heard, butchers declaring on radio there would be big meat shortages Nik stepped in to allay the fears of all carnivores. He set up a ministerial committee made up of four ministers to deal with the matter.

Having four ministers dealing with a slaughterhouse to avert a possible shortage of pork (big quantities of beef and lamb are imported) seems a bit excessive even for a country notorious for its complete lack of perspective.

THE HEAD of the veterinary services, Christodoulos Pipis, told Tass news agency that the ministerial committee had been asked “to evaluate the situation and secure the way in which the slaughterhouses will carry on operating smoothly and cover the needs of the public in meat.”

The committee was to meet soon to explore “what means were available to the state to ensure the continuation of the smooth operation of the slaughterhouses. It would also look at the possibility of requisitioning the slaughterhouse, said Pipis. Nik’s government seems to determined to do anything to avert a pork crisis in our society.

Before anyone starts thinking I am a vegetarian, a vegan or a pescatarian I would like to state categorically that I am as much of a carnivore as the next Cypriot and I love my pitta mixed. But in contrast to our prez I do not think a meat shortage for a few days justifies four ministers being put in charge of a slaughterhouse and considering requisitioning it as we were in a war-time situation.

THE DRASTIC action may have had something to do with fears that the owner of Cypra, Giorgos Georgiou had decided to close down his slaughterhouse in order to have more negotiating power in his dealings with the government.

The guy had built premises without permits, had been served with demolition orders which he ignored, was demanding the issuance of permits via cabinet decision and was charged for using undeclared labour. The fact that his slaughterhouse has monopolistic power (there is one more slaughterhouse that is much smaller) put him in a very strong position in dealing with the government that does not want the supply of fresh meat affected. You would not expect his wife, the state treasurer to put in a good word for him with the government, because that would be conflict of interest and as Rea Georgiou said in a statement on Friday, she was a squeaky-clean official who would never do such a thing.

NEWSPAPER claims there was a case of conflict of interest because Mrs Georgiou was president of some ineffective supervising authority for accountants and her brother was an accountant was a bit weak, considering the authority supervised auditing firms that had dealings with the state. A much stronger case of conflict of interest, was highlighted in Alithia on Friday, referring to events that took place in 2015. Then interior minister Socratis Hasikos was trying to rent the Kofinou slaughterhouse which had closed down. Auditor-general Odysseas had written to Hasikos telling him to stop procedures for renting it and called a meeting to discuss the matter.

During the meeting at which, apart from Odysseas, there was representative of the state treasurer. The representative of the interior ministry informed participants that Hasikos had secured a court decision allowing the renting of Kofinou. Within a few hours an injunction was issued by the court preventing the state from renting Kofinou. Who tipped off Mr Georgiou in order to secure an injunction just a few hours after the meeting? Was it the auditor-general or the accountant-general? 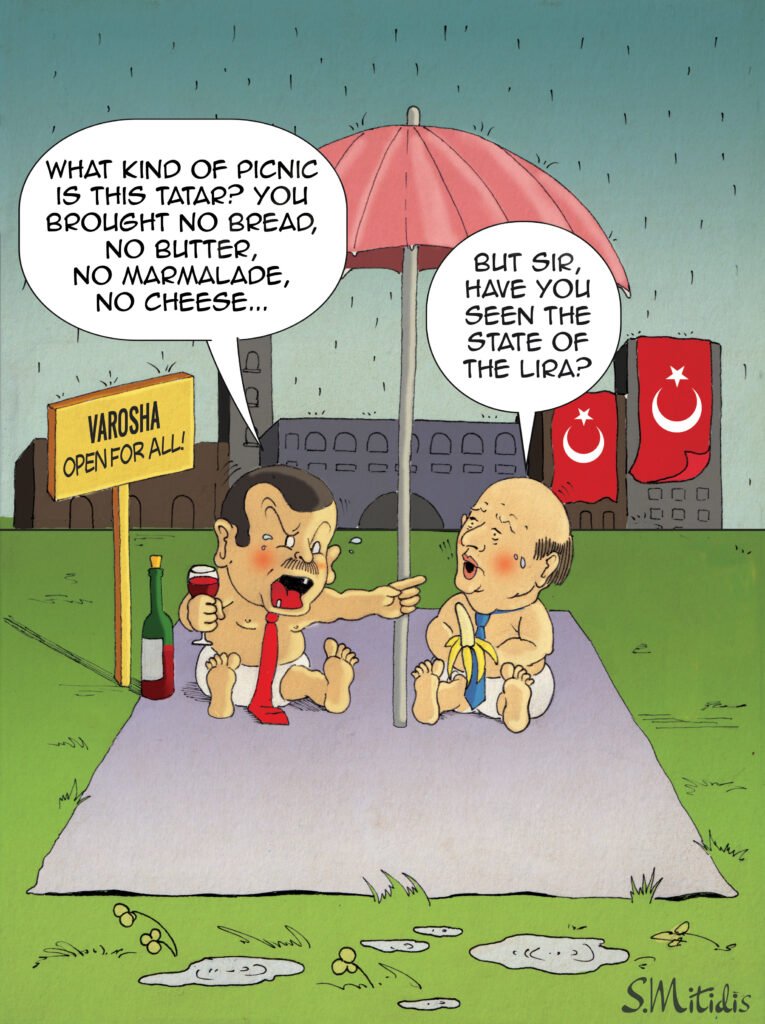 ALLAH answered our prayers last Sunday and it was pissing it down when Erdogan went for his much-trumpeted picnic at Varosha, but his visit still managed to piss off people on both sides of the dividing line. What was impressive was he held his umbrella himself and did not have some flunkey to do it for him.

It was impressive that Turkish Cypriots carried out a protest against the visit in north Nicosia. I am informed there is despair among the TCs because they are fast realizing that Ersin Tatar has a very different agenda to his predecessor. Members of technical committees are being told that they either toe the Tatar line or take a walk.

The TC member of the committee of missing persons, Gulden Kucuk, did exactly that after being informed that her contract would not be renewed. Then again, she had been in the post for 14 years and her time to take a walk had come.

THE GOOD news is that a lack of developments in the Cyprob is imminent. The UNSG’s envoy Jane Holl Lute has started consultations “in order to create the conditions to prepare for a new meeting of the so-called 5+1, the 1 being the UN,” said the UNSG on Friday. Lute’s involvement is a guarantee of things leading nowhere. Her record in this respect is impeccable. One person in the know suggested that the UNSG is using Lute as a delaying tactic, intent on waiting for Joe Biden to take over as US President before calling the 5+1 conference.

WE WERE honoured to receive a letter from Dr Christos Clerides, just a few weeks after he was elected President of the Cyprus Bar Association, even though it was not a friendly letter, expressing any kind of admiration for our establishment or the like.

On the contrary, it was a formal letter addressed to the editor of the Cyprus Mail and written on behalf of his client Ms Philippa Karsera, who was not pleased with what the Coffeeshop had written about her being made head of the General Secretariat of European Affairs at the foreign ministry of which her husband is in charge.

It was never the Coffeeshop’s intention to cause any offence to Mrs Karsera, towards whom the newspaper has very positive feelings, but were merely reporting on an issue we thought was of public interest and news value. People surely have the right to know who the people holding top posts in the civil service are, as they pay their hefty salaries.

LEAVING Mrs Karsera aside, I would like to take issue with a couple of the points raised by Dr Clerides in his letter. He wrote: “Mrs Karsera is not a public figure so there is no issue of criticism within the framework of a democratic pluralistic society. She serves the public interest as a public official and is subject to the relevant rules, the law and the Constitution.”

By Dr Clerides reasoning, we cannot express any criticism of a civil servant because he or she serves the public interest. So even if a civil servant is rubbish at their job and does not serve the public interest, is involved in sleaze (this is no reference to Mrs Karsera in any way), a newspaper cannot express criticism “within the framework of a democratic pluralistic society”?

He concludes the letter, quite patronisingly, urging us to “comply in your articles with the code of ethics and the existing legislation, ensuring respect for human rights and basic freedoms, as these are safeguarded by the Constitution and ΕΣΔΑ(sic).”

We hope now he is President of the Bar Association, Dr Clerides, who is an expert in human rights, will issue a directive to all media, informing them in which cases they would be able to exercise the right to free speech, also safeguarded by the Constitution as far as I know, and which civil servants, apart from Dr Clerides’ clients of course, they are entitled to criticise.

SPEAKING of human rights, that pedant οf pedants, Commissioner for the Protection of Personal Data, Irene Loizidou Nicolaidou, has finally come up with a decision about distance learning at public schools. It took her only seven months to decide whether a camera could be used during lessons in public schools and not violate the right to privacy of teachers, whose unions were strongly opposed to its members being filmed while teaching. One reason for this opposition, mentioned by a union boss on a radio show, was that a kid’s parent would gossip about the clothes worn by teachers if they saw them. Anyway, the commissioner has come up with some half-baked decision which allows the use of a camera, I think. The next step would be for a teacher to take the Republic to the ECHR because the mother of one of her students was heard saying she had an appalling dress sense.