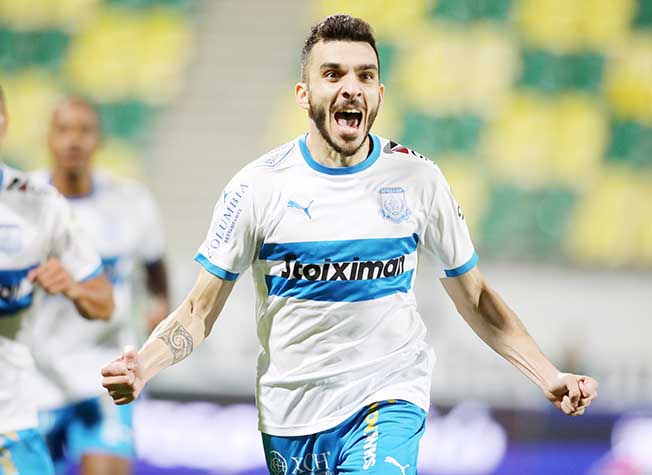 Apollon have returned to the top of the Cyprus first division after their win over AEK Larnaca on Sunday, after previous leaders Anorthosis were beaten by AEL in Limassol earlier in the day.

Apollon and Anorthosis are currently tied on 23 points (with Apollon having a game in hand), however, Apollon are top due to their superior head-to-head record.

Apollon’s 2-1 away win in Larnaca was their first game under new manager Giannis Petrakis. Although it was a balanced game overall, Apollon managed to find a bit more incision in their play, scoring once in each half and generally creating a number of promising opportunities.

Speaking after the game, the Apollon manager congratulated his players and expressed his joy at the positive result.

“We achieved a great victory. I have to offer many congratulations to my players for their great effort and the great performance throughout the game”, Petrakis said.

“We controlled the game in both halves. We didn’t allow AEK to create a lot of opportunities against us and we could have scored more. I’m very pleased but tomorrow we have a lot of work to prepare for the next game”, he added.

In his post-match interview, Apollon forward Ioannis Pittas, who scored the first goal of the game, said that the team’s aim should be to remain at the top throughout the campaign.

“I’m pleased with my performance. My job is to score goals”, he added.

The aforementioned game between AEL and Anorthosis included intense complaints aimed at the referee Chrysovalantis Theouli from both sides.

Anorthosis protested a goal chalked off for offside, as well as an incident inside AEL’s penalty area which the Famagusta club deemed illegal. From the angle provided by Cytavision, the offside call appeared to be correct, while the penalty incident could have gone either way. There was a challenge from the defender but a penalty call would be on the soft side.

Meanwhile, AEL called for a penalty of their own when a shot struck Artymatas’ hand just inside the penalty area. Although there was contact between the hand and the ball, it is up to the judgement of the referee to determine whether there was much the defender could do about it, at least until VAR is implemented.

Anorthosis manager Temur Ketsbaia continued his succinct if not terse post-match press conferences by offering a total of 27 words (in Greek) after the game.

“We took from the game what we gave and we gave nothing. Congratulations to AEL. We are now focused on the next game”, said Ketsbaia.

Answering a journalist’s question as to what was missing from their performance, Ketsbaia said that “it’s not about what was missing, it’s that we had nothing and this is why the result is what it is”.

AEL manager Dusan Kerkez said that he was pleased with the result and offered his wishes for a speedy recovery to two players who have been affected by Covid-19.

“I’m certain that our win was a fair one. I knew that not many goals would be scored today. My players did exactly what I asked of them. We kept a clean sheet. They deserve congratulations. We are close [to the top] and where we should be. I wish good luck to Temur Ketsbaia”, Kerkez said.

“I want to offer my wishes to [AEL player] Gevorg Ghazaryan and [Anorthosis player] Hovhannes Hambardzumyan who have Covid-19. We give them our strength”, Kerkez added.

Elsewhere, the two Nicosia giants continued faltering, with Omonia losing away to Salamina and Apoel getting beaten at home by Olympiakos.

The loss against Olympiakos was in Mick McCarthy’s first home game in charge of Apoel. Speaking after the game, McCarthy said that losing is not something that can be tolerated and acknowledged the difficulty of the task at hand.

“We started the game well but Olympiakos were better in the first half. Olympiakos scored from our own defensive mistakes. A loss is not acceptable at Apoel. We have to do better in the future”, McCarthy said.

“I knew I didn’t have an easy job to do. We’ve only scored six goals this season. This is the root of the problem. If you can’t score you can’t win. I’m very disappointed at our chance creation and finishing”, McCarthy added.

Meanwhile, Omonia have failed to win for the fourth game in a row, losing twice and drawing twice.

Omonia did enough to win the game, creating a number of promising situations in which the they could have scored. However, credit has to go to Salamina for digging in and grinding out a result.

Speaking after the game, Omonia manager Henning Berg expressed both his disappointment at the result, as well as his surprise at how efficient Salamina were at making the most of their chances.

“We should have scored more goals and had many chances in the first half. We are disappointed. With all that took place during the game we should have won. We have to find our confidence again and become competitive. We have to improve”, he added.

“The team can recover. We are used to the busy schedule. Our priority is the league and the cup. My starting elevens are determined with this in mind”, Berg concluded.

Karmiotissa and Ethnikos Achnas drew 1-1 in the final game of the round on Monday evening.