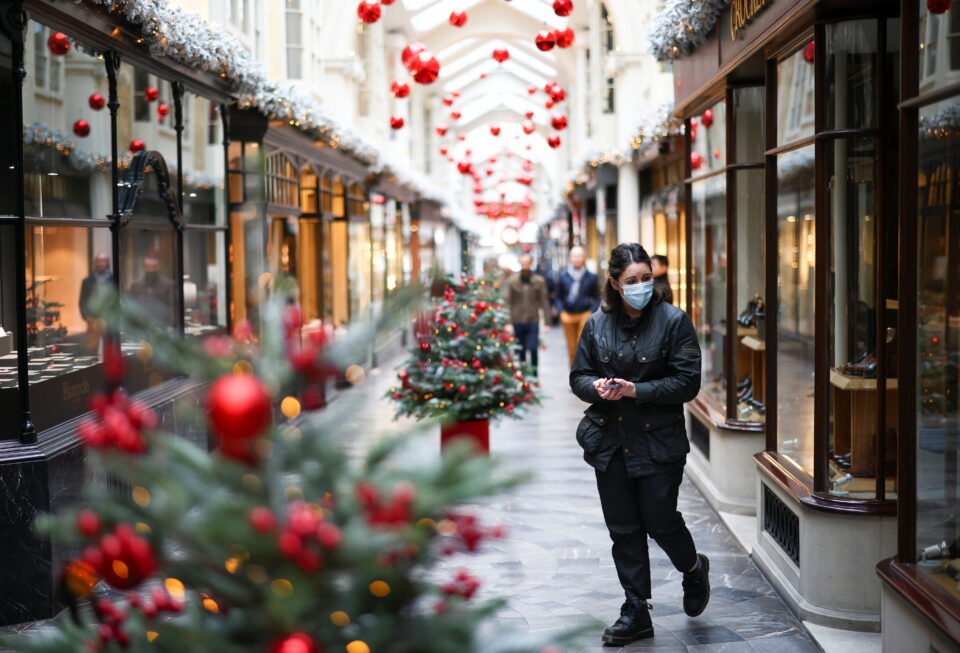 A woman walks through the Burlington Arcade adorned with Christmas decorations, amid the coronavirus disease outbreak, in London

People in Britain will need to consider their Christmas travelling routes carefully if COVID-19 restrictions are temporarily relaxed for a fixed period over the festive season, the transport minister said on Tuesday.

“I want to be completely up front with you. We are going to have to ask people to take a close look at any proposed journey and think about the routes that they’re taking,” Transport Secretary Grant Shapps told BBC TV.

The government said on Sunday that restrictions could be eased across Britain over Christmas to allow families to get together for a period of up to five days, leading to forecasts of gridlock as people all set off on the same day.

Christmas is always a busy time to travel, said Shapps, but the pandemic will add extra congestion, particularly on the railways with the need to social distance.

Shapps said he would do all he could to minimise planned Christmas engineering works on the rail network, but said some would have to go ahead as they had been scheduled two years in advance.

German states plan to let up to 10 celebrate Christmas together

Germany’s 16 federal states plan to allow gatherings of up to 10 people over Christmas and New Year, offering some relaxation of coronavirus restrictions to let families and friends celebrate together, a draft proposal showed on Tuesday.

The premiers of the states are due to discuss their plans with Chancellor Angela Merkel on Wednesday. Berlin mayor Michael Mueller told ARD television he was confident the measures, agreed by the leaders late on Monday, would be adopted.

The premiers of two states also said there was broad agreement to extend a national “lockdown light” until Dec. 20 to slow the spread of the COVID-19 pandemic, to make family gatherings over Christmas possible.

Germany closed bars, restaurants and entertainment venues on Nov. 2 for a month. Schools and shops remain open while private gatherings have been limited to a maximum of 10 people from two households.

Under the new plans, private gatherings would be limited to a maximum of five people until the Christmas period. In addition, fireworks would be banned in public places on New Year’s Eve to avoid large numbers of people gathering.

But the relaxation over Christmas is aimed at bringing some relief to families.

“Christmas and other end-of-year festivities should be possible as celebrations with family and friends even in this unusual year, albeit on a smaller scale,” the draft said.

The premiers also agreed to extend into December aid for firms hit by the restrictions introduced in November.

The daily number of confirmed coronavirus cases in Germany rose by 13,554 in the latest 24-hour period to 942,687, the Robert Koch Institute (RKI) said on Tuesday. The reported overall death toll was 14,361.

The Spanish government will propose to regional authorities a six-person limit for Christmas and New Year’s parties when they involve guests, El Mundo newspaper reported on Tuesday, citing a health ministry draft document.

Also, office gatherings and similar celebrations in the run-up to the holiday season would be limited to six people and preferably be held on restaurant terraces, outside or in a place with “no more than two walls”, it said.

The document recommends planning “different” Christmas celebrations without taking out the “soul and spirit” of the most popular holiday in the country.

The health ministry will discuss the document with the regions’ health chiefs, who could still introduce changes.

Spain, which has more than 1.58 million COVID-19 cases – western Europe’s second highest tally after France – and 43,131 dead – imposed a six-month state of emergency in October, giving regions legal backing to impose curfews and other restrictions.

Prime Minister Giuseppe Conte has warned Italians not to ski during the Christmas holidays to help curb a second wave of the new coronavirus pandemic that has killed more than 50,000.

Italy’s ski resorts earn annual revenues of about 11 billion euros ($13.06 billion), one third of which comes from the days Italians usually spend on the Alps and Dolomites at Christmas and New Year.

But Conte said this year it would not be possible “to allow holidays on the snow. We cannot afford it”.

Italy reported 630 COVID 19-related deaths on Monday, becoming the sixth nation in the world to surpass 50,000 deaths, and the second in Europe after Britain.

Many Italian regions are under partial lockdown to try to slow the outbreak, with restrictions due to stay in place until at least Dec. 3.

Shopkeepers, hotels and restaurateurs are pinning their hopes on a revival of business around the normally busy Christmas period to revive their battered fortunes.

Most of the ski resorts are concentrated in the northern regions of Piemonte, Valle d’Aosta, Lombardy, Trentino, Alto Adige. In a desperate effort to keep their business alive after Dec. 3, the regions have set a protocol which introduces restrictions on the number of passengers carried by ski lifts and on the daily ski passes.

“The protocol is one thing, but everything that revolves around holidays on the snow is uncontrollable,” Conte said late on Monday in an interview with La7 television.

Valeria Ghezzi, president of the Italian lift association, told Reuters: “Conte should remember that an economy that supports entire mountain communities is at risk.”

Italy is part of the European Alps along with Austria, France, Slovenia and Switzerland. It hosts, together with France, the highest summit of the Alps, Mont Blanc, and shares the Matterhorn with Switzerland.

Conte said that he has held talks with French President Emmanuel Macron and German Chancellor Angela Merkel over a “common European protocol”.