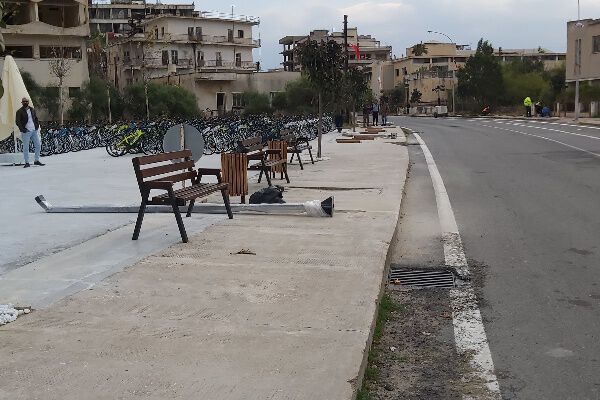 Turkish Cypriot leader Ersin Tatar said on Wednesday that their side would not stop “until every last square metre” of Varosha was reopened.

The comment came as reports surfaced in the Turkish Cypriot press that new LED lighting and benches were being installed on Demokritos Avenue and on John Kennedy Avenue, the main thoroughfare in Varosha.

The avenue’s name was changed by the Turkish Cypriot side on the weekend to Semih Sancar Street. Sancar was the chief of the general staff of Turkey who was at the helm of the Turkish army during the 1974 invasion.

According to Turkish Cypriot newspaper Kibris Postasi, which uploaded photos, work was already underway with the lighting and the benches on the two main roads, and also on other streets in the fenced-off area on Tuesday.

The goal, the paper said, was to complete the lighting by next summer when Varosha would also be opened in the evenings.

Turkey and the Turkish side first opened part of Varosha on October 8, allowing over 2,000 visitors to enter certain roads and visit the main beach the first day. The move has been widely condemned.

Kibris Postasi said that since the partial opening, until November 23, a total of 67,459 people had visited the town. Some Greek Cypriots originally from Famagusta have also paid emotionally charged visits to the ghost town.

According to another media outlet in the north on Tuesday, bike paths have been placed in eight different parts of the town.

The Turkish Cypriot ‘mayor’ of Famagusta Ismael Arter was quoted as saying they wanted to turn Varosha into a city “where people live again, where people are on its streets, where children’s voices are heard in its alleys”.

“You cannot immediately create a living city,” he said, adding that private property would not be touched for now.

In terms of Greek Cypriot properties in Varosha, Tatar, speaking to the Turkish newspaper ‘Turkiye’, said over 300 applications had been submitted to the north’s immovable property commission by Greek Cypriots both “in the south” and those living abroad asking for their properties back in the fenced-off area that has been closed to all except the Turkish military since 1974.

“It is time to draw a new roadmap,” Tatar said. “We don’t want to waste any more time, so the Greek Cypriots must sit down and reflect on their own mistakes.”

“We have proven to everyone that we want to do something about Varosha, more than anyone else actually,” he added, saying that he would continue “until the last square metre” of Varosha was opened.

“Those who oppose us must realise they are not the holders of universal truth. So, from now on we will do what we think is right,” he said.

The Turkish Cypriot leader added that he would meet President Nicos Anastasiades again soon, although he did not reveal exactly when. UN envoy Jane Holl Lute is due in Cyprus in the coming days. The leaders met for the first time earlier this month. Tatar described it as a social meeting.  “Whatever you call these meetings… the only reality is that conditions have now changed,” he said.

The partial opening of Varosha by the Turkish side, and the visit there by Turkish President Tayyip Erdogan on November 15, has been widely condemned.

Borrell said recent events around Varosha, including Erdogan’s visit and statements, come at a time when attempts are underway to create space for dialogue on Cyprus settlement issues and on the wider Eastern Mediterranean.

“We are passing this message clearly to our Turkish interlocutors. I have also passed it personally to the new Turkish Cypriot leader: This is the time to support United Nations Secretary-General Guterres in his efforts to resume the Cyprus settlement talks. Spreading distrust and stoking tensions help no-one,” Borrell said.