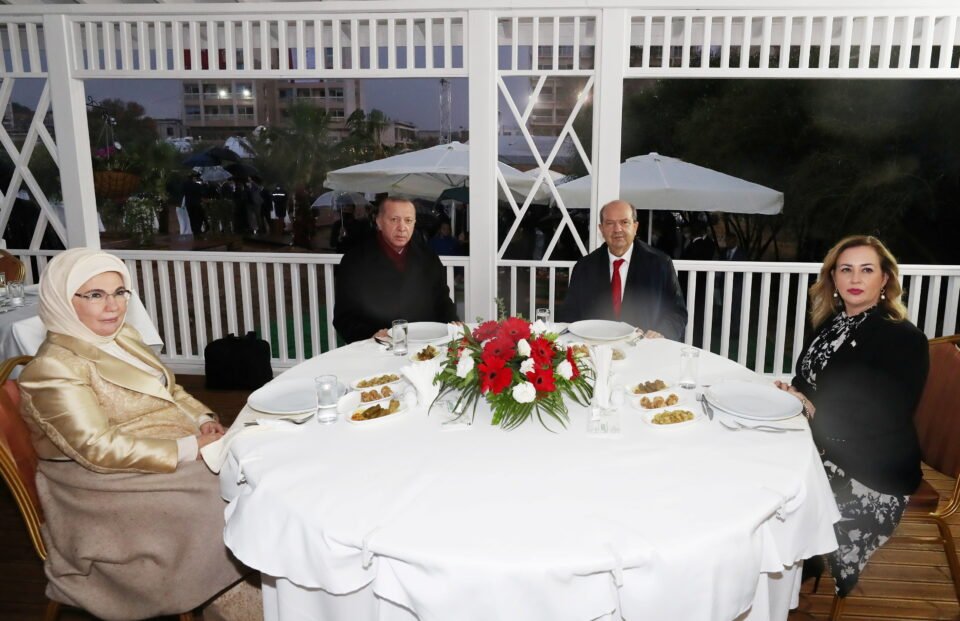 Erdogan, Tatar and their wives on Varosha beach

France is leading a push for European Union sanctions on Turkey next month to follow through on a threat made by the bloc in October, but has yet to win support from EU governments beyond Greece and Cyprus, officials and diplomats said.

Paris says Turkish President Tayyip Erdogan has not heeded EU leaders’ warnings on Oct. 1 to back down in a dispute over gas exploration in the Mediterranean or face consequences.

The European Parliament on Thursday is expected to call for sanctions, decrying Erdogan’s visit earlier this month to the breakaway Turkish Cypriot north of the island of Cyprus.

“Turkey knows what it needs to do,” France’s Foreign Minister Jean-Yves Le Drian told a French parliamentary hearing this week. “Confrontation or collaboration, it’s up to them.”

The Turkish Foreign Ministry has criticised the EU for discussing sanctions, saying such debate was not helpful.

No detailed sanctions have been drawn up by France, but diplomats say any measures would hit areas of Turkey’s economy aimed at limiting Turkish hydrocarbon exploration, likely in shipping, banking and energy.

Also at stake are a plan to broaden Turkey’s trade preferences with the EU, its top trading partner, and its formal status a candidate to join the EU, which Austria says should end. Erdogan has called for a boycott of French goods, which one EU diplomat said did not bode well for deeper trade relations.

“However, Turkey is a key partner in many areas, so there’s no consensus in the Council (of EU governments). It is still too early,” said another EU diplomat.

France is also at odds with Turkey over the Nagorno-Karabakh conflict. Paris has accused Ankara of fuelling the crisis in the Caucusus, a charge it rejects.

Turkey, a member of NATO, has slid towards authoritarianism, undermining EU priorities in Syria and Libya, but remains a strategically located partner that the EU cannot ignore.

Support for any sanctions lie with Germany, which holds the EU’s six-month presidency. Berlin put its hopes in mediating between Greece and Turkey but was angered when Ankara, which withdrew an exploration vessel before EU leaders met in October, began exploring for gas off Cyprus again last month.

“Erdogan really went too far with the Germans,” a senior French official told Reuters. “They didn’t take at all well the new ship going back to the eastern Mediterranean just after the Oct. 1 summit.”

A new spat between Germany and Turkey over the interception of a Turkish vessel in the Mediterranean this week has worsened already deteriorating EU-Turkey ties. Turkish Foreign Minister Mevlut Cavusoglu said the boarding was an act of “piracy” and summoned EU, German and Italian envoys to protest, which Berlin said was unjustified.

“I think now there’s a common understanding that there will be sanctions,” said a senior EU diplomat. “The question is what the market will bear.”