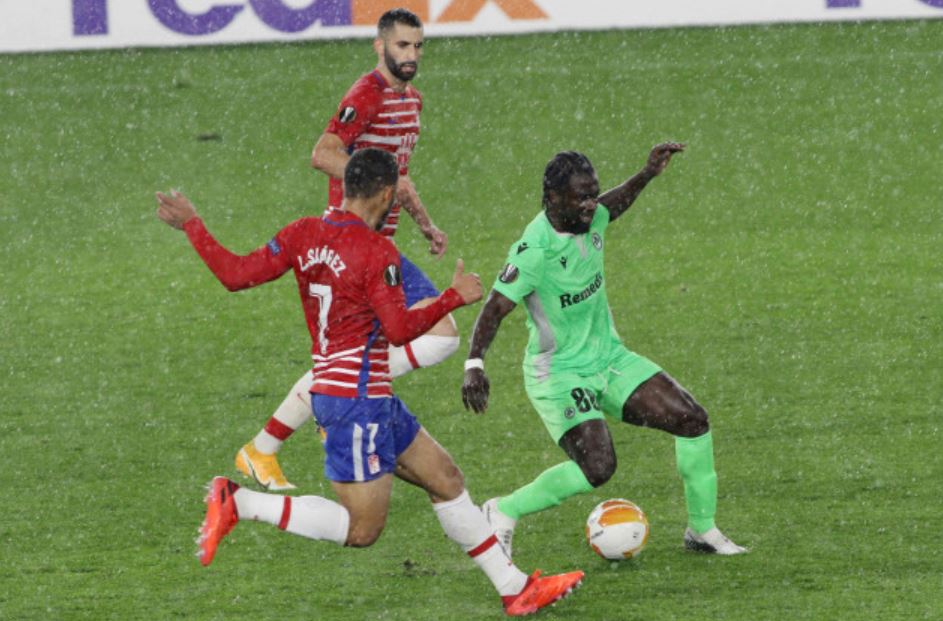 Omonia suffered a narrow defeat at the hands of Spanish side Granada on a rainy Thursday evening with the Cypriot side losing 2-1 after a valiant away display.

Granada took the lead in the eighth minute when Soro dispossessed Shehu near the edge of the Omonia’s penalty area before passing to Luis Suarez who deftly finished to put the Spaniards ahead.

Omonia manager Henning Berg received a yellow card from the referee in the twelfth minute after protesting a decision a bit too passionately for the match official’s liking.

While Omonia settled into the game as the match progressed, it did not become any easier to create any promising opportunities. Granada’s defensive approach off the ball was a combination of pressing depending on certain triggering events and cutting off passing angles through clever positioning.

Omonia attacking midfielder Eric Bautheac suffered a knock after a clash with Maxime Gonalons in the 30th minute. Although Bautheac tried to continue after being treated, he remained in visible pain, limping for the next two minutes and having to be subbed off for Ernest Asante.

The quality of the game was not helped by the increasingly heavy downpour at the Nuevo Estadio de Los Cármenes.

Granada could have doubled their lead in the 41st minute when Soro released Suarez on the inside-left channel of Omonia’s penalty area who then cut the ball back to Soldado who sliced it just wide.

Omonia were in danger of conceding a second goal in the 46th minute of the second half after a Soldado shot deflected off defender Adam Lang but luckily for goalkeeper Fabiano the ball hit the post.

Granada threatened again in the 56th minute when Gonalons met the ball with his head after a free-kick from the left-hand side but couldn’t manage to keep it down.

Henning Berg tried to change things in the 57th minute with a triple change. Shehu came off for Jordi Gomez, Lecjaks replaced Kiko, while Thiago came on for Tzionis.

Just three minutes later, Omonia equalized through an Ernest Asante goal in the 60th minute. Lecjaks crossed from a very wide and deep position with the ball skidding across the entire Granada defensive line where it was met by Asante at the far post.

Granada retook the lead in the 73rd minute when a Darwin Machís shot was blocked by Fabiano before Soro headed the rebound into the net.

Omonia got close to an equalizer in the 84th minute when a Mavrias cross from the right was headed just over the bar by former Juventus youngster Kaly Sene.