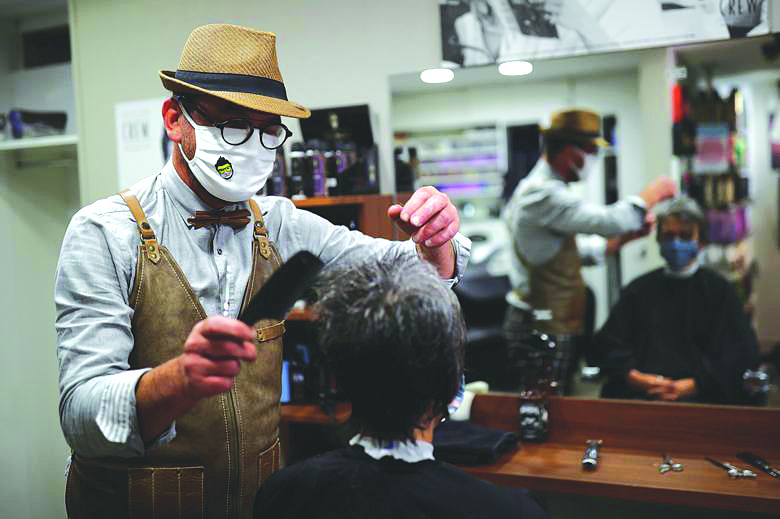 People eager to get a haircut stood in line outside barber shops and department stores selling gifts and Christmas decorations were busy on Saturday as France partially reopened following a month-long lockdown.

Shops selling non-essential goods such as shoes, clothes and toys reopened in the first easing of a nationwide lockdown that started on Oct. 30 and will remain in place until Dec. 15. Bars and restaurants remain closed till Jan. 20,

“Today we have people who had been waiting for weeks while others are coming now so they can look good for Christmas, as one never know what happens next,” Remi Thor, a barber in central Paris, told Reuters.

A barber at J-Coiffeur in western Paris said that despite his online reservation system, people were showing up anyway without booking and were queuing up outside.

“Under current rules, they cannot wait inside,” he said.

As a condition for reopening, the government reduced the number of people allowed in shops, a challenge for small retail outlets.

At Printemps – whose 19 luxury department stores have a combined floorspace of 180,000 square metres – the director of the flagship Paris Boulevard Haussmann store, Pierre Pelarrey, said the store was tracking footfall closely.

“We calculate the traffic in real time to make sure we respect the limit on the number inside,” he told Reuters.

Many small business owners complained it was hard to operate under the new rules and said traffic was slow as clients were postponing their shopping until Black Friday, which has been delayed by a week to Dec. 4.

Paris deputy mayor Emmanuel Gregoire said on franceinfo radio that the mayor, Anne Hidalgo, would hold talks with retail organisations about allowing them to open on Sundays to catch up on lost sales.

“2020 will be a catastrophic year for everyone, but in order to limit the damage, December will be crucial,” he said.

The government has already allowed shops to open till 9 p.m. so they can receive more customers despite the surface limits.

At the Pasteur hospital in the Mediterranean town of Nice, whose intensive care unit is running double its normal bed capacity because of COVID-19, ICU head Carole Ichai said she hoped people would be responsible.

“I hope we will not regret this opening. Shopowners are making an effort, now everyone needs to take their civil responsibility serious,” she said.