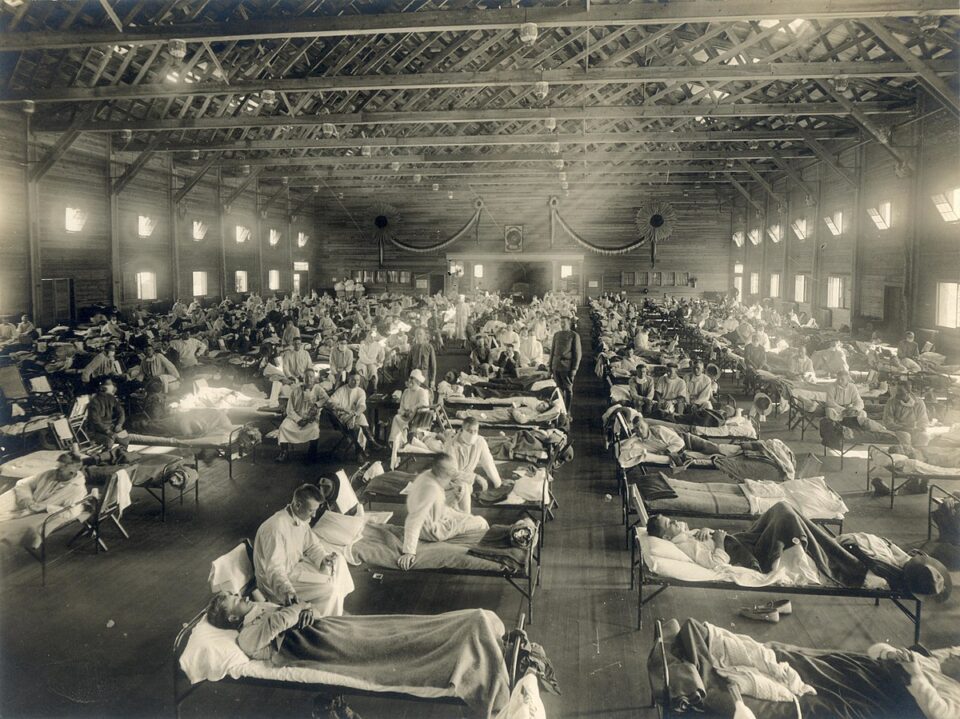 Coronavirus is not the first pandemic to have gripped the world. One hundred years ago the Spanish flu saw schools in Cyprus close, people fretting and the devastation of towns and villages

The following item (originally in Greek) appeared in the December 28, 1918 issue of Neon Ethnos newspaper, part of the weekly ‘Dispatch from Reuters’ which was how local papers got their world news in those days:

“A medical correspondent for The Times writes that he has every reason to believe that about six million people have died from influenza over the past 12 weeks.

“It is estimated that the war, during its four and a half years, caused the death of 20 million. Therefore, the illness in question has been five times more deadly than the war – because, were it to be extended to the same period, it would mean the death of 108 million people.

“Never since the time of the Black Death has such a plague devastated the world, and never has there been a more urgent need for strict measures surrounding public health.”

‘The war’ was of course WWI, which had ended just a couple of months earlier. The ‘illness in question’ was the so-called Spanish flu pandemic, then in its second and deadliest wave – the worst pandemic of the 20th century, and a useful way to gain some perspective during our own public-health crisis a century later.

The numbers are daunting. Spanish flu infected 500 million people, a third of the world’s population at the time, and killed about 50 million between February 1918 and April 1920. Covid-19, at time of writing, has killed just under 1.5 million. Some may assume that’s because of the lockdowns and other precautionary measures we’ve taken – but in fact, given Covid’s probable mortality rate of about 0.5 per cent, it wouldn’t cause 50 million deaths even if it infected every single person on the planet. (It’s true, however, that many of the deaths in 1918 were caused by bacterial infections – which we now treat with antibiotics – rather than the virus itself.)

Spanish flu, like coronavirus, was a global pandemic. Cyprus seems to have been spared the first wave in the spring of 1918 – but it was clearly hit hard by the second wave. On December 28, the same date as the Times correspondent’s lament in Neon Ethnos, another local newspaper, Eleftheria, editorialised on influenza, ending on the following doom-laden note:

“Statistics have not been compiled as to the deaths caused by influenza in Cyprus, otherwise we would be looking at incredible numbers, producing horror and despair. The fact, however, that people are dying on a daily basis is enough to compel the taking, without delay, of all necessary measures.” The colonial government had to act, proclaimed the paper, “so that we will not be faced, before too long, with an Island [sic] that has literally been desolated of all human life”.

The pandemic began locally, in the west of the island. Neon Ethnos had correspondents in all the major towns, and, on November 9, its ‘Report from Limassol’ talks quite happily of unseasonably warm and sunny weather; the ‘Report from Paphos’, however, includes the first mention of the coming storm. “An outbreak of Spanish flu has been plaguing our town for days. There are cases everywhere, [and] the middle school suspended classes for a few days”. The flu – unlike Covid – was lethal for kids as well as adults.

Over the next six weeks, the situation deteriorated rapidly. On December 7, municipal authorities issued advice on how to deal with the flu, asking sufferers to avoid any contact with friends and family and to spit (!) into special spittoons filled with antiseptic fluid (as opposed to spitting in the street, presumably). A week later, more measures were added, calling on schools to open later – to avoid children walking to school in the early-morning cold – and instructing kids to wait for the weather to improve if it were raining hard or especially chilly. Cinemas had to start at 8pm and the film had to be over by 9.30 (films were admittedly shorter then), with regular disinfections carried out during the screening. 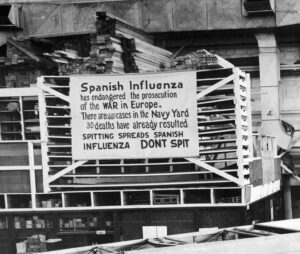 On December 21, Eleftheria reported: “Villages are literally being devastated by influenza. In the villages of Askas and Alona, more than 20 people have already died of the disease and twice that number are infected, while a day doesn’t go by without one or two deaths being recorded.” A week later, in Neon Ethnos: “Influenza continues to devastate both towns and villages. In the village of Pervolia, near Larnaca, 14 people have died in the past two weeks, among them Mr. Panayiotis K. Lazarides who is well-known to us, leaving a widow and four underage children to whom we send our condolences.” The picture was presumably the same islandwide, Pervolia being highlighted only because it was where the writer’s late friend used to live, not because it was unusually bad.

A death (or more) per day in most villages – not to mention those in the towns – is a chilling statistic. December 1918 must’ve been a nightmare, in Cyprus as in most other countries. As the year turned, however, the pandemic receded – and of course this is where today’s coronavirus has the edge, being a new (‘novel’) virus that can persist for a long time as it makes its way through the population. (Spanish flu, on the other hand, was caused by an unusually severe strain of the H1N1 influenza virus.) Then again, there are also reports of people falling ill twice or even three times in 1918-19, so maybe that virus too could’ve continued to ravage the island for months.

At any rate, things got better. Even Eleftheria, so alarmist in late December, had largely relegated the flu to its light-hearted gossip column ‘Tis Stigmis’ (freely translated as ‘Quick Bites’) by January. “Today, wherever you go, the only subject of conversation is the flu,” wrote this columnist on January 4 (sound familiar?). “People are gripped by flu-phobia. Yet, in the view of renowned European doctors, the disease is often made worse by fear!”

“Some doctors recommend brandy as a cure for the flu, others recommend tobacco and others cigars,” quipped the column the following week, clearly having fun with it now. (The gag about cigars was apparently a popular one; a later column jokes about the phenomenon of young ladies smoking cigars ‘for their health’ all the time.) “But there are also doctors whose recommendation is to have at least 10 doctor’s visits per day for those suffering from flu – which, they say, is the best way to save both the patient and the doctor!”

By January 25, the focus had turned to other countries: “In America, and in other European nations, many have taken to walking in the streets wearing face masks to fight the flu”. (The previous week’s paper had actually included instructions on how to make a mask, so it wasn’t unknown in Cyprus either.) By the first week of February, influenza barely rated a mention: “Fortunately,” wrote the column, “the pandemic seems to have weakened altogether”.

Looking back, it’s remarkable how quickly the world went back to normal after such a deadly pandemic. One reason is undoubtedly that the official response was never as extreme as ours is today. Schools closed briefly, as already noted, people fretted endlessly – but social life continued, and businesses stayed open. Looking through the Cyprus state archives, where government papers from the days of the British are kept, one finds no special reference to Spanish flu beyond a single ‘Memorandum on Prevention of Influenza’, dated February 1919 and sent to all colonies from the UK. “The present epidemic is virtually world-wide,” it notes noncommittally, adding that “similar world-wide epidemics occurred in 1803, 1833, 1837, 1847 and 1890”.

Indeed, it’s startling to discover a separate, slightly later correspondence on vaccines, from October 1919 (just a few months after The Times had likened Spanish flu to the Black Death). The usual supply route, from Egypt, had apparently dried up, and a civil servant in the Stores department (his signature is illegible but he calls himself a “layman”, i.e. not a medical officer) noted the urgency of finding an alternative route as soon as possible: “An outbreak of diphtheria or meningitis could not be met with the stock in hand, I suspect,” he writes. “If cholera should come, there is little vaccine to meet it with – or influenza. And the anti-anthrax serum seems little for a country where anthrax is not, I believe, uncommon.” That casual “or influenza” – mentioned almost as an afterthought – says it all.

This, one presumes, is the other reason why the world (and Cyprus) went back to normal so quickly – because ‘normal’, in those days, included a near-constant litany of epidemics and deadly diseases. It’s actually shocking to discover what an unhealthy, lice-ridden place our island was a century ago. (“I never saw a filthier spot,” Sir Garnet Wolseley, the first high commissioner, famously declared upon alighting in 1878.) Malaria was endemic, “worse than the fevers of west Africa in its symptoms” according to early British observers (quoted in a book called Medicine in Cyprus: From Antiquity to Independence, published by the Laiki Group Cultural Centre in 2006). There were 82 lepers in 1918, 611 cases of typhoid fever, 128 cases of phthisis. In August 1919, soon after Spanish flu subsided, Eleftheria was once again sounding the alarm, this time for “the accursed disease of smallpox [which] has spread from the District of Limassol to Paphos. It is feared that it will extend to the whole Island, so long as the necessary measures are not taken”.

Above all, looking back at the Spanish flu pandemic makes it clear that life goes on, a truth that’s easy to forget after almost a year of corona. Even at the time, there was so much else to worry about (and celebrate, after four years of war). Local newspapers wrote about Bolshevism, Venizelos, the Pedieos river flooding its banks – which was actually a much more existential threat to Nicosia in the heavy winter of 1918 than the pandemic.

Even that apocalyptic missive from The Times, citing six million deaths in 12 weeks, only appeared at the tail-end of that particular week’s dispatch from Reuters. Flu might be plaguing the world, worse than anything since the Black Death – but top spot went to Lloyd George estimating that the war had cost the Allies some £24 billion (wow!), while the runner-up was both terse and brutal: “The president of Portugal has been assassinated. The mob then killed the assassin”. So much for viruses.