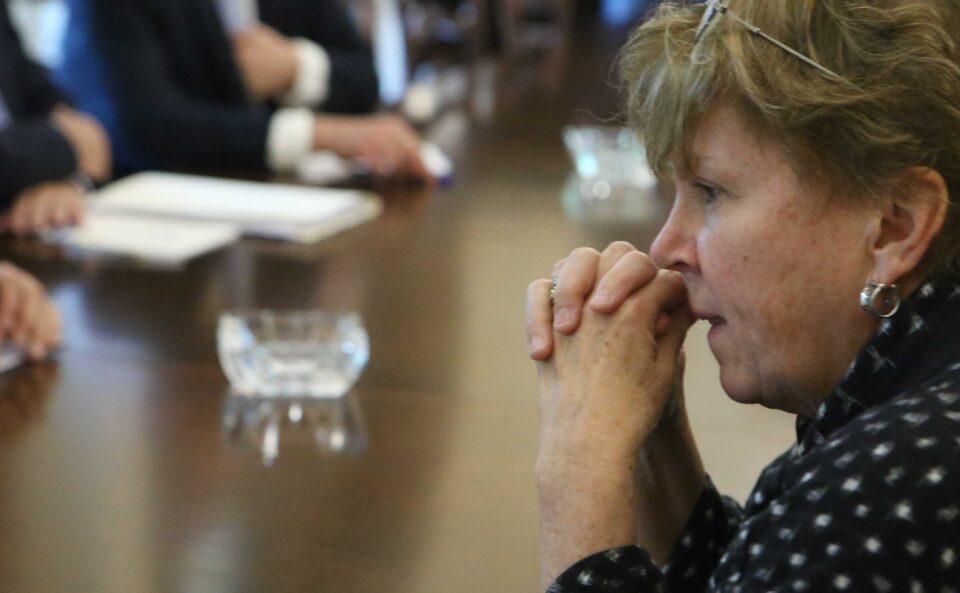 Lute Is A Woman Of Few Words

The UN’s special envoy to Cyprus, Jane Holl Lute, will be back on November 30 on what many people regard as mission impossible.

She is Graham Green’s classic quiet American: urbane and civilised, if she speaks at all it is normally just to say hello and goodbye. She is sphinx-like and like the sphinx her silences are pregnant with expert knowledge and perseverance.

She will listen and report back to UN Secretary-General Antonio Guterres and they will then decide what, if anything, is to be done about Cyprus. He has been criticised for seconding her to the Cyprus desk away from her previous assignment as UN special coordinator for sexual exploitation and abuse but it looks as though that was sorted and she will fly in to explore if the Cypriots intend to engage in meaningful negotiations or just mess the international community about again.

Among her many qualifications, Lute boasts a doctorate in political science from Stanford University, one of the America’s best, and is also a doctor of jurisprudence and a member of the Virginia Bar.

She served as a second lieutenant in the US Army and is married to Lt General Douglas E Lute. She was appointed Deputy Secretary of State of Homeland Security by Barack Obama and her husband did a stint as his national security adviser for Iraq and Afghanistan before being sent to Nato as US permanent representative. At present she moonlights in the private sector as a cybersecurity expert, which she combines with her job at the UN as Assistant Secretary-General for Peacekeeping.

What is interesting to notice now that regime change in the US is in progress is that Ms Lute and her husband were part of the Obama-Biden administration pre Trump before he dismantled all their achievements: the nuclear deal with Iran, the treaty on climate change, closer relations with Cuba and the rest, all sacrificed on the altar of Trump’s intense personal animosity towards America’s first black president.

Now that quiet Americans like Ms Lute are back in vogue we are likely to see a more coherent, less whimsical foreign policy without fake news and alternative facts.

So, although her Cyprus mission may be a fool’s errand its intractability is a challenge, and helping crack it may add to her prospects of a place in Biden’s government. Who knows?

Cyrus Vance who sorted out the 1967 crisis in Cyprus by shuttle diplomacy became Secretary of State under President Jimmy Carter between 1977 and 1980. Vance said afterwards that the trick was first to identify the weaker side and provide it with a ladder to climb down which worked wonders because he was dealing with a military confrontation. The ladder metaphor does not work, however, if you are trying to probe the extent to which the parties are committed to a federal arrangement when neither side wants it.

What Ms Lute needs in the current impasse is not a ladder but a set of well calibrated scales to balance out the terms on which a further meaningful dialogue can take place after the debacle at Crans-Montana.

The Turkish side used to be in favour of a federation but is now blowing hot and cold on whether it wants to negotiate for a federal outcome. There is talk about a two-state solution, which apparently is not the same as two independent states. The mental gymnastics necessary to understand this are outside my range, but I hope Ms Lute will adopt a step-by-step approach and leave out of account any talk of two states.

The American federal model, particularly its system of checks and balances that enables it to achieve a workable symbiosis of representation of the people on one hand and state equality on the other, is the best model to emulate.

The US federal model is attractive because it is flexible. Constituent states of a potential union agree to unite as one entity internationally and as separate entities domestically, conferring power to the federal government as and when it is necessary or expedient. It enables a gradual trial and error system of government which is ideal for problems that require space and time after years of discord, division and distrust. Let there be spaces in your togetherness said Kahlil Gibran the Maronite Lebanese philosopher poet in his short book The Prophet and although he was speaking about marriage what he said applies more broadly to political relationships too.

According to the preamble to the American constitution it was established “in order to form a more perfect union, establish justice, ensure domestic tranquility, provide for the common defence, promote the general welfare and secure the blessings of liberty.”

The founding fathers of the US constitution were not ordinary politicians. They were philosopher-statesmen who thought deeply about political problems and were inspired by the Enlightenment and Montesquieu’s separation of powers and how to blend those ideas into a federal structure.

Alas we have no philosopher statesmen around to help us devise a federal constitution. But we have Zeno of Citium, the founder of stoic philosophy that teaches us that it is not what you want but what you need that counts, a long time before Mick Jagger sang “you can’t always get what you want.”

Lute thought to be looking for signs of movement