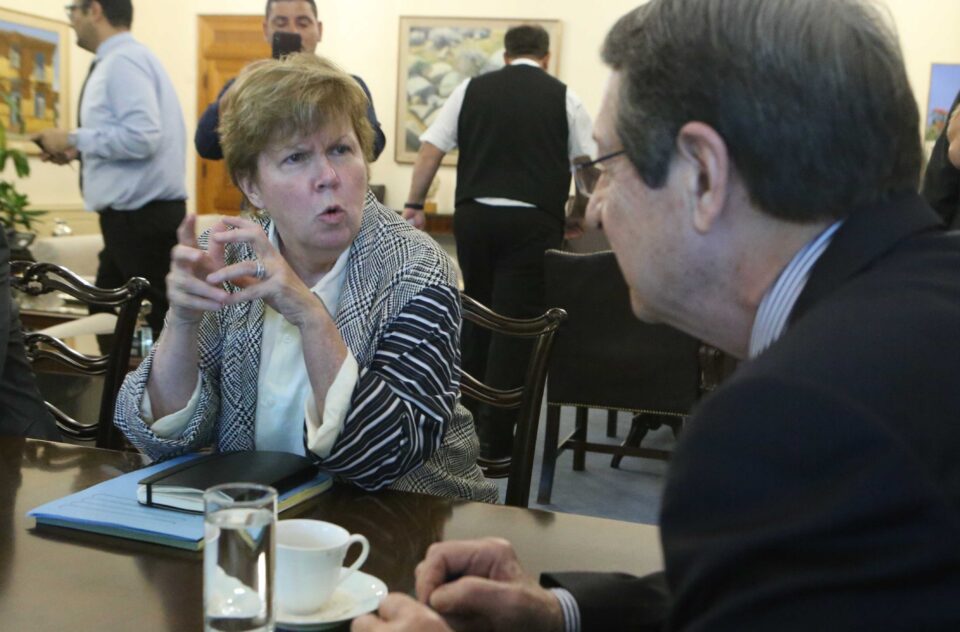 The UN Secretary General’s envoy Jane Holl Lute returns to the island on Monday with the aim of securing the agreement of the two sides for a five-plus-one conference on the Cyprus problem.

A year has gone by since her last visit and she will have to deal with a widening gulf between the two sides, the newly-elected leader of the Turkish Cypriots Ersin Tatar now advocating a two-state solution that is also supported by Ankara. The situation has been made even worse by Turkey’s decision to open Varosha.

This will be Lute’s eighth visit since she was appointed by Antonio Guterres in 2018 with the brief of brokering an agreement on the terms of reference that would have paved the way for a resumption of the peace process. Although she failed to achieve this objective, a meeting took place between the Turkish Cypriot leader Mustafa Akinci and President Nicos Anastasiades in Berlin in November 2019, in the presence of Guterres, that decided how to proceed.

A new process was to begin after the elections in the north, which were delayed because of the pandemic and when they were held produced a new leader, who does not want a bizonal bicommunal federation (BBF).

Is there a point to Lute visiting considering Anastasiades insists on a BBF? “Yes, she needs to come to assess the situation and try to bridge the gap,” said Ozdil Nami, the former negotiator of the Turkish Cypriot side, adding that much will depend on Lute’s brief.

“If she sticks to the UN parameters, the UN Security Council resolutions on Cyprus, then Mr Tatar will have to reconsider his position and so will Turkey,” said Nami. For Nami, BBF could remain on the table as long as Anastasiades agreed to a results-oriented process, something the Greek Cypriot side has never committed to.

Former Foreign Minister Ioannis Kasoulides does not think Lute will be here to bridge the gap, but “will be in listening mode.” He said: “My view is that she will not try to impose anything but be more concerned with understanding what the sides are prepared to do, so she can give an assessment to the UN Secretary-General about the prospects of a conference.”

If the leaders “dig in their heels and refuse to move,” there will be no point in a conference, Kasoulides said even though he doubted this would happen. “There are ways to show that you are willing to make moves, without being specific,” he said. This would be what Lute would be looking for primarily in her meetings – indications that the two sides were prepared to move despite their respective rhetoric.

Nami, in contrast, believes she will seek to secure a more concrete commitment to a new process from the leaders. “The main issue that must be resolved is how to define a results-oriented process,” said Nami explaining that this would be the main concern of the five-plus-one conference being mooted.

Without such a commitment he felt it was difficult for things to move. Turkey could accept that the UN Security Council resolutions on a Cyprus settlement could not be changed, but in return it would insist on a results-oriented process, which Lute would have to persuade Anastasiades to accept, he said.

Perhaps this will be left for later, with Lute being content to record the positions of the two leaders at present. One UN source, speaking on condition of anonymity, said Guterres would most probably prefer to wait until the new US administration of President-elect Joe Biden is in place before making any move as US support for a new process would be vital.

Lute arrives in Cyprus on Monday and is expected to have separate meetings with Anastasiades and Tatar on Tuesday.

Our View: Government needs to back Covid measures up with science