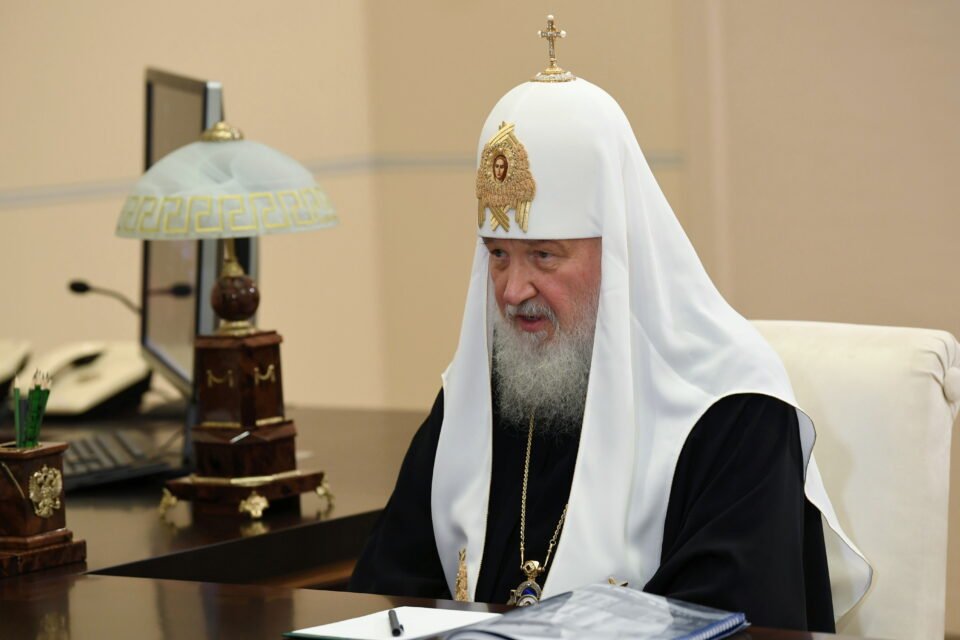 Patriarch Kirill of Moscow and All Russia speaks during a meeting with Russia's President Vladimir Putin at the Novo-Ogaryovo state residence outside Moscow, Russia November 20, 2020. Sputnik/Aleksey Nikolskyi/Kremlin via REUTERS ATTENTION EDITORS - THIS IMAGE WAS PROVIDED BY A THIRD PARTY

With its political and economic ramifications, the schism within the Orthodox church is about much more than religion, and Cyprus has been caught up in the maelstrom

Once again, Cyprus was in the frontline of an international struggle, last week – although this time, it had little to do with maritime boundaries, gas pipelines, or even Turkey.

Nonetheless, the island was in the firing line of a major global struggle, running all the way from Paris to the Donbass, via the Holy Synod of the Church of Cyprus.

“To be blunt,” Professor Vasilios Makrides, from the Department of Religious Studies at the University of Erfurt, told the Cyprus Mail, “there is now a global war going on between the Russian Orthodox Church (ROC) and the Ecumenical Patriarchate. In this, all churches are now having to take sides.”

That church war doesn’t only have a religious aspect, either, but highly political and economic dimensions, too

These have intensified in recent times, as the ROC has begun to enjoy an unprecedented status in President Vladimir Putin’s Russia – and Putin’s Russia has sought to expand its influence, worldwide.

Indeed, Russian orthodoxy is now something of an official Russian state ideology, with its conservative values enshrined in the country’s constitution – and its national security strategy.

Yet, while this may bring major benefits to the ROC and the Kremlin, it also lands other churches in the middle of a political and international conflict they may well wish to do without.

During Soviet times, the ROC’s fortunes went through several phases. In the 1930s, it suffered horrific persecution, but in World War II, it was revived as a national, ‘patriotic’ church. During the Cold War, it then became largely an instrument of Kremlin policy.

Ironically, Soviet dictator Josef Stalin – an avowed atheist – initiated all three of these iterations. He also set up a body crucial to today’s ROC – the Department of External Church Relations.

This was where the current leader of the ROC, Patriarch Kirill, cut his political teeth, an experience that gave him a strong awareness of the church’s international power and opportunity.

Under his guidance, relations between the church and the Kremlin went on to achieve unprecedented warmth.

“Since the fall of the Eastern Bloc,” says Makrides, “The Russian church has developed impressively. They have also tried to be not only a domestic, Russian player, but a global one as well.”

The ROC has benefitted from state endorsement at home, with Putin championing its conservative, ‘traditional family values’ and nationalistic beliefs.

This relationship has now been codified in documents such as the 2015 Russian National Security Strategy. This lists threats to Russian state and public security.

“First comes the threat of foreign intelligence operatives,” Dr Lucian Leustean from the UK’s Aston University, told the Cyprus Mail. “Second, there is the threat of extremist and terrorist groups. Third, are attempts by NGOs and others to destroy ‘traditional Russian religious and moral values’. It’s more important even than organised crime, or natural disasters.”

A ‘Byzantine symphony’ has thus emerged, in which state and church see very much eye-to-eye in Moscow.

The church has also had an opportunity to expand its influence overseas, as Putin has boosted Russia’s foreign presence.

“It is very much in the interests of the president of Russia to institute a good relationship with the church,” professor Victor Roudometof, associate professor of sociology at the University of Cyprus, told the Cyprus Mail.

The giant Russian Cultural Centre in Paris, built in the style of a Russian church, is a well-known example of this ‘synergy’ between the ROC and the Kremlin.

“Any tourists going to the Eiffel Tower must pass by the centre, getting a glimpse first of Russian ‘soft power’ in action,” says Makrides.

The ROC has also invested in the reconstruction of churches and monasteries damaged or destroyed in the Syrian conflict, where Russian military might has been crucial in rescuing the regime of President Bashar Al Assad.

That conflict also established firm relations between the ROC and the Patriarchate of Antioch – one of the most ancient of orthodox churches – based in Damascus.

In Greece, too, Putin has been a frequent visitor to Mt Athos, where several monasteries have been the beneficiaries of ROC investment.

On Cyprus, too, the ROC has constructed new churches for the growing Russian population, while Russian ‘soft power’ benefits from close, pan-orthodox connections.

Russia’s annexation of the Crimea in 2014 and support for pro-Russian separatists in Eastern Ukraine led to a major split in Ukrainian orthodoxy, which had been under the jurisdiction of Moscow since the 17th century.

The Ukrainian Orthodox Church (UOC) wished to end this Russian control, with this achieved in 2018, when the Ecumenical Patriarchate in Istanbul recognised the UOC as an independent – or autocephalous – church.

In retaliation, however, the ROC then broke all relations with the Ecumenical Patriarchate and ex-communicated the UOC.

“The situation in the Ukraine has been a very public controversy involving some of the most powerful institutions in Orthodox Christianity,” says Roudometof. “It is obviously a political issue, exploited by the ROC and by Ukrainian nationalists. The Ecumenical Patriarchate recognising the UOC’s independence also put all the other churches on the spot. They had to pick sides.”

“This raises another issue,” adds Makrides: “the role of the US in all this.”

Washington has backed the Ecumenical Patriarchate since Cold War times – a relationship underscored by the recent visit to Istanbul made by Secretary of State Mike Pompeo.

“He met the Patriarch, but did not meet the Turkish government,” points out Roudometof.

For Makrides, “There has long been a struggle for supremacy going on between the mainly Greek speaking Orthodox world and the Slavic, mainly Russian Orthodox world.”

Seeing the thwarting of Russian influence as a goal, the US has strongly backed the ‘Greek’ side in this.

Meanwhile, Moscow has tried to weaken US influence, boosting the ROC’s presence in the ‘Greek’ sphere, while also undermining the influence of the Ecumenical Patriarchate, which the ROC now refers to as just “the Church of Constantinople”.

This week’s meeting of the Holy Synod in Cyprus showed how this global dispute is now very much a dispute here, too.

While Archbishop Chrysostomos II is known to enjoy the backing of the Ecumenical Patriarchate, “Many bishops have close relations with Russia,” says Makrides.

“While I don’t expect to see a split,” he says, “we shall have to see how those different interests play out now, in what may be some difficult times.”

On Wednesday the majority of Holy Synod (10 against seven) backed the archbishop’s decision to recognise the Ukraine church, but this is unlikely to be the end of the dispute between the two camps.

Why even smart people fall for phishing