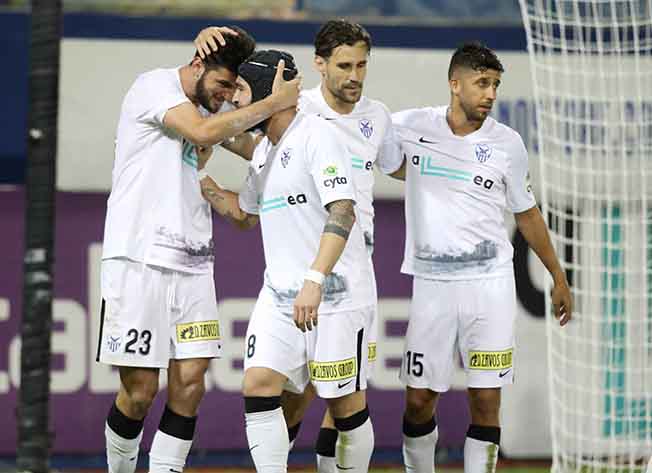 Despite their coronavirus-induced absences, Anorthosis managed to grab a vital win against Enosis on Saturday to top the Cyprus First Division.

Going into the weekend, Anorthosis shared top spot with Apollon – who lost 2-1 to AEL on Sunday in the Limassol derby.

The game between Anorthosis and Enosis featured three penalties within a 50-minute window, with the first goal scored from open play coming in the 73rd minute of the game when Kvilitaia made it 3-1 for Anorthosis.

Before speaking on the game in his post-match press conference, Anorthosis manager Temur Ketsbaia paid his respects to Mario Frangous, a 31-year-old Anorthosis supporter who recently died in a paragliding accident.

“I offer my condolences to Marios’ family for this untimely death, Ketsbaia said.

Ketsbaia also touched on Diego Maradona’s passing last week, saying that “he was an idol for all generations”.

On the game itself, Ketsbaia was his usual reserved self, acknowledging the positive result but not making too much of it at this stage.

“We achieved the objective, three points, that’s all that matters. We cannot say anything more about the game”, the Anorthosis manager said.

Sunday’s Limassol derby was marked by its generally high levels of determination and aggression, particularly by AEL who accumulated a whopping eight yellow cards by the end of it.

AEL have the second-highest number of yellow cards in the league so far with 39 in 12 games. For reference, Apoel are first with 41, while Apollon and Omonia are in the bottom two spots with 20 and 18 yellow cards respectively.

Speaking after the game, AEL attacking midfielder and scorer of the winning goal Sito Riera said AEL “showed character” by managing to score soon after Apollon had equalised.

“It was a tough game, we knew it from the start of the week. A derby is always a derby”, Riera said.

“I am very happy. Everyone wants to play more attacking football and score. I have a freer role and I feel better”, Riera added.

AEL manager Dusan Kerkez was effusive about his players, while at the same time bemoaning the fact that such an important game was played with no fans in attendance.

“It is neither just another game for Limassol, nor a normal derby. It’s a shame we didn’t have fans attending. It would have been a full house and a much better game for it”, Kerkez said.

“We knew we would be facing a quality team. We had a difficult week, three derbies in a row. Congratulations to everyone, my players, and my staff. It was a difficult game. Apollon had a lot of chances”, Kerkez added.

“We want to play good football. We will see what we can do. AEL wanted the game a bit more today and we also had luck on our side”, Kerkez concluded.

Meanwhile, Apollon manager Giannis Petrakis said that Apollon were better than AEL despite the final score, particularly highlighting his team’s superiority in the second half.

“AEL were better than us in the first half despite us having the first good chance to score. In the second half, we were much better than our opponents. We hit the post twice, we missed a penalty, and we had two other good chances. The opponent only threatened to score once”, said Petrakis.

“The result is not exactly unfair overall, but perhaps it’s unfair considering our second half performance. Trust is needed for both the players and the technical team. The league has a long way to go and the big teams will be the ones who will be able to manage any negative moments which I consider to be unavoidable.

“We keep learning from such moments and become stronger from them. We want to be better with every game and get the results we want”, the Apollon manager added.

Elsewhere, Mick McCarthy’s Apoel registered a precious 3-0 win at Salamina, Olympiakos beat Karmiotissa 3-2 at home, while Pafos continued their good run by getting their fourth win in the past five games.

The 12th round of fixtures concluded on Monday night, with Omonia continuing to misfire in a home stalemate against Ermis.

The late kick-off saw AEK win 3-0 away at Ethnikos Achnas.

€4.2m of state funds for ferry service to Greece