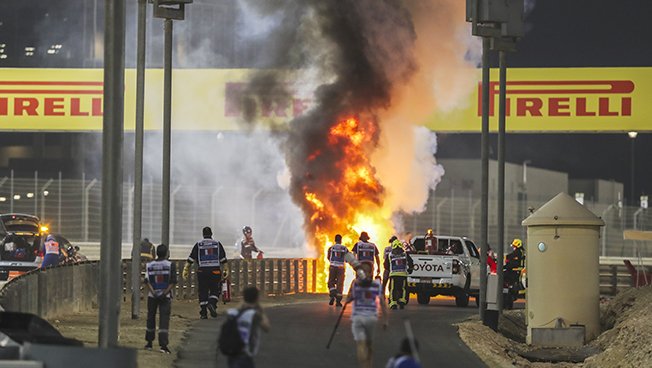 epa08850800 Flames on the crash site of French Formula One driver Romain Grosjean of the Haas F1 Team during the start of the Formula One Grand of Bahrain on the Bahrain International Circuit in Sakhir, Bahrain, 29 November 2020. EPA-EFE/Kamran Jebreili / Pool

Romain Grosjean credited the halo protection bar with saving his life in a fiery crash that ripped his car in two on the opening lap of the Bahrain Formula One Grand Prix on Sunday.

The Frenchman’s Haas speared through the barriers after careering off the track at high speed, with the force of the impact splitting the car in half and setting it aflame.

Grosjean, who clambered out and limped away from the crash, miraculously escaped with only burns to his hands and was being treated overnight at a nearby hospital.

“Hello everyone, just wanted to say I am okay, well sort of okay,” the 34-year-old, his hand swaddled in bandages but his face smiling, said from his hospital bed in a video posted to his social media.

“I wasn’t for the halo some years ago but I think it’s the greatest thing that we brought to Formula One and without it I wouldn’t be able to speak to you today.”

Formula One introduced the halo, a three-point titanium structure above the front of the cockpit designed to protect drivers’ heads from flying debris, in 2018 and it initially attracted controversy.

Grosjean, who is out of contract and likely to leave Formula One at the end of the year, was one of those who was against it at the time, terming the day its introduction was announced a “sad day” for the sport.

On Sunday, his gratitude for its existence was echoed by others in the sport.

“There’s absolutely no doubt the halo was the factor that saved the day and saved Romain,” Formula One’s managing director for motorsport Ross Brawn said.

“There was quite a lot of controversy at the time about introducing it and I don’t think anyone now can doubt the validity of that. It was a life-saver today.

“Undoubtedly we’ve got to do a very deep analysis of all the events that occurred because there were a number of things that shouldn’t have happened,” Brawn told Sky Sports television.

“I think the positives are the safety of the car and that’s what got us through today.”

Brawn said barriers splitting was a problem from Formula One’s far more dangerous past “and normally it resulted in a fatality”.

Brawn said the sport had not seen such a fire in many years, although the fuel cells were now built to be ‘incredibly strong’ and he suspected it was more likely to be due to a ruptured connection.

“It looked a big fire but those cars are carrying 100 kilos of fuel at that stage. I think if 100 kilos had gone up we would have had a massive fire. For me that was a fire of a few kilos of fuel.”

Damon Hill, the 1996 world champion, said he was ‘flabbergasted’ by what he had seen and it was a miracle that Grosjean, a father of three, was alive.

“I’m grateful that the barrier didn’t slice his head up or something like that. It could have been so much worse,” said the Briton.

Red Bull team boss Christian Horner agreed: “Horrendous. An incident like that, I couldn’t see a driver coming out of that,” he said.

“All credit to the FIA. For a car to pierce a steel barrier like that and for the driver to survive, with the fire and everything else, it’s all credit to the job that they’re doing. And they’re right to keep pushing.

“You’re always learning in this business, not just about going faster.

Hamilton also paid credit to the marshals and medical car team, the first on the scene.

“It is an amazing job the FIA have done. The marshals are the unsung heroes every weekend that we get to go out, those guys are there to protect us and they really are incredible in what they do,” he said.