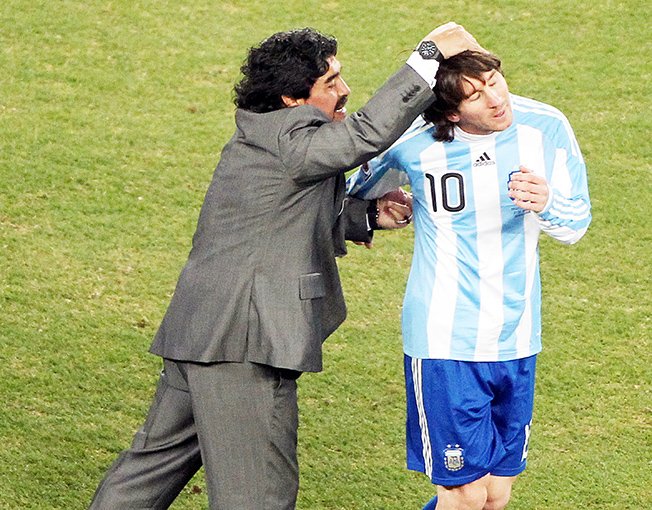 Lionel Messi is the only Argentine to truly live up to being described as the next Diego Maradona so it was little surprise the Barcelona captain should dedicate his goal in Sunday’s 4-0 Liga win over Osasuna to his late compatriot.

Argentina’s two iconic players may be contrasting characters but they shared many traits including a bond with Newell’s Old Boys and the Barca captain removed his shirt to reveal the red and black of the Rosario club before pointing to the sky.

Messi was born a year after Maradona captained Argentina to World Cup glory in 1986 in Mexico but he was at Newell’s stadium as a fan in 1993 when Maradona made his debut for the club.

Messi’s goal on Sunday was striking in its similarity to one Maradona scored that day against Emelec, both players dribbling across the edge of the area before finding the top corner.

It was not the only time Messi imitated Maradona.

His solo effort against Getafe in 2007 was a carbon copy of Maradona’s second against England in the ’86 World Cup quarter-final also remembered for the Argentine’s “Hand of God” goal.

Sparked by a dance past two players near the halfway line, it was finished off with a dribble round the keeper and a slide to the ground as the ball trickled into the net.

That same season, Messi produced his own “Hand of God” moment by punching the ball into the net against Espanyol, prompting an Argentine commentator to yell: “That’s Maradona dressed up as Messi. He has been reincarnated.”

Maradona craved the spotlight throughout his eventful career and was often in the news for his off-field activities.

Yet that often helped his image, particularly in Argentina where thousands of people have defied COVID-19 restrictions to mourn their hero, who died aged 60 on Wednesday.

While Messi sampled the Barcelona night life as a youth, he is a private family man, having had three boys with childhood sweetheart Antonela Roccuzzo who he married in 2017.

The biggest scandal was when he was found guilty of tax fraud, a charge also faced by Maradona whose stellar career was truncated by years of drug use, overeating and alcoholism.

But who ranks as the better player?

Maradona scored 346 goals in 679 matches for his clubs and country in all competitions but two drug bans plus health and injury problems meant he only spent eight years at the very top of his game.

Maradona never won Europe’s top club prize but he did drag an ordinary Napoli side to two Serie A titles and a UEFA Cup triumph, while he was equally talismanic for Argentina and the dominant player at the 1986 World Cup.

Messi is Argentina’s all-time top scorer but luck has deserted him when it matters most. He was on the losing side in the 2014 World Cup final which was lost to Germany in extra time and tasted defeat in two Copa America finals on penalties.

“Maradona is definitely the best player I ever saw, but Messi fans shouldn’t get angry about that because he lives in a different era,” Argentina’s president Alberto Fernandez said earlier this year.

“But you could put Maradona alongside 10 broomsticks and he would still make the team win.”

Former players find it harder to choose who was the best.

Current Atletico Madrid manager Diego Simeone, who played with Maradona for Sevilla and Argentina added: “It doesn’t make sense to choose between them, they played in different eras.

“Diego was much more emotional but Leo scored many more goals. They were both extraordinarily good but very different.”

How to make a model tree house out of cardboard