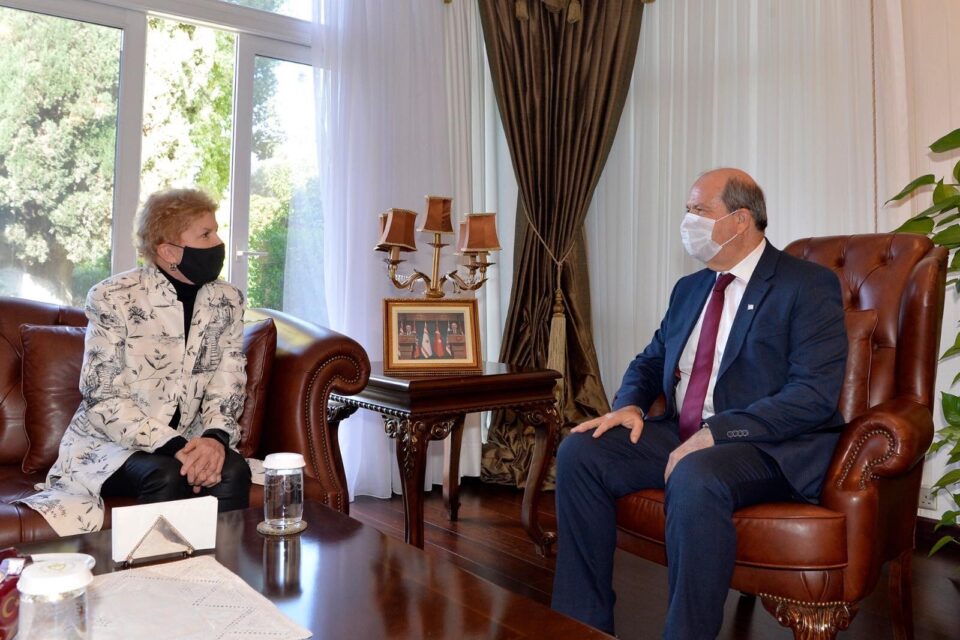 Lute with Tatar in Nicosia on Tuesday

Turkish Cypriot leader Ersin Tatar said he explained his position on a two-state solution to the Cyprus problem and the need for a five-party summit to the UN Secretary General’s special envoy Jane Holl Lute during a meeting with her on Tuesday.

Lute, who arrived on Sunday, is on the island for meetings with the two leaders to probe the prospect of an informal five-party summit.

She first met Tatar in his office in north Nicosia and is to meet President Nicos Anastasiades at 7pm.

After a more than two-hour meeting, Tatar said he explained to the UN official his position on a two-state solution and that realities on the island have changed, citing failure to reach a federal solution during the past 52 years.

Lute made no statements. At the meeting former negotiators of the Turkish Cypriot side Ergun Olgun and Osman Ertug were also present.

Tatar also said he told Lute that a five-party meeting with the participation of the two communities, guarantors Greece, Turkey and the UK, plus the UN, would give him the opportunity to elaborate on his position.

“It will be important for there to be a negotiation process for two states that, based on sovereign equality, will co-exist side by side and cooperate,” Tatar said, according to reports in the north. He reiterated that the talks should not resume from where they left off in 2017.

Tatar added that the other side will not dominate and that the Turkish Cypriots have the right to self-determination and such a climate should be created so that they can use this right. Since 1974, he said, the Turkish side showed goodwill and flexibility in all negotiation processes, as well as during the Annan Plan period and in Crans-Montana in 2017 without finding a response from the other side. “That is why a process on the same basis is not going to work from now on. The Turkish Cypriot people deserve this because they are the real hostage,” he said.

He said that Turkish Cypriots cannot play in international games, citing their isolation and “embargo” economically, politically and in culture. Tatar also brought up the issue of direct flights to the north and called for “more creativity” in opening the community and the Turkish Cypriots to the outside world.

According to Tatar, Lute took meticulous notes during their meeting and asked questions to which she received detailed answers.

He also said the issue of Famagusta was not brought up since this is not part of her mandate, which is to seek fertile ground for a five-party-plus-one meeting.

Tatar said Lute would visit Turkey at a later stage, citing problems with flights due to the pandemic.

Two ways auditor general could be reined in