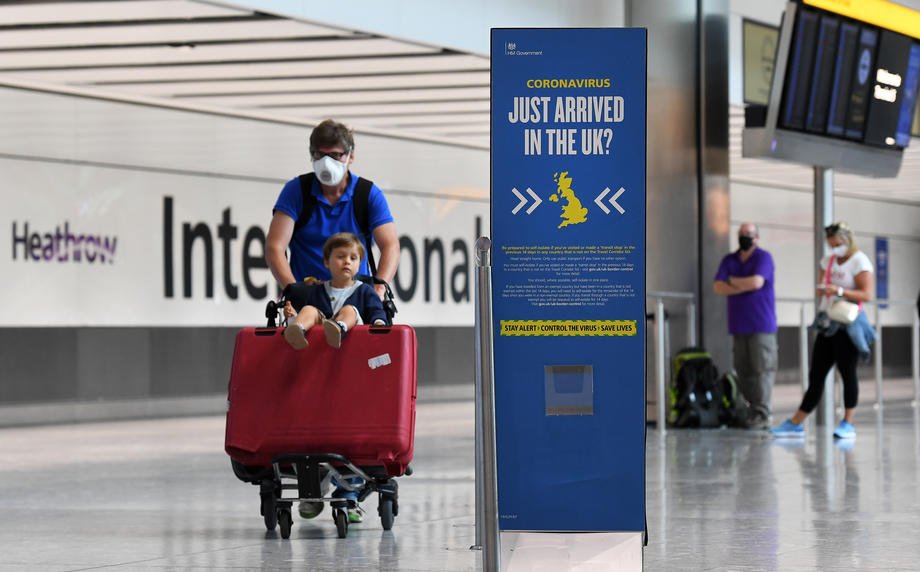 Critics say the government has been too slow to act and previously left borders wide open. EPA-EFE/ANDY RAIN

People travelling during the Covid-19 pandemic should not automatically be considered as high-risk for spreading infection, but should rather be treated in the same way as members of the local population who have not had any direct contact to a person infected with Covid-19, new European guidelines for air travel said.

The Guidelines for Covid-19 Testing and Quarantine of Air Travellers were published jointly by the European Centre for Disease Prevention and Control (ECDC) and the European Union Aviation Safety Agency (EASA) on the request of the European Commission. The document forms an Addendum to the Aviation Health Safety Protocol first published in May 2020.

“Travellers should not be considered as a high-risk population, nor treated as contacts of Covid-19 cases, unless they have been in known contact with a confirmed positive case,” the guidelines said, adding: “Travellers should be treated in the same way as local residents and be subject to the same regulations or recommendations as applied to the local population.”

Based on the latest scientific evidence and information, the document’s conclusions reflect the fact that the prevalence of the new coronavirus among travellers is estimated to be lower than is the case for the general population. In addition, the measures in place in aviation minimise the possibility of transmission during the air travel process.

“This new document is a true European contribution for the benefits of European citizens,” said Patrick Ky, Executive Director at EASA. “Its findings can be important in making many family reunions over Christmas possible.  It builds on the measures we already put in place with the Aviation Health Safety Protocol and reinforces the view that there is no inherent risk in air travel – indeed air travellers are seen as a relatively “Covid-safe” population. We would encourage national decision-makers to take account of the recommendations given here when making their policies.”

Addressed primarily to decision makers at national level and promoting a coordinated approach to decision-making, the recommendations also take account of the current breadth of the pandemic. The fact that the virus is now well established in all European Union and European Economic areas and the United Kingdom, as well as in most other geographical zones worldwide, is an important underlying consideration for its conclusions.

In such a scenario, testing and quarantine have only a limited impact on reducing the risk of spread, particularly with respect to travel between areas of similar risk or when moving from less risky “green” areas to “orange” or “red” areas with greater prevalence of the disease. Indeed, routine testing of passengers in such cases could have a negative impact: diverting resources from more urgent needs such as contact tracing and testing of those who had direct contact with infected cases.

“The scientific evidence enclosed in the addendum to the ECDC – EASA Aviation Health Safety Protocol concludes that the Member States should not focus on screening travellers,” said Andrea Ammon, Director of ECDC. “Testing of incoming travellers would be an effective measure if countries achieved sustained control of the SARS-CoV-2 virus. At this point in time, imported cases are likely to contribute little to the on-going spread of the virus. Therefore, we advise the Member States to focus instead on building robust testing capacities for suspected cases, coupled with the isolation of people who test positive, as well as contact tracing and quarantine of contacts in the community.”

By contrast, EASA and ECDC strongly recommend the advance provision of travellers with information about Covid-19, the epidemiological situation in the destination countries and the measures in place at airports and on-board of planes to prevent transmission. A simplified procedure for obtaining contact information through Passenger Locator Forms, preferably in digital format, and sharing this between authorities as needed, is also imperative.

The primary scenario in which a testing and quarantine regime could be useful, according to the Guidelines, is when travellers move from an area of extremely high incidence – well beyond the lowest “red” threshold of 50 cases per 100,000 on a 14-day basis – to another “red” zone with a much lower infection rate or to any “orange” or “green” zone. The recommendations evaluate different testing/quarantine strategies to adopt in this case, laying out the options for countries to allow them to manage the residual risk of infection being imported.

European Union member states, meanwhile, should always admit their own nationals as well as other Union citizens and their family members who are resident in the country, and facilitate swift passage through their territories for those in transit, the guidelines said.

Police escorts for politicians being cut by around 50%