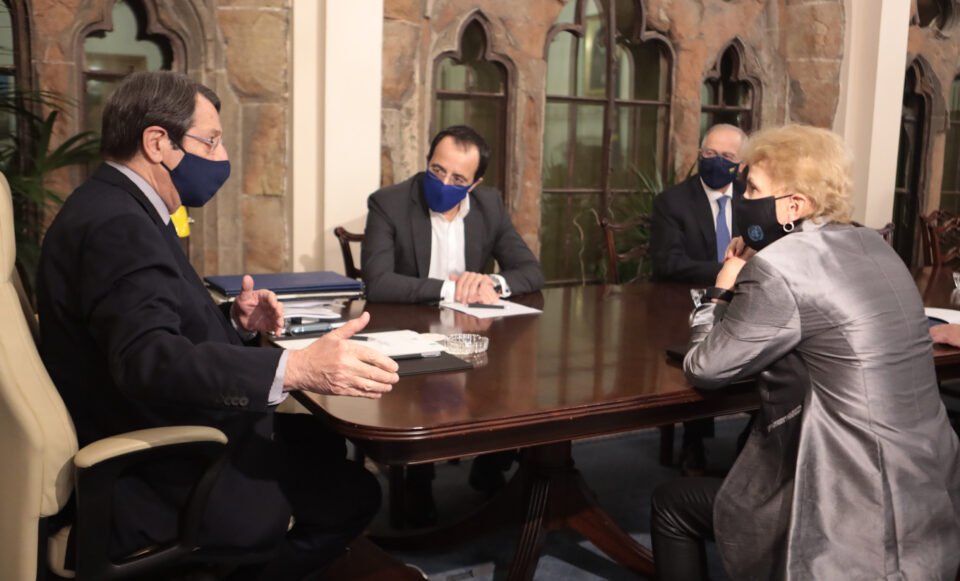 UN secretary-general’s special envoy Jane Holl Lute seems optimistic about the chance of talks being resumed between the island’s two communities despite the opposing views they expressed, reports said on Wednesday.

Lute, who was on the island earlier this week, had separate meetings with the two leaders on Tuesday.

Both leaders expressed their readiness to participate in an informal five-party meeting to be convened by UN Secretary-General Antonio Guterres to discuss the way forward on the Cyprus problem.

Turkish Cypriot leader Ersin Tatar, however, said he explained to Lute his position on a two-state solution which runs counter to the federal solution the two sides had agreed on in the past.

The Cyprus News Agency, citing information, reported on Wednesday that Lute seems to be optimistic that despite the different approaches, and after her round of contacts with all parties is completed and she briefs Guterres, an informal meeting on Cyprus will be convened.

Lute is to also hold meeting with the three guarantors, Greece, Turkey and the UK.

On Wednesday the UN official travelled to Athens for a meeting with the Greek foreign ministry’s secretary-general, Themistoklis Demiris.

She is expected to also hold contacts in the UK and Turkey.

President Nicos Anastasiades on Wednesday participated in a video conference hosted by European Council president (EUCO) Charles Michel, ahead of the EUCO to take place in Brussels on December 10 and 11.

Deputy spokesperson Panayiotis Sentonas said that Anastasiades and his counterparts from Italy, Luxemburg and Latvia exchanged views regarding the better planning of the EUCO in Brussels and the issues on the agenda. The EU leaders will discuss external relations including EU-Turkey relations, further coordination on Covid-19, climate change and security.

Cyprus, Greece but also France call for sanctions on Turkey over its provocative behaviour in the eastern Mediterranean but also in Famagusta. The European Parliament too last week, in a non-binding resolution on the escalation of tensions in Varosha, called on the EUCO to impose severe sanctions on Turkey.

On Monday, Turkey’s seismic exploration vessel Oruc Reis that was off Greece, returned to port, a move deemed by many as an attempt by Ankara to appease the EU leaders prior to the crucial summit next week.

European Commission spokesperson Peter Stano, however, said at a press briefing on Monday, the EU leaders will examine Turkey’s conduct not based on one announcement or one action, but on actions, announcements and behaviour over a specific period. Stano added that everything was on the table.

German Chancellor Angela Merkel, who has been promoting dialogue with Ankara, said this week that the bloc did not make as much progress on the EU-Turkey relationship as it wanted.

Merkel, speaking during a virtual session of the Conference of Parliamentary Committees for Union Affairs of Parliaments of the European Union (COSAC), said the return of the Oruc Reis to port was a “good sign” but pointed out that Turkey was still carrying out drilling activities off Cyprus.

Our View: Pandemic has revived dangerous appetite for state handouts