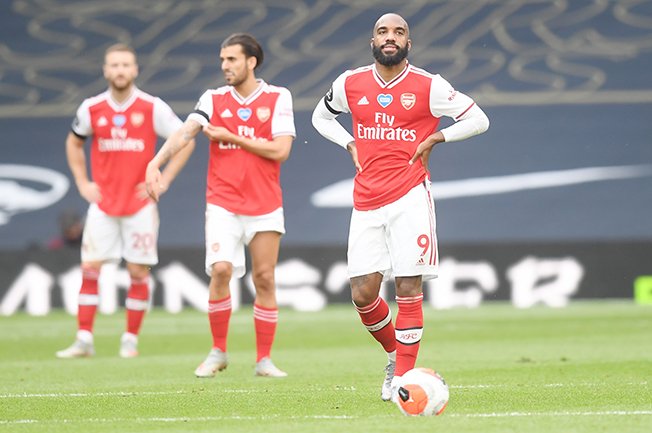 epa08542205 Alexandre Lacazette (R) of Arsenal reacts during the English Premier League soccer match between Tottenham Hotspur and Arsenal FC in London, Britain, 12 July 2020. EPA-EFE/Michael Regan/NMC/Pool EDITORIAL USE ONLY. No use with unauthorized audio, video, data, fixture lists, club/league logos or 'live' services. Online in-match use limited to 120 images, no video emulation. No use in betting, games or single club/league/player publications.

Recent statistics do not make pleasant reading for an out-of-form Arsenal side as they prepare for Sunday’s north London derby at high-flying Tottenham Hotspur.
The Gunners have failed to win on any of their last six Premier League trips up the Seven Sisters Road and have never won an away game against a Jose Mourinho-managed team.

Add in the fact that Tottenham are riding high after a nine-match unbeaten league streak and Arsenal have endured their worst start since 1981, the prospects for Mikel Arteta’s side appear grim. Derbies, however, do not always follow logic.

This one will not feel like the usual red-blooded affair, even if the presence of 2,000 Tottenham fans will help whip up a little of the atmosphere sadly missing when the sides met in an empty Tottenham stadium in July, a match Spurs won 2-1.

Since that rather low-key end-of-season contest, the fortunes of the two sides have been in stark contrast.
Mourinho, blending a potent attack with a defensive pragmatism, has turned Tottenham into title contenders, winning over the majority of fans who were opposed to his hiring just over a year ago in the wake of Mauricio Pochettino’s sacking.

While on occasions Mourinho has let the handbrake off, such as thumping away wins against Southampton and Manchester United, Tottenham’s rise has been built on focus, discipline and organisation and a tough-to-beat mentality.

The way they soaked up Manchester City’s passing game to win 2-0 in their last home game, then ground out a 0-0 draw at Chelsea last week would have delighted the Portuguese manager.

It also rubbished suggestions that Spurs would be found wanting during a tough run of fixtures which also includes a trip to Liverpool in a fortnight.
At home to an Arsenal side languishing in 14th spot, however, fans will expect a more front-foot approach.

Arsenal have three points fewer after ten games this season than they did under Unai Emery last season. He was sacked before Christmas and replaced by fellow Spaniard Arteta.

An FA Cup triumph for Arsenal endorsed the faith shown in Arteta, but things have since stagnated. His team have scored only 10 league goals and appear shapeless.
While it is far too early to talk of Arteta’s job being on the line, he needs an upturn in form quickly and a win at Tottenham would be the ideal place for that to begin.

Champions Liverpool, who trail Tottenham on goal difference, kick off at home to Wolverhampton Wanderers in Sunday’s late game,
For Liverpool it will be an emotional moment as, for the first time since winning their first title in 30 years, they will have fans back on the Kop with the city having been placed in the government’s Tier 2 Covid-19 restrictions.

The last time fans were present at Anfield was on March 11, days before the pandemic forced the shutdown of football.
“It’s a nice sign that these things are possible and I hope that it is just the first step,” Klopp said.

Climate-changing travel: for better or for worse?

Klopp delighted with his fringe ‘Ferraris’ after win over Southampton