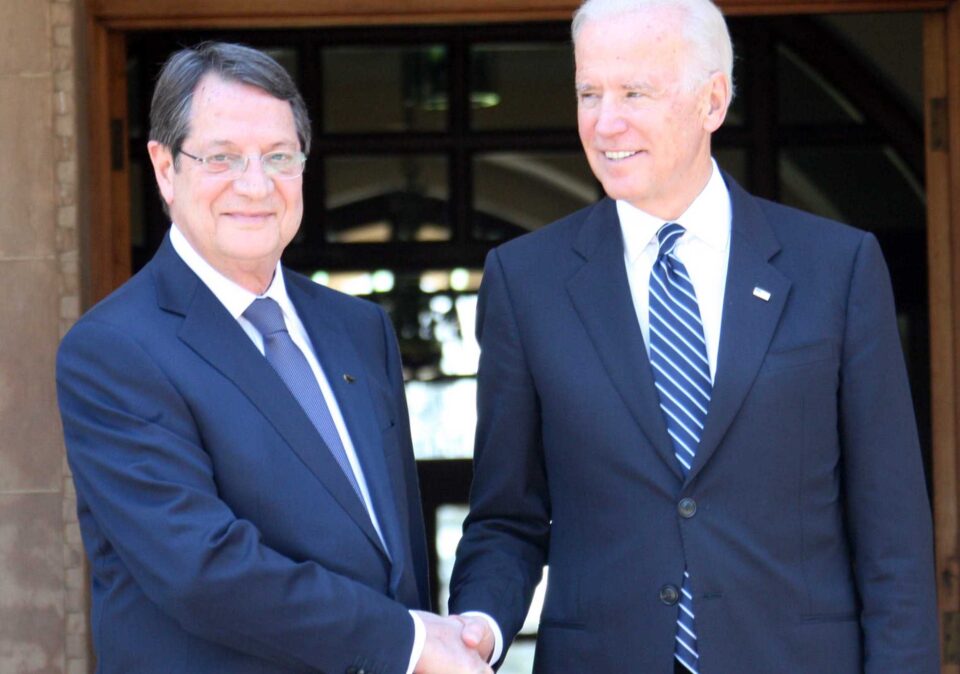 Joe Biden, As Us Secretary Of State, With President Anastasiades In Nicosia In 2014

The new administration will be more supportive than Trump’s, but is unlikely to take a dynamic role

Jane Holl Lute’s visit last week produced nothing other than then usual platitudes, strengthening the view that little of substance can be expected on the Cyprus problem front, before President-elect Joe Biden moves into the White House.

A Nicosia-based UN source said that UN Secretary-General Antonio Guterres would probably feel better placed to try to move things forward once the new US administration has taken over and could lend its support to an initiative.

Whether it will have any desire to do so bearing in mind the much more pressing issues it will have to deal with – Paris climate agreement, Iran, Nato, relations with allies – after four years of the Donald Trump presidency, during which the US gave up its leading role on the world stage, remains to be seen.

One thing that is not up for debate, however, is that both Biden and the man who will take over as Secretary of State, Antony Blinken, have knowledge of the Cyprus problem and the way it affects stability in the Eastern Mediterranean region and Greece-Turkey relations.

Blinken served as deputy secretary of state in the last two years of the Obama administration, and a few days before the US elections, took a stand on Turkey’s rhetoric about a two-state solution in Cyprus. He tweeted: “We regret calls by Turkish President Erdogan and Turkish Cypriot leader Tatar for a two-state solution in Cyprus. Joe Biden has long expressed support for a bizonal, bicommunal federation that ensures peace and prosperity for all Cypriots.”

Biden has always had close links with the Greek lobby in the US and in 2014 became the second vice president to visit the island, referring to Cyprus as a potentially “strategic partner of the United States”, while also referring to the potential that a settlement would unleash for the country.

“Biden knows the Cyprus problem well, since he was a senator and always had close ties with us,” said Ioannis Kasoulides, who served as foreign minister in both the Clerides and Anastasiades administrations. “Before the Annan plan referendum, he expressed his disappointment to me that we were not doing enough to promote it,” he said.

This ties in with what the executive director of HALC (an organisation of Greek American community leaders) Endy Zemenides said in an interview in Greece’s Kathimerini last Sunday. He said that Athens and Nicosia should make specific, but realistic demands of Washington, but avoid demands of the type that ‘put pressure on Ankara’. He asked: “Do Athens and Nicosia know exactly what they want from the Biden administration?”

Much will depend on how the new US administration will treat Turkey. Will it try to woo Turkey back into the Nato fold and take it out of Russia’s clutches to which it moved during the Trump presidency? This would not necessarily be bad news for Cyprus, according to former Turkish Cypriot negotiator Ozdil Nami, who believes if the Biden administration tried to restore regional stability in the eastern Mediterranean, the Cyprus problem would have to be addressed.

“There can be no regional cooperation and stability without Turkey and the Cyprus problem would have to be solved to facilitate better relations and cooperation in the region,” said Nami. “Cyprus holds the key to this regional cooperation,” he added, arguing that the chances of a settlement would be boosted by the US’ positive involvement in the process.

Kasoulides does not believe US involvement in the peace process would be like that of past years. “Dynamic intervention is no longer part of US foreign policy,” said Kasoulides, doubting there would be a State Department official visiting Cyprus to try to bridge the gap between the two sides, as had been the practice in the past. “I do not think we would see someone like (former Assistant Secretary of State) Victoria Nuland, coming here,” he added.

Kasoulides is of the view that the only US involvement we can expect is in the event that the peace process was progressing. “If there are credible efforts for a settlement that need a bit of a push, Biden could intervene personally,” said Kasoulides, adding that this “would depend on the line he takes towards Turkey”.

Akel’s Cyprus problem expert, Toumazos Tselepis, said that with Trump gone, Washington might take an interest in the peace process, but he would not view this as a positive development. “The main player is the UN and the members of the Security Council have been supportive of Cyprus as the many resolutions show,” said Tselepis, stressing that “the main player must be the UN.”

Some level of US involvement would not mean the UN would stop being the main player or that Guterres would be sidelined. Nami argues that the secretary-general would be looking for support from the US and Britain in a new initiative, “for encouragement and empowerment”. He cited the US disinterest in the peace process as a reason for the failure in Crans-Montana, saying Guterres “was burned”, in Switzerland.

Meanwhile Turkey appears to have changed its approach to the West since Biden’s election, seeking dialogue with both the EU and the US. Trump had given a carte blanche to Erdogan but Ankara realises things will not be the same under Biden. Foreign Minister Mevlut Cavusoglu has already expressed Turkey’s desire for dialogue with the US in order to resolve pending issues that were affecting bilateral relations recently.

How bilateral relations between the US and Turkey will evolve under the new administration nobody can say. What can be said with some degree of certainty is that they will impact the Cyprus problem one way or another.