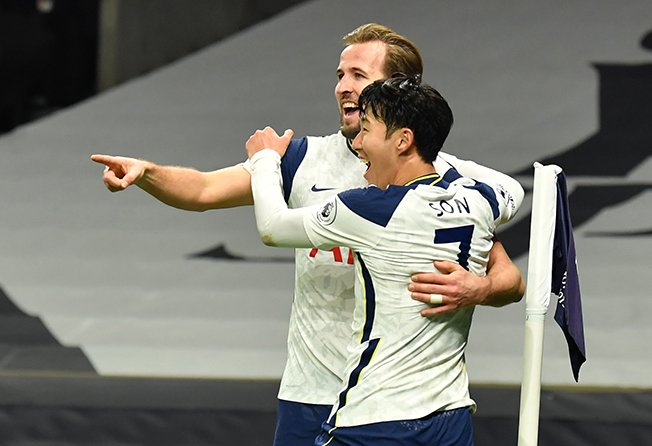 The Premier League’s deadliest current double-act struck again as Son Heung-min and Harry Kane were both on target as Tottenham Hotspur beat Arsenal 2-0 to return to the top of the table on Sunday.

Kane played in Son after 13 minutes for the South Korean to curl home a majestic opener for his 10th league goal of the season, much to the delight of the 2,000 fans in attendance. Son repaid the favour on the stroke of halftime as Kane lashed in his side’s second.

Victory means Jose Mourinho’s side move two points clear of Chelsea who had claimed top spot on Saturday. They have 24 points from 11 games and are unbeaten in the league since losing on the opening day of the season.

Arsenal were ineffective in attack despite having almost 70% possession, although they did threaten in the second half with Spurs keeper Hugo Lloris making a couple of saves.

Pierre-Emerick Aubameyang headed their best chance over as the visitors were unable to salvage anything. Arsenal remain in 15th place with 13 points after their worst start to a season since 1981.

A 90th-minute goal from striker Jamie Vardy gave Leicester City a 2-1 win at Sheffield United in the Premier League on Sunday, lifting the Foxes back into the top four while leaving the Blades rooted to the bottom of the table.

Leicester moved up to third on 21 points from 11 games, while Sheffield United stayed in last place with one point, after stretching their winless league run to 14 games dating back to the end of last season.

Vardy netted a trademark winner as he raced clear through the middle and steered his shot past Sheffield United goalkeeper Aaron Ramsdale after Oliver McBurnie had cancelled out an Ayoze Perez opener for the visitors.

Perez gave the Foxes a 24th-minute lead when he powered in a close-range volley but McBurnie equalised three minutes later as he headed home a John Lundstram corner.

Leicester dominated the first half and twice hit the post through Vardy and James Maddison, with the home side restricted to sporadic raids.

The pace dropped in the second half and when it seemed the Blades had done enough to earn a share of the spoils, Maddison released Vardy with a sublime pass and the striker made no mistake from the edge of the penalty area.

Crystal Palace forward Wilfried Zaha scored twice on his return to the team following illness and Christian Benteke also grabbed a double in the second half as they cruised to a 5-1 win over 10-man West Bromwich Albion in the Premier League on Sunday.

Ivorian Zaha marked his comeback from self-isolation after contracting COVID-19 by curling the ball in on his 200th Premier League start and doubled his tally by tapping home after a fine run from Eberechi Eze to seal the victory at The Hawthorns.

Benteke got his first goal of the campaign with a header and then struck late on as Palace’s Roy Hodgson equalled the Premier League record for most wins for a manager against his former teams, joining Harry Redknapp and Sam Allardyce on 11 victories.

Palace started the game brightly and got the breakthrough as Zaha’s whipped cross after a quick free kick was turned into the net by West Brom defender Darnell Furlong in the eighth minute.

Furlong made amends later in the first half by setting up Conor Gallagher, who rolled in the equaliser for his second goal in as many league games.

But the game changed when promoted West Brom went a man down as Matheus Pereira was dismissed for kicking out at Patrick van Aanholt after a tussle, following the intervention of the Video Assistant Referee (VAR).

Perez goes from last to first in astonishing Sakhir GP