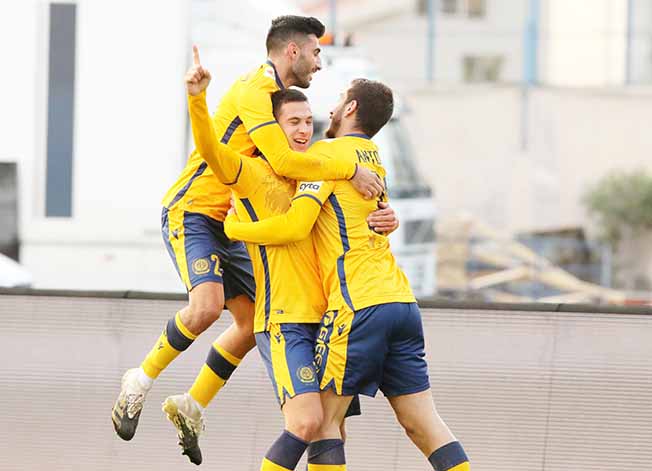 Doxa Katokopias stunned title challengers Anorthosis with a 2-1 home win in the Cyprus football championship over the weekend.

Doxa went ahead twice in the game, with Anorthosis temporarily equalising through a Manias penalty.

Anorthosis manager Temuri Ketsbaia noted that the result did not accurately reflect the two teams’ performances, saying that Anorthosis should not have been beaten.

“The game was lost in the first half. We tried in the second half, we created chances. We definitely did not deserve to lose with our performance. The opposition scored twice through half chances and we failed to score more than once with our own opportunities”, Ketsbaia said.

The Georgian manager also noted that the substitution of Israeli Dor Micha was not because of an injury, but rather a tactical one.

Meanwhile, Anorthosis press officer Demetris Christoforou spoke to Cypriot outlet Kerkida about the game, saying that the club fully backs the manager and the playing staff.

“No defeat is pleasant. We now have a lot of hard work to prepare for Ermis”, Christoforou said.

“The trust we have in the manager and the players is non-negotiable”, he added.

Meanwhile, the weekend contained three high-scoring games, with AEL, Apollon and AEK scoring a whopping 14 goals between them.

“We are rightfully at the top of the tabe”, said manager Kerkez.

“We want to stay there but our focus is on the next game with Olympiakos, we don’t want to look too far ahead”, he added.

AEK scored twice in each half to overcome Olympiakos 4-0, with four different players getting on the scoresheet for the Larnaca club.

“The players played exactly the way we wanted to play”, said manager Avgousti.

“We want to perform the best we can both in defence and in attack”, he added.

Finally, Apollon took a precious 5-1 away win at Enosis, though the result was not entirely indicative of the overall game. Though Apollon were the better side overall, their last three goals came in the final eight minutes of the game.