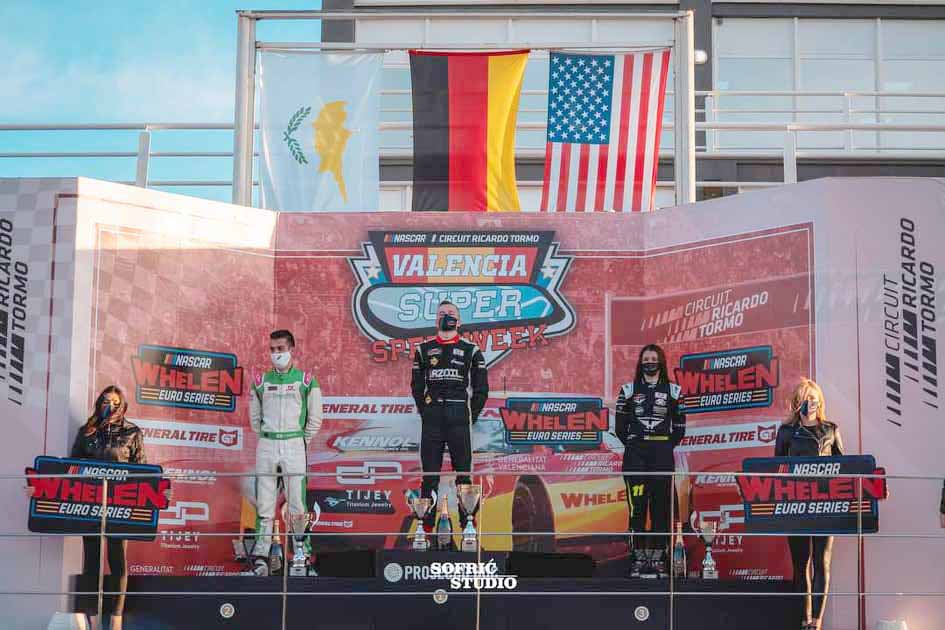 Cypriot driver Vladimiros Tziortzis has finished his NASCAR Whelen Euro Series campaign in style with an impressive performance in the last event of the season at the Ricardo Tormo Circuit in Valencia, Spain.

These were Tziortzis’ finest results this season, allowing the Cypriot to be on the podium for the first time in a non-rookie category. Moreover, Tziortzis’ qualifying placements were third for the first race and second for the Sunday race, solidifying the progress he has made over the season.

In his first season competing in the NASCAR Whelen Euro Series, Tziortzis ended up in fourth place among a total of 26 EURO NASCAR 2 drivers, while finishing in second position among rookie drivers, showcasing his potential as one of the best up-and-coming drivers of his generation.

Tziortzis is sponsored by Cypriot pharmaceutical company Remedica and was part of the Alex Caffi motorsports team, driving their number one-branded Ford Mustang.

The event at the Valencia racetrack was not confined to the two finals on Saturday and Sunday.

The fourth round of the championship took place on Friday with Tziortzis finishing fifth and 15th respectively. These results are deemed disappointing and reflective of the driver’s true abilities.

Tziortzis was also hindered by another driver who hit his vehicle, with the driver in question being penalised for his actions.

Considering the Cypriot driver’s tryout session and qualifying session performances, in which he registered the first and third-fastest laps respectively, he would have undoubtedly finished higher in the ranks were it not for external factors hampering performance during the actual race.

As a rookie driver, Tziortzis participated in the EURO NASCAR 2 category, where more than half of the drivers are also rookies.

Tziortizis tried to make the most of his consistency as a driver, finishing in the top ten positions in all but two of the ten official races he took part in.

Tziortzis has also exhibited great progress throughout his campaign, particularly when contrasting his first five races with the second half of his season. In his first five races, Tziortzis’ best placement was seventh, while in the latter five races he finished second, third, fourth, fifth and 15th.

“I am satisfied with my performance and happy that I could showcase our country by raising our flag at the podium in the last two races as well as in the Rookie Trophy”, Tziortis said.

“It was a very demanding season, particularly as it wasn’t just my first season in such a challenging race format, but because it was also my first season racing in such racing cars, as I had only raced in one-seaters in the past”, he added.

“The team is pleased and so are the organisers of the championship who supported me this season. I have heard a lot of positive comments and everyone is talking about consistency as a driver”, he concluded.

The woman providing almost a life of luxury for stray cats

Mount Everest is higher than we thought, say Nepal and China