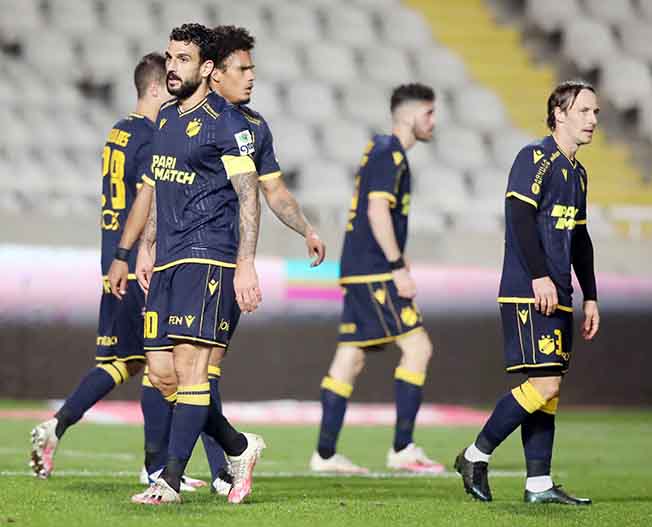 Ten positive Covid-19 cases have been detected at Nicosia football club Apoel following a new round of testing.

Apoel confirmed the total number of Covid-19 cases at the club through a statement on Wednesday afternoon.

The statement explained that the club subjected the entire football department to a round of PCR tests and that training sessions in the past two days have been called off.

Moreover, the club’s premises and training facilities have been disinfected.

This follows Tuesday’s revelation of at least one positive Covid-19 case being detected at the club, with the possibility of further cases pending confirmation.

“Apoel Podosfero Ltd wishes to inform the public that a positive Covid-19 case has been detected at the club”, an Apoel statement said on Tuesday.

“In light of this event, today’s training session has been called off and the entire football department will go through a round of PCR testing tomorrow”, the statement concluded.

Further to the above news, it had been reported that beyond the one confirmed case, a further seven players had been found positive through the less reliable rapid tests they underwent.

These players will be tested again tomorrow. In the event where at least three of these players are positive then Apoel’s next game will be automatically called off.

As a reminder, the Cyprus Football Association’s protocols in regards to positive coronavirus cases state that in the event where four players from the club’s senior team test positive within a seven-day period then their club’s next match will be automatically postponed and rescheduled.

Apoel are scheduled to face Karmiotissa in the Cyprus football championship on Friday, while their next fixture after that is a knock-out Cyprus Cup game against Apollon Limassol on December 16.

Both games are now on the verge of being called off, pending tomorrow’s second round of testing.