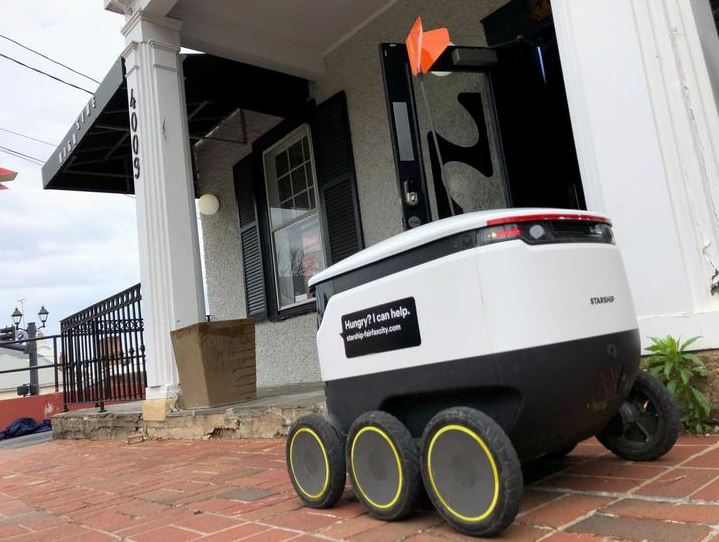 One of the most common uses of such a machine involves household cleaning, with the American company’s iRobot’s two most established products being an automated mop cleaner (Braava) and an automated vacuum cleaner (Roomba). While these two products are now accepted as regular household appliances and come at a fairly affordable price, their origins are much more sophisticated, with their creators having graduated from MIT and worked in the field of space exploration.

Amazon and shipping company FedEx have long been pushing for the legalisation of these autonomous machines, knowing that they will help them cut costs in the long term, as well as maximising the number of delivered packages over an identical time period.

More recently, Amazon developed their own autonomous delivery robot, the Scout. The Amazon Scout has a length of 76.2 centimetres, with a similar height of 73.7 centimetres, and weight of 45 kilograms, with the ability to carry a load of about 23 kilograms. It basically resembles a blue box with six wheels (three on each side) which automatically opens when it arrives at your door to deliver a package.

FedEx’s delivery robot, the Roxo, is somewhat bulkier, close to a metre in length and almost a metre and a half in height. As Aarian Marshall has described it, it looks like a mini fridge on wheels. The Roxo can travel up to 10 kilometres an hour and has been tested in a number of cities so far.

Earlier this year, the two companies supported a bill in Kansas which allowed these robots to travel on pavements, use sidewalks or crosswalks, and travel at speeds of up to 9.5 kilometres per hour, the speed in which humans tend to briskly jog at. The bill was in fact co-written by Amazon themselves, just one of the ways in which American lobbying can blur the lines between corporate interests with legislation and politics.

The bill was protested by a number of groups, including people who work in the freight and shipping industry, saying that these robots have not been adequately tested and that they could soon endanger their jobs.

However, the study also notes that the requirement for these robots to have a transporting vehicle bringing them to a specific area, both to place them but also to monitor their activity, can have adverse effects which cancel out some of their intended benefits.

“The reduction of on-road travel when deploying ADRs comes at the expense of ADR travel on sidewalks. This creates new externalities and potential issues related to pedestrian safety and sidewalk congestion,” the study notes.

“Policymakers and freight planners should carefully evaluate the tradeoffs and potential unintended consequences of new technologies,” the study later adds, denoting how the supposed simplicity of use of such machines is actually a multidimensional issue with knock-on effects that need to be deeply analysed for cities and countries to sign off on them.

In November, the state of Pennsylvania proceeded with the legalisation of autonomous delivery robots. However, not only has the state allowed their usage, but the requirements are much more lenient than originally thought possible.

Autonomous delivery robots in Pennsylvania can weigh up to a whopping 250 kilograms before they have had a single package loaded onto them. Moreover, they can use sidewalks, and be considered pedestrians. The only requirement for them to not invalidate their pedestrian status is to give priority to cyclists and real human pedestrians. In contrast, Washington limits these robots to 54 kilograms without their payload.

Furthermore, delivery robots in the state can travel at a speed of 19 kilometres an hour, significantly higher than the average human walking of about 5 kilometres. This not only means that pedestrians may need to be aware of these bulky robots overtaking them while walking on the sidewalk, but they will also be in danger of colliding with a bulky machine carrying a significant weight of packages travelling at almost four times their own speed.

In October 2019, autonomous delivery robot testing had to cease in Pittsburg, Pennsylvania, due to a number of complaints, particularly from people with disabilities who found the delivery robots a hindrance.

“I (in a wheelchair) was just trapped on Forbes avenue by one of these robots, only days after their independent roll out. I can tell that as long as they continue to operate, they are going to be a major accessibility and safety issue,” said University of Pittsburgh student Emily Ackerman at the time.

The University of Pittsburgh quickly caught wind of the incident and halted any autonomous vehicle testing on their campus. European governments should not take a passive stance on this issue. The European Union must follow the rollout of these autonomous delivery robots in the United States closely and tackle any issues pertaining to this issue in a proactive manner.

While they can solve some accessibility and safety issues, allowing for the delivery in some remote or dangerous areas in a safer and more efficient way, their adoption should not be so easily welcome, let alone expedited. Independent studies, academic findings, experience-led as well as conclusions from the United States and Asia should all be taken into account when similar legislative frameworks are considered by governments here.