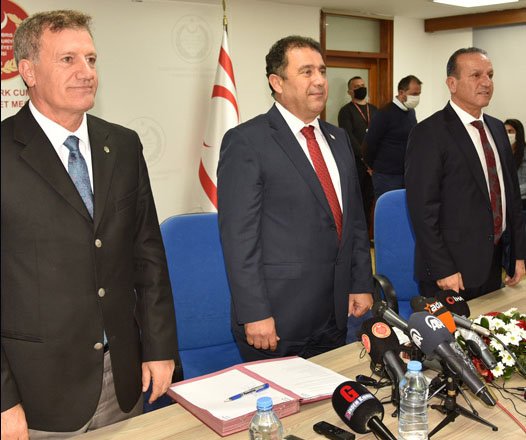 The newly formed coalition ‘government’ in the north said it would work towards a two-state solution and carry on with opening the closed-off area of Famagusta, while it intends on processing around 8,000 pending ‘citizenship’ applications.

The leaders of ruling National Unity Party (UBP), the Democrat Party (DP) and the Rebirth Party (YDP) signed a protocol for the establishment of the coalition ‘government’ and announced they would hold early elections in October 2021.

The ‘prime ministership’ will go to UBP deputy head Ersan Saner. The party will also get the ‘ministries’ of foreign affairs, interior, finance, education, health, communications and agriculture.

Leader of YDP Erhan Arikli, whose party has only two seats in ‘parliament’ will be the new ‘deputy prime-minister’ and ‘energy and economy minister’.

DP will get the ‘ministries’ of tourism and labour.

The three parties announced their ‘government’s’ programme which includes acquiring the Covid-19 vaccine and administering it in the north, starting from high-risk groups.

They also said that one of their priorities was claiming the Turkish Cypriots’ rights in the eastern Mediterranean and continuing with the ongoing procedure to open Varosha under Turkish Cypriot administration in cooperation with Turkey. Efforts, they said, will comply with international law.

Steps will be taken forward for a two-state solution, they said, adding that the three parties would act in harmony on the Cyprus issue. Emphasis will be given to the implementation of the two-state solution because it appears that federal solution would not be possible due to the attitude of the Greek Cypriot side, they said.

Work will be done also to process pending ‘citizenship’ applications to meet the expectations of people who are in the north on a work permit.

Arikli told Diyalog TV that around 8,000 ‘citizenship’ applications were pending including 3,000 that concern people who are eligible because of marriage.

The parties also vowed to pass the 2021 ‘state budget’ immediately after receiving a vote of confidence from ‘parliament’ and set up an economy advisory board to help solve the economic problems faced in the north. They also said they will launch negotiations with Ankara for the economic protocol as soon as possible.

The new coalition was not warmly welcomed by other parties, however.

Head of main opposition Republican Turkish Party (CTP) Tufan Erhurman, as well as former ‘deputy prime minister’ Kudret Ozersay criticised the new ‘government’, arguing that it was formed due to an operation carried out by Ankara. Erhurman also warned that problems will arise if the new ‘government’ grants new ‘nationalities’, hires more people and carries out new land distributions in industrial zones.