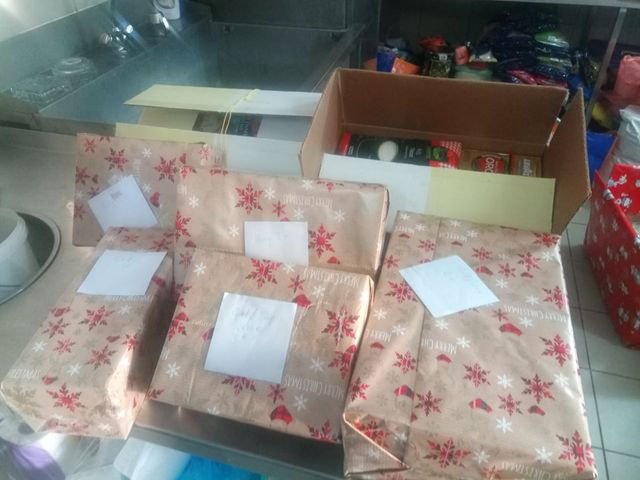 A small group of volunteers led by a Paphos businessman are planning to ensure that Christmas is a special time for needy families this year.

Tony Theo, owner of Chalkies Bar in Coral Bay in Peyia which is about to close again due Covid restrictions, along with a group of volunteers have been helping hundreds of families in the Paphos district since the pandemic swept Cyprus and resulted in a first lockdown, which saw many people lose their jobs in March.

They served and delivered in excess of 12,000 hot, free meals to those that needed it, and all from their own pockets and donations.

“We will do 40 or 50 families if we can. It would’ve been much more before the restrictions as other venues were going to host as well as us,” he said.

Tony is requesting that a couple of days before Christmas, donations of fresh vegetables, fruit, cake, mine pies and all things festive are made, but not fresh turkeys as they have nowhere to store them, he said.

In addition, ‘Trash the Tash for Cash’, a Paphos based initiative that sees men to grow facial hair and shave it off for charity, has been raising money for the Christmas lunch appeal (and the Paphos cancer patients support group), however, a planned shave off event has been cancelled due to the restrictions. Instead, funds raised will be handed over to both charities next week, organiser Laurence Doughty told the Cyprus Mail.

“People can also donate presents for children, we do have some, but you can never have enough presents,” Tony said.

Following the initial lockdown, Tony also started a ‘pay it forward’ scheme which saw members of the public buy vouchers for participating venues which could be redeemed by those in need for a hot meal.

However, due to restrictions on eateries, the initiative has recently been concentrating on donating bags of necessary items to around 30 families.

“We are helping all sorts of people of all nationalities including, English, Cypriot, Romanian, Bulgarian, African and Syrian. Most are from our previous list and have no income, They are now out of work, some from hotels, and they have nothing,” he said.

Families are given two bags at a time and they contain all sorts of staples and non-perishable items, as well as toiletries and sanitary products.

Rice, pasta, cereals, tinned soups, sauces, canned meats, cereals, nappies are all delivered by Tony with the help or around 4 or 5 volunteers from a pool of around 40.

“After the first lockdown, I just felt that I couldn’t abandon these people as they are still struggling. But there wasn’t enough money, energy or resource to carry on with the hot meals so we started the pay it forward scheme. Then the next lockdown came, and it’s on our shoulders to carry on.”

Chalkies will be forced to close on Friday due to the new restrictions, but have decided to use the time to concentrate on helping those in need, delivering food parcels and cooking for those that don’t have the facilities to do so.

They also need donations of non-perishable items in the run up to Christmas.

“The announcement has destroyed our hope of feeding people on Christmas Day at Chalkies and other venues.

Instead we will work out who we can deliver ingredients to and who we need to deliver hot food to and still hopefully help them have a bit of Christmas cheer. We won’t let them down,” he said.

Which cardio delivers most benefits: running, rowing or walking?