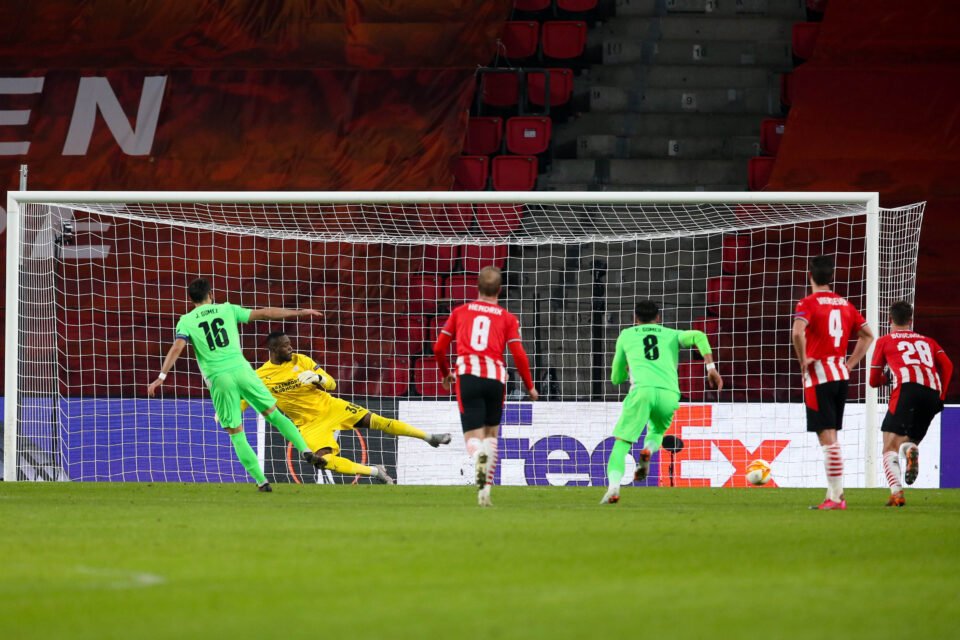 Jordi Gomez misses from the penalty spot in the 69th minute

Omonia bowed out of the Europa League  on Thursday night with a 4-0 loss against Dutch giants PSV in Eindhoven.

The first 20 minutes of the game were quite uneventful, despite PSV’s superior ball possession percentage.

The hosts first big opportunity came in the 22nd minute when Luftner was forced into a goal line clearance to thwart a Malen half volley.

This was the beginning of PSV further asserting themselves and creating a number of opportunities for themselves, starting in the 23rd minute when Fabiano intervened to parry a shot from outside the box from Philipp Max.

Omonia had a promising moment in the 33rd minute when good movement from Tzionis on the left wing saw the young winger penetrate PSV’s area, delivering a low pass towards Sene who couldn’t get a clean, unobstructed shot off.

PSV opened the score in the 35th minute when Malen met a cross from Philipp Max inside the six-yard box, leaving little room for a reaction from Fabiano.

Omonia tried to react in the 37th minute when a Tiago shot from outside the box was parried by Mvogo.

PSV started the second half with pace and intensity, drawing another big save from Fabiano in the 47th minute after a shot from Joël Piroe.

PSV essentially killed the game in the 63rd minute when Dumfries converted a penalty he won himself after being fouled by Lecjaks a minute earlier. Although there was contact between the two players, awarding the penalty seemed a bit harsh.

Omonia were handed a lifeline in the 69th minute when the referee awarded a penalty after Viergever handled the ball inside the area. Unfortunately, Jordi Gomez missed from the penalty spot, sending the ball wide with the keeper beaten.

Omonia had another decent chance in the 90th minute when a first-time Tzionis shot was saved by PSV goalkeeper Mvogo.

PSV reacted almost immediately with Piroe making it 3-0 for the Dutch club in the 91st minute.

Omonia conceded again in the 93rd minute, with Piroe grabbing a second goal for himself, finishing neatly from inside the box.