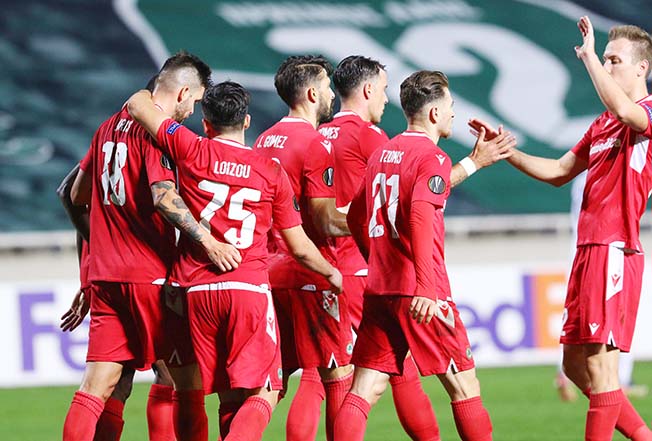 Despite already being eliminated from the Europa League, Omonia manager Henning Berg says he is looking forward to Thursday night’s group finale against PSV in Eindhoven.

“We look forward to the match, it’s good for our development”, said the Norwegian manager in the pre-match press conference on Tuesday night.

The Greens have had an uptick in form in recent days, with the Nicosia club coming off consecutive victories over Paok Salonika in their previous group game last Thursday and beating arch-rivals Apoel for the first time in seven years in the Cyprus first division.

Despite this, Berg remained his usual pragmatic and quietly optimistic self in Tuesday’s press conference, noting PSV’s strength and quality as a side while trying to see the positives for Omonia.

“This is our last game in the Europa League against a traditionally strong side in Holland and in Europe with a big history. Some good players and some good coaches have been there. It’s good for us to be involved.

“We have already played them at home. A very close game. We played a good game against them. Unfortunately, they were able to win the game but we played well”, Berg said .

“I’m sure we will play against a highly-motivated and very strong PSV team. Playing in such games will help us to improve, and we want to get the best possible result”, the Omonia coach explained.

“There will be some changes to the team, but we would like to be competitive. We did really well against Paok last week at home. To win that game was fantastic. Great performance, great attitude, great quality from us. So we are happy to be playing our last Europa League but we would like to compete and continue in this way”, Berg added.

Berg was accompanied by Omonia player Ernest Asante, who spoke on both Thursday’s game, as well as his own development at the club.

“PSV are a good team but we are also a good team. There are many ways to win the game. We have quality and speed as a team”, Asante said.

“We have come a long way and I am sure the manager is proud of our campaign this season. This is our last game in Europe so we will do the best we can”, he added.

“I feel good here and I am gradually adapting more and more. I learn every day and I am enjoying my place in the team”, Asante concluded.

The game kicks off at 7:55 PM Cyprus time and will take place at the Philips Stadion in Eindhoven.