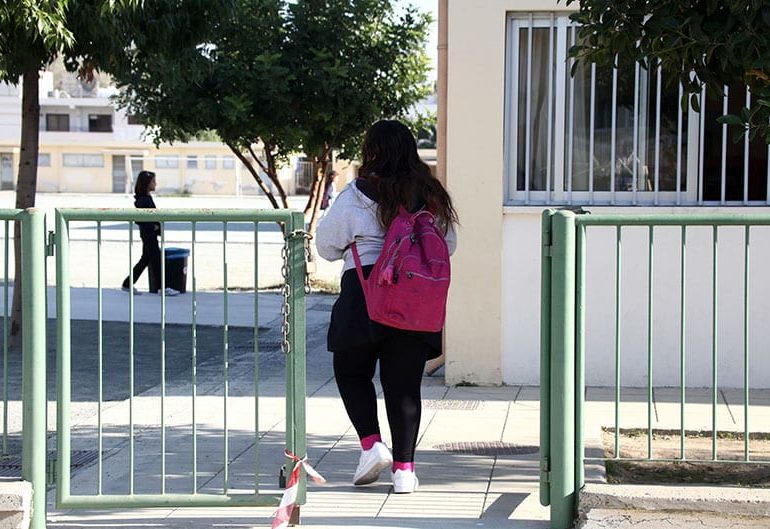 The school from which two boys were lured away in 2018

Responding to a government decision for distance learning in the last three forms in high school as one of a series of new measures to curb the Covid-19 outbreak, secondary school teachers said on Thursday that coronavirus cases are also rising among younger pupils.

As from Monday, classes in lyceums, technical schools, colleges, and universities will be carried out online.

Secondary education teachers’ union, Oelmek, however, says this should also apply for gymnasiums, the first three forms of high schools in Cyprus.

“Colleagues at gymnasiums are upset because, unfortunately, the cases among pupils and teachers are rising,” Oelmek head Themis Polyviou told the Cyprus News Agency.

He added that they were expecting that gymnasiums would also close and pupils would attend their classes through distance learning given the high numbers of coronavirus cases.

Polyviou said he received numerous calls from teachers “who are sounding the alarm about the fact that there is a serious problem in gymnasiums as well.”

Last week the union had said that around 1,000 secondary education pupils and teachers were in self-isolation.

But the decision for distance learning is also causing problems in lyceums as regards infrastructure and the fact that many pupils do not have laptops, he said. According to Polyviou the schools’ equipment is outdated desktop computers.

There are also pending issues as to how teachers who go to several schools within a day will manage work. “Whether they will constantly move and do their distance learning classes from the school they will go to (teach in class) or stay at the school where they are based and work from there,” he said, expressing hope that all issue would resolve soon.

Polyviou also called for a plan B in case the situation deteriorates.

In the meantime, the union announced that free rapid tests will be given to secondary education teachers in all districts on Sunday and urged everyone to go get tested “to protect their own health as well as that of their families and their pupils.”

Matthew Perry counts down to getting hitched