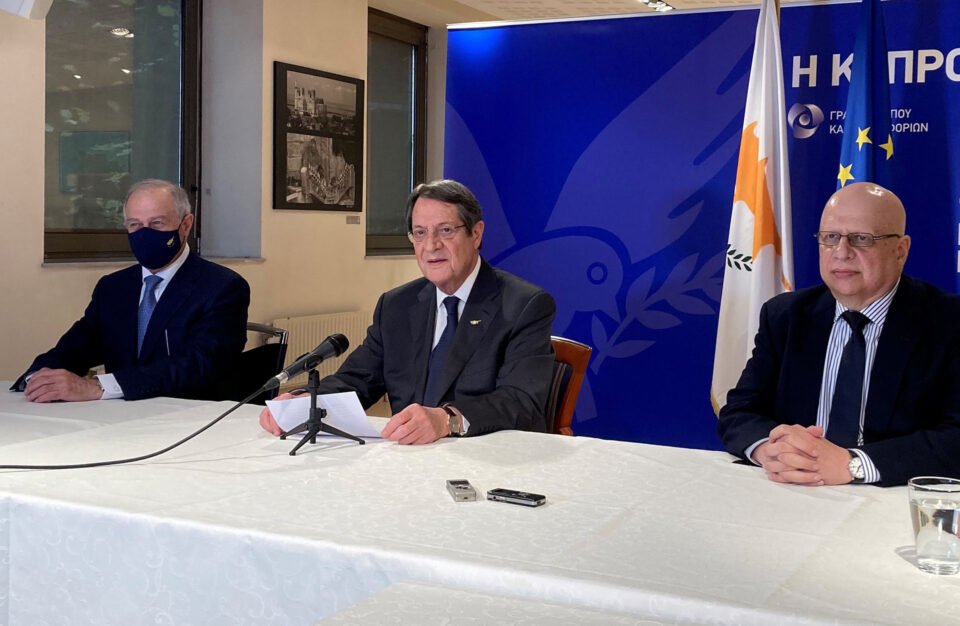 President Nicos Anastasiades on Friday expressed his “absolute satisfaction” with the conclusions of the European Council and the fact that more names would be added to the list for restrictive measures when it comes to illegal Turkish drilling in Cyprus’ exclusive economic zone (EEZ).

Opposition parties however, expressed disappointment with the lack of substantive support by the EU, which has kicked the can down the road a number of times when it comes to sanctions on Turkey.

“Considering the stated position of a small number of member states, that, without ignoring the systematic delinquency of Turkey, consider that the choice of diplomatic dialogue is the appropriate way instead of the imposition of sectoral sanctions, I must say that I am absolutely satisfied with the conclusions of the European Council on the eastern Mediterranean,” Anastasiades said.

European Union leaders agreed on Thursday to prepare limited sanctions on Turkish individuals participating in Turkey’s unauthorised drillings in the eastern Mediterranean, postponing any harsher steps until March after member states disagreed on how to handle Ankara. The EU leaders instead, invited the High Representative and the European Commission, to submit a report on the state of play concerning the EU-Turkey political, economic and trade relations and on instruments and options on how to proceed, including on the extension of the scope of the measures, to be discussed at the March 2021 European Council.

Anastasiades said that, regardless of Turkey’s claims of the opposite, the European Council mentions in its conclusions that Ankara “has engaged in unilateral actions and provocations and escalated its rhetoric against the EU, EU member states and European leaders.”

It also stressed that Turkish unilateral and provocative activities in the eastern Mediterranean are still taking place, including Cyprus’ EEZ.

The European Council also reaffirmed the EU’s “strategic interest in developing cooperation and a mutually beneficial relationship with Turkey” and that the EU is prepared to continue providing financial assistance to Syrian refugees and host communities in Turkey and to cooperate on the responsible management of migration flows towards all member states and on stepping up efforts in the fight against migrant smuggler networks.

Anastasiades added that the European Council, recalling its October 1-2 conclusions, said that the EU remains committed to defending its interests and those of its member states as well as to upholding regional stability. In this respect, the European Council called for additional listings based on its decision of November 2019 concerning restrictive measures in view of Turkey’s unauthorised drilling activities in the Cypriot EEZ, Anastasiades said.

The restrictive measures consist of a travel ban to the EU and an asset freeze. Moreover, EU persons and entities are not allowed to make funds available to the individuals on the list.

They also condemned Turkey’s unilateral steps in Varosha, called for full respect of UN Security Council Resolutions 550 and 789 and said they support the speedy resumption of negotiations, under the auspices of the UN.

“I would like to emphasise at this point that none of the three drafts that were released during the two days (during the leaders’ summit) were satisfactory and their provisions were not related to the final text of the conclusions that was finally adopted,” Anastasiades said.

He also thanked both the Prime Minister of Greece Kyriakos Mitsotakis, French President Emanuel Macron, “and the many other friend-leaders who contributed to the final conclusions.”

The steps did not go far enough for Greece, however, with envoys saying the country expressed frustration that the EU was hesitant to target Turkey‘s economy over the hydrocarbons dispute, as Germany, Italy and Spain pushed to give diplomacy more time.

France, angered by Turkish foreign policy in Syria and Libya, has sought to push the EU to consider sectorial sanctions on Turkey’s economy, but did not have wide support.

Lack of consensus by the EU leaders for harsher sanctions on Turkey disappointed opposition parties in Cyprus.

Main opposition Akel said the conclusions of the European Council “have for the umpteenth time shattered the false hopes cultivated by the government about severe sanctions on Turkey.” The government’s one-sided focus on the issue of sanctions is an ineffective tactic, it said.

Other parties said they expected more from the EU and expressed concerns by the fact that the bloc did not act based on what had to be done.

Turkey rejected the EU’s “biased and illegal” approach and calls on the bloc to act as an honest broker.

In a statement, its foreign ministry said a proposed conference with all eastern Mediterranean countries was an opportunity to tackle maritime issues in the region, adding that Ankara was ready for talks with Greece without any preconditions.

It called on the EU to act “with principles, strategically and with reason”.