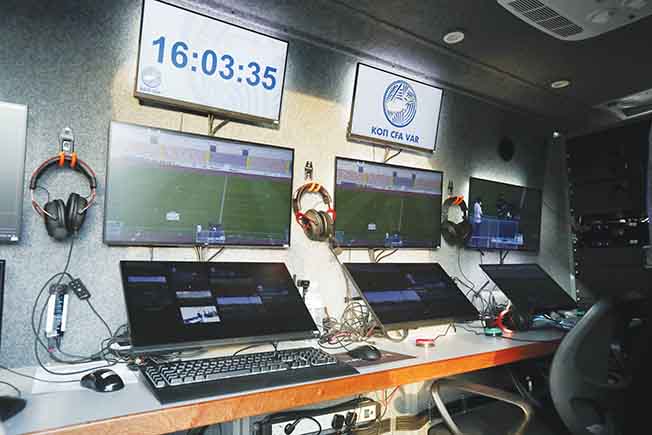 Video Assistant Referee (VAR) technology is on display before making its debut at the Doxa Katokopias v Apollon game in Nicosia on Friday evening. The Limassol side won 1-0 to go top of the table

Cyprus football marked a new era on Friday night when VAR technology was used for the first time in an official game on the island.

Doxa Katokopias faced Apollon in Nicosia, with the Limassol side winning 1-0, thanks to Ioannis Pittas’ strike, to go top of the table

A second match was originally scheduled to take place later on Friday, a fixture between Karmiotissa and Apoel, but the game had to be postponed due to a high number of positive Covid-19 cases at the Nicosia club.

Originally, Apoel had confirmed one positive case, before the number swelled to 11 confirmed cases by Friday, with more tests pending.

As a reminder, four positive cases within a seven-day period mean the automatic cancellation of that team’s next fixture.

On Saturday, Ermis will host Anorthosis at 5pm while AEL will face Olympiakos in Limassol two hours later.

AEL and Anorthosis are separated by just a single point so neither club will want to stumble.

Speaking before the game, Anorthosis press officer Demetris Christoforou said that the club would want to win with the same determination regardless of the team’s previous result, referring to the unexpected loss against Doxa in the previous round.

“We are not worried about the renewal with coach Temur Ketsbaia and we do not think it should be finalised as quickly as the media thinks. We have made our position known and are not expecting any issue to arise”, Christoforou explained after being asked about the future of Ketsbaia at the club.

At AEL, midfielder Davor Zdravkovski spoke to the club’s in-house TV channel, saying that the onus is to continue challenging at the top of the table.

“We have been playing good football since the start of the season and we are enjoying it”, Zdravkovsk said.

Sunday includes games between AEK Larnaca and Salamina, as well as Enosis and Ethnikos Achnas.

At AEK, manager Sofronis Avgousti tried to avoid any room for complacency, despite facing a club in 11th place.

“We want to win this game just like we want to win every other game. Salamina have improved in recent games but we have to assert ourselves against them”, Avgousti said.

The round will be completed on Monday evening when Omonia face Pafos FC in Nicosia.

In terms of the VAR technology now in official use in Cyprus, the Cyprus Football Association (CFA) warned that fans will need to be patient and give the CFA time to work out any kinks.

“Our match officials have gone through a prolonged period of training, including both practical and theory classes, and are now called to implement what they have been taught”, the CFA said in a statement.

The CFA was quick to explain that though VAR technology will be a useful tool in the hands of match officials and will help stamp out serious mistakes which affect the final outcome of a game, it will not replace the referee in charge of a match, rather it will help them enforce the correct decisions.

“VAR does not eradicate mistakes, however, it does decrease serious mistakes to the smallest possible degree”, the CFA explained.

According to statistics from other countries in which VAR is already being used, the accuracy in the decision-making in regards to red cards, goals and penalties, is close to 99 per cent. At the same time, protests from players about referee decisions have fallen by 20 per cent, while player simulation instances have fallen by 40 per cent.

The CFA has clarified that VAR will be looking at instances where a goal has been scored (offside, foul in the buildup, ball out bounds), penalty incidents (including not given or wrongfully given), red cards (not including second yellow cards) and player misidentification.