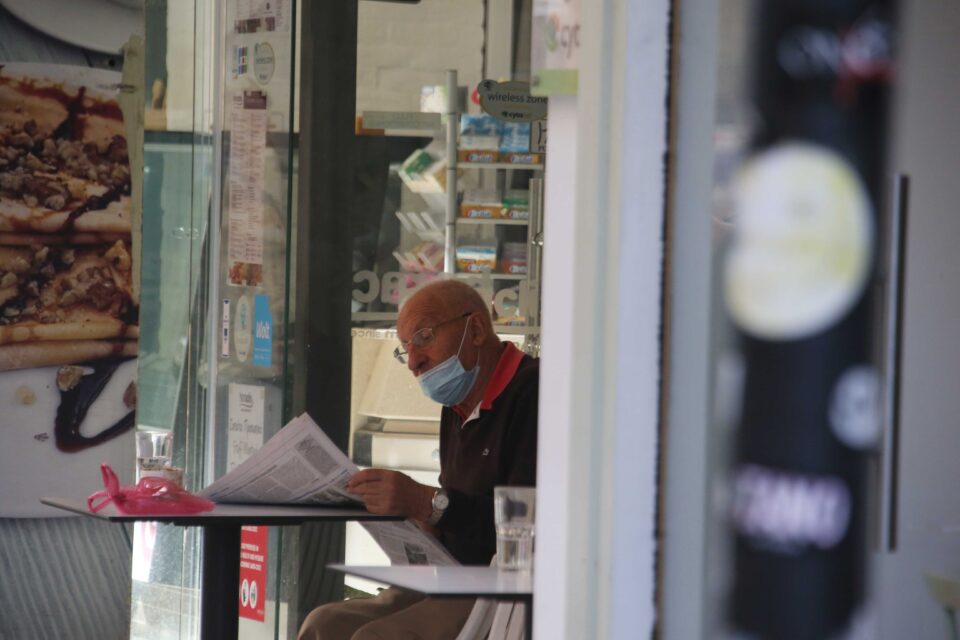 Epidemiologist pleads with govt, says no ‘excess deaths’ in 2020

Just days after new strict measures were imposed to suppress the spread of Covid-19, an epidemiologist exasperated with the apparent one-track one-size-fits-all approach is calling on the government to lift the restrictions, bringing to bear data showing that Cyprus has experienced no excess deaths in 2020 and that all-cause mortality numbers do not deviate from those of previous years.

In an open letter this week to the president, Elpidoforos Soteriades, Associate Professor of Epidemiology and Public Health at the Open University of Cyprus, stresses that “after eight months of experience with the spread of the coronavirus among the Cypriot population, and following dozens of control measures, we are approximately in the same situation.”

Appearing often on television shows, Soteriades cuts a lone figure in a sea of negativity as he strives to inject into the discourse some rational, non-emotive points to shake the public, and policymakers, he says. He’d like to see an end to what he perceives as the closed feedback loop of testing-restrictions-more testing.

In his second direct overture to President Nicos Anastasiades this year, he writes: “We see the coronavirus spreading in the population, as is the case throughout the world. This phenomenon is not odd, because essentially whatever measures we might take, the coronavirus will continue spreading, especially now during the winter when the weather and other conditions favour its transmission.”

In the letter Soteriades, who got his degree from Harvard, laments the ongoing “terrorizing” of the public via the daily announcement of positive samples using the improper and misleading term ‘cases’ which doesn’t correspond to reality” he said, in that in the vast majority of instances, from the thousands of tests processed every day, a positive result does not automatically mean illness, hospitalisation or death.

Whereas the scientist agrees the state has a responsibility to safeguard public health, he disagrees with the measures undertaken and says the proof is in the pudding: “The measures taken contribute minimally to checking the spread of the virus, as evidenced by the number of positive samples detected among the population.”

“After so much scaremongering and alarmist talk of death, this year fewer of our fellow Cypriots have died compared with previous years. Clearly this confirms that both the morbidity and mortality of the coronavirus is very low as has been scientifically documented, and this despite the extensive spread of the virus among the population of Cyprus.”

Appealing to a sense of perspective, he added: “Your Excellency, Mr President. I would like to convey to you the most optimistic news. Having studied the statistics for our country from Eurostat, I would like to inform you that deaths registered in Cyprus this year, 2020, are fewer compared with last year…”

Of those 6,100 or so deaths since the beginning of the year, 75 are attributable to coronavirus out of some 14,500 people who have been found Covid positive through PCR testing.

Data from EuroMomo (European Mortality Monitoring Project) show that in 2020 excess deaths in Cyprus don’t diverge from the long-term baseline from 2015 to the present day.

EuroMomo use a z-score – a measure of deviation from the mean of excess deaths. The website is currently updated to week 49 of the year. A positive z-score indicates excess deaths above the long-term baseline, and a negative value vice versa.

The highest z-score recorded this year was 4.04 in week 21, which is depicted by a small spike on the EuroMomo chart. The Eurostat data shows that 175 deaths occurred that week – May 18-25, which was two months into the strictest lockdown and just a few days before restrictions were lifted on May 21.  There were no Covid deaths recorded that same week when 175 people died.

The high toll was an extreme outlier, says Soteriades. He recently wrote to the ministry of health inquiring about the oddity. They’ve promised to get back to him.

Weekly deaths in Cyprus usually hover a little above the 100 mark. That said, week 5 – (January 27) of 2020 had 163 registered deaths, and week 3 (starting January 13) had 160 registered deaths. There are suspicions that coronavirus has been around a lot longer than originally thought but at the point of the year, the pandemic had not taken hold and no testing was being carried out.

Still, given that overall mortality on the island does not seem to be anything out of the ordinary in 2020, the scientist went on to appeal to the president to “lift the severe control measures, as it is evident they no longer hold any meaning vis a vis the spread of the virus, while at the same time they cause a host of negative impacts.

“By now it is obvious that the government’s fears over the potential lethal consequences of the epidemic in Cyprus have not materialised,” he said.

Rather than hold the entire population hostage, Soteriades advocates for targeted measures: workers at healthcare facilities and nursing homes should be regularly subjected to rapid tests at least once a week, and the same goes for persons arriving at the ports of entry of the Republic.

What’s more, he proposes a review of treatment protocols, where Covid-19 patients would be administered a cocktail of hydroxychloroquine, zinc, azithromycin and vitamin C.

This combination was deprecated by a publication in the Lancet, which later recalled it as fraudulent. But new scientific evidence claims that the above treatment has very high levels of effectiveness among people with active Covid-19.

In addition, he proposes that patients with only mild symptoms be transferred to rehabilitation centres, thus alleviating the stress on hospitals.

“In my humble opinion, all the other measures are not justified,” Soteriades goes on in his letter to the president.

“Besides, the entire planning geared at containing the epidemic with face masks was upended by a recent scientific publication documenting that asymptomatic carriers do not transmit the virus.”

Although he did not specify the study in his letter to the president, the doctor told the Sunday Mail he was referring to that published on November 20 in Nature Communications, a peer-reviewed scientific journal.

Titled “Post-lockdown Sars-CoV-2 nucleic acid screening in nearly ten million residents of Wuhan, China,” the study found that transmission to close contacts from carriers (individuals testing positive but without symptoms) was zero among those who were asymptomatic.

Our View: It’s very clear that for the EU a Cyprus settlement is an imperative

Fragmentation of the people’s team