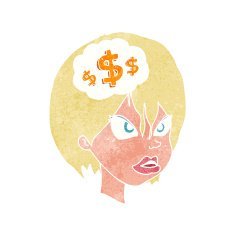 ‘It all depends on how you look at it.’

Don’t you always hate people, who, when you tell them about how things aren’t going well for you, respond with that?

On the other hand, sometimes you look at people who think about nothing but money all day long, and wonder if they ever stop to smell the roses.

Rich or poor, we all have some kind of love-hate-bored relationship with money, and our personal finances often reflect that kind of fundamental attitude usually instilled in us early by family and financial situation.

There are psychologists today who study money and our minds, and some them leverage that to teach us about personal finances.

One is Brad Klontz, an American psychologist who has coined the expression “your mental wealth.” Human beings need security, and we need to feel trusting and safe relations with others. But as these kinds of relationships are abstract and fragile, we often use money to define whether we are satisfied or unhappy.

“You should not believe the ‘Big Lie’ about personal finance. It’s the belief that your financial difficulties are your fault; that they stem from your being lazy, crazy, or stupid, or are beyond your ability to manage. Well, they aren’t, and they don’t. We’ve spent years consulting with couples and individuals struggling with money issues. If we’ve learned anything from that experience, it’s that chronic self-defeating and self-destructive financial behaviors aren’t driven by our rational, thinking minds,” Klontz writes in his book,  Mind over Money.

Klontz defines “money scripts –  patterns of thought and behaviour towards money – as being developed in childhood, often passed down from generation to generation in family systems, typically unconscious, contextually bound, and a factor that drives much of one’s financial behaviours.”

The point is that money scripts in your mind determine how you handle your money, and are often why you handle it badly.

There are four classic bad behaviours that Klontz has observed in examining the ways in which the psyche adapts to the money concept, as discussed in his paper “Money Beliefs and Financial Behaviours: Development of the Klontz Money Script Inventory.”

A significant number of people believe that money is bad, and that caring about money is a sign of weakness. People who follow this script feel that they do not deserve to have money; rich people are greedy; it is not okay to have more than you need.

They wish to belong to the ‘good people’ who do not care about money, because those who do not lose their ties with friends and family. they may self-sabotage their financial success, may avoid spending money on even reasonable or necessary purchases, or may unconsciously spend or give money away in an effort to have as little as possible in their control. Klontz attributes disordered money behaviours such as financial denial, financial rejection, under spending, and excessive risk aversion may result from this type of money script.

The opposite behaviour is Money Worship. This is typified by the belief that “more money will make things better” and it is the most common belief among Americans, according to Klontz.

“Individuals who subscribe to this notion believe that an increase in income and/or financial windfall would solve their problems. However, there is a paucity of empirical evidence to suggest that more money solves life problems,” according to Klontz.

He then makes the rather contradictory assertion (in the paper cited above) that if you earn $75,000 per year or more, “there is no correlation between happiness and money.”

It’s good to know that, as you climb the corporate ladder and earn more each year, you will eventually reach the threshold where it no longer matters… God bless the social sciences…

“Furthermore, increases in income have been found to be associated with increases in distrust and depression. Furthermore, after an initial period of excitement, financial windfalls do not have a lasting positive impact on mood. For example, research has shown that while lottery winners feel good about winning, they are not significantly happier than nonwinners, and even report experiencing less pleasure in ordinary activities than nonwinners,” Klontz explains.

Still another money script defines people who associate money with status: You think your self-worth is the same as your net-worth, as Klontz epitomises.  “These scripts can lock individuals into the competitive stance of acquiring more than those around them. Individuals who believe that money is status see a clear distinction between socio-economic classes.”

Klontz points out that research has shown that being overconcerned with financial success, and being materialistic has been associated with lower ratings of well-being, lower levels of self-actualization, vitality and happiness, and higher levels of anxiety, physical symptoms and unhappiness – and yet money-worshippers go for the gold time after time nonetheless.

The final category comprises those who are ashamed of money, a category Klontz calls Money Vigilance.

“For many people, money is a deep source of shame and secrecy, whether one has a lot or a little. In a survey of 1,001 adults, more than half considered money to be a sensitive topic in their households. Forty per cent of those surveyed reported that they had lied to their spouses about the cost of a purchase and 40 per cent expressed that they felt it was okay for spouses to not share financial information with each other.” People who are secretive with their money may be developing financial behaviours that are unhealthy for their financial future.”

Klontz believes these money scripts may be helpful for therapists faced with certain kinds of mental disorders. He also suggests that husbands and wives who disagree about money may find relief in exploring each other’s feelings about money.

While we personally don’t intend to have this conversation with our better half, it is possible that Klontz’s definitions might make some readers wise to how they handle their finances, and perhaps even lead to better money management.